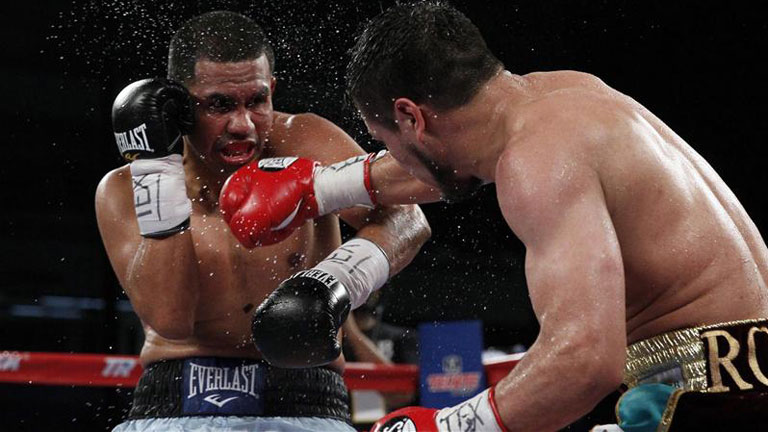 Juan Diaz returned to the ring three years ago with his eyes set on a fifth world championship opportunity. His impressive performance tonight in Arizona against Cesar Vasquez brings him one step closer to his goal.

In the end, the former champ’s smothering offense proved too much for Vazquez. Diaz applied relentless pressure throughout the fight, showing us everything in his arsenal and battering Vazquez until his corner stepped in to save their fighter with fifty-one seconds left in the eighth round.

“I’m very grateful for the continued support from my fans and am ready for my 5th championship,” said Diaz post-fight.

Vazquez showed a lot of heart in the early rounds, trying to match Diaz blow for blow, but he ran out of steam and confidence as the “Baby Bull” got the best out of nearly all of their exchanges.

“I was softening him with body punches, little by little. In the seventh round, I really started connecting with big hooks to the liver,” said Diaz.

Those body shots set up beautiful combinations upstairs that hurt Vazquez and may have led to a stoppage a round earlier if it hadn’t been for the bell.

In his corner, Vazquez was warned by his team that they would throw in the towel if he didn’t show them that he was still in the fight. Turns out he wasn’t, as Diaz staggered Vazquez with a barrage of punches that started with a thudding overhand right. A left body hook, right uppercut combo then sent him reeling and Diaz delivered the final deluge of leather in the center of the ring that let to Vazquez’s corner stepping in.

It was a solid performance from Diaz and served as a reminder as to why he was once the man to beat at 135 lbs.

After the fight, he wasted no time putting all lightweight champions on notice. Anthony Crolla will be defending his WBA World Lightweight Title against Jorge Linares on the 24th of September at the Manchester Arena, the same belt that Diaz held as a 22 year-old, over a decade ago.

He hopes that he will be next in line to fight Crolla, if he comes out victorious against Linares, but noted that he is willing to fight all takers in order to become a champion once more, “Crolla, Flanagan, Verdejo, all of them. Nobody beats me at 135.”