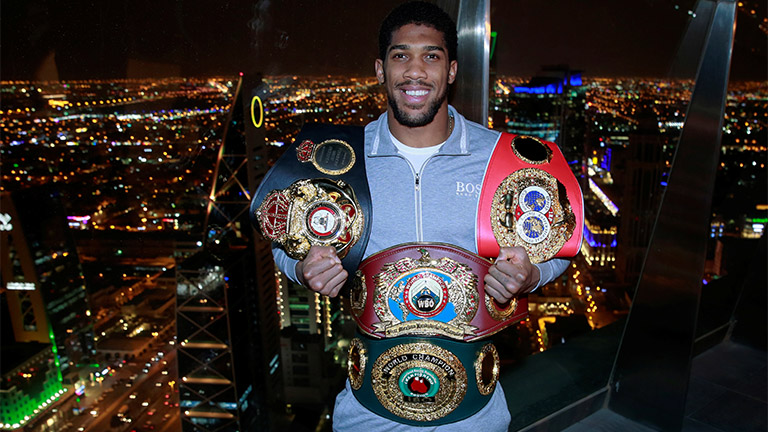 The confusing heavyweight scene leaves Eric Armit wondering if Anthony Joshua will ever fight the Wilder-Fury winner. He looks over the boxing world in his Snips and Snipes column

WHEN 2019 began there was speculation on when Anthony Joshua, Deontay Wilder and Tyson Fury would stop hurling insults and start throwing punches at each other. Well, we had got Wilder vs. Fury but all that did was pose more questions and then up popped Andy Ruiz to spoil the party.

As we look ahead to 2020 the same question is right there with things as clear as mud. Joshua had apparently put things back on track by gaining revenge over Ruiz and the return fight between Wilder and Fury is set for February 22. It looks as though Joshua will relinquish the WBO title and instead defend the IBF title against Kubrat Pulev in April or May. So clarity at last. Well no, as it has already been stated that there might be a third Wilder vs. Fury fight in the summer irrespective of what happens on February 22 so any fight between Joshua and the winner could not happen until late in 2020 and who knows by then Olek Usyk might have intruded into the Wilder-Fury-Joshua equation if he gets past Dereck Chisora, March 7 the likely date for that.

Fury sacks his trainer, Joshua offers to act as a sparring partner for Fury to prepare  him for the Wilder fight, Wlad Klitschko occasionally hints at a comeback, if the WBO title is vacated Usyk could finish up fighting Joseph Parker, Dillian Whyte has been cleared of the suspicion of using a banned substance so will the WBC mandate that the winner of Wilder vs. Fury II has to defend against Whyte throwing a spanner into the whole Wilder-Fury-Joshua situation, with Ruiz and Alex Povetkin also being mentioned as possible opponents for Whyte in his next fight. It’s confusing. Don’t be surprised if at the end of the year as we look forward to 2021 we will be asking ourselves the same questions all over again – but no one can say the heavyweight division is boring.

According to some figures released from the Joshua vs. Ruiz fight the purse for the champion Ruiz was $13 million and for Joshua $85 million. Don’t know how accurate they are and whilst I did not expect a 50/50 split I though Ruiz might get a larger share of the money. Joshua will have had other sponsorship money on top of the $85 million which dwarves the size of the purses Wilder and Fury fought for and will get paid in their return match.

Saul Alvarez has relinquished the WBO light-heavyweight title so that he can choose which division he wants to fight in without any pressure from the WBO. He said of the WBO “I have long enjoyed my relationship with the WBO and appreciate all they do to preserve and enhance the sport of boxing.” Now remind me which sanctioning body was it that anointed Alvarez as their Franchise Champion?

Marcos Maidana has found it impossible to resist the lure of the ring. Now 36 the former holder of the secondary WBA welter title has talked about returning before but has not followed through and the talk has died away. This time he seems to have made his mind up and he will be returning on April 18 on a show promoted by none other than Marcos Maidana. Handy that as there is not much chance of the promoter giving him a tough fight for his return.

Former middleweight and super middleweight champion Felix Sturm has been released from custody. He had been held in a German jail pending charges for tax evasion. To obtain his release he had to surrender his passports – German and Serbian – and come up with 300,000 euros ($334,000) bail money. It seems that the German authorities realised that Sturm would not be able to raise the money to pay off his 5.8 million euros ($6.8 million) whilst sitting in jail but if they released him then he might be able to raise some of it by fighting. There is talk of a fight with Arthur Abraham but I don’t see that as a $6.8 million fight and if he did get more than $6.8 million for a fight then he would owe tax on the anything left over after settling his $6.8 million from that fight. He could finish going in and out of prison.

There are a couple of interesting European tile fights coming up in the New Year. Igor Mikhalkin and Callum Johnson will face each other on March 7 in Manchester in a fight for the vacant European light-heavyweight title and Italian outfit OPI will stage the third clash between Francesco Patera and Edis Tatli for the European lightweight title but no date yet. Patera beat Tatli to win the title then Tatli regained it in a return match only to relinquish it and for Patera to win the vacant title by beating Lewis Ritson. Two 50/50 title matches,

Pole Kamil Szeremeta will now challenge Gennady Golovkin for the IBF middleweight title sometime in March. It was to have been going ahead in February but has been pushed back due to clashes with other major fights. Szeremeta is 21-0 but to show the value of his rating the No. 1 and 2 spots in the IBF middleweight rankings are vacant but Szeremeta can’t go to the No 1 or 2 slot in the IBF ratings because he has not beaten a rated fight but it seems there is no problem in getting to No 3 without facing a rated fighter, which is farcical.

The Congo has produced many good fighters but there are rarely any major fights staged there. That will change on January 18 when local fighter Ilunga Makabu (26-2) and Pole Michal Cieslak (19-0) clash for the vacant WBC cruiser title. In his only other world title fight, also for the vacant WBC title, Ilunga had Tony Bellew down in the first round before being stopped in the third. Cieslak has wins over Youri Kayembre Kalenga and Olan Durodola but will start an outsider against the heavy punching Makabu who has won 24 of his fights by KO/TKO.

The fight that was to mark Guillermo Rigondeaux’s move to bantamweight has had to be postponed as his proposed opponent Liborio Solis could not get clearance of his visa in time. It will be rescheduled. Solis is No 1 in the WBA bantam ratings and Rigondeaux No 2. That may sound OK but as the lowest Rigondeaux has weighed is 119 ½ lbs and that was back in 2010, rating him as bantamweight is yet another WBA sleight of hand trick.

Why can’t they stay away? Riddick Bowe has recently talked about returning to the ring. Former world champion Bowe is 51 and has not fought since 2008 so let’s hope talk is all it is

So sorry to read of the death of Saoul Mamby at the age of 72. If you look at his overall record of 45-34-6 you might question his quality but Saoul fought on long after he should have put his gloves away and that’s where most of those losses came. At his peak he was an outstanding technician a difficult opponent to tackle. He lost on a very controversial split decision to Thai Saensak Muangsurin in Thailand 1977 in a challenge for the WBC super light title but won the title in South Korea in 1980 with a stoppage of local boxer Sang Hyun Kim and made five defences before losing his title to Leroy Haley in 1982. He failed in three attempts to regain the title and became a travelling loser fighting in a number of different countries. He scored wins over Percy Hayles, Mike Everett, Esteban De Jesus, Maurice Watkins, Monroe Brooks, Gary Hinton and many others. RIP Saoul.

Fights to look out for in 2020 include Alex Besputin defending the secondary WBA welter title against Yordenis Ugas on February 14 with Ryan Garcia also on the bill, Caleb Plant putting his IBF super-middleweight title on the line in Nashville on February 18 with no challenger named yet. Mikey Garcia and Jessie Vargas meeting on February 29 in Frisco, Texas, and Amir Khan talking about fighting again in March or April.