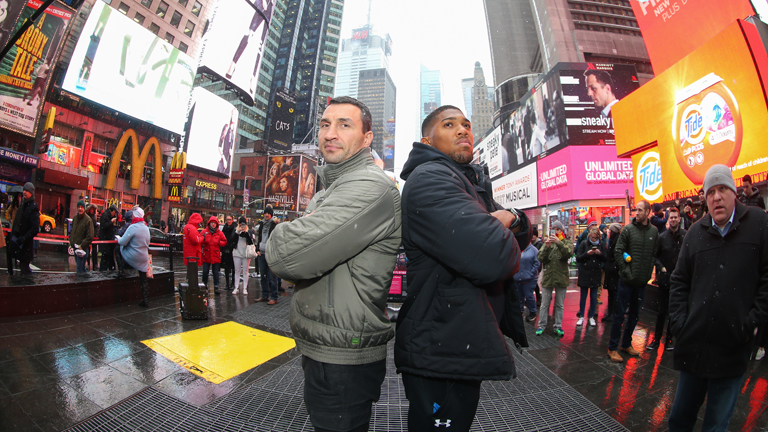 What to consider when picking the winner of Joshua-Klitschko

Joshua-Klitschko is coming. Yesterday we explained – in 12 simple steps – why Wladimir Klitschko can emerge victorious on April 29 at Wembley Stadium. Now we make the case for Anthony Joshua. How do you think it will go?

Round One – Joshua’s youth will be served: Joshua at age 27 is entering his prime, Klitschko age 41 is past his. We are more likely will see an old Klitschko rather than the old one.

Round Two – Joshua has home advantage: The fight is in the UK. Any athlete will tell you that home advantage gives them an edge over their opponent. Klitschko is used to having the crowd behind him, but for this fight he won’t.

Round Three – Joshua is familiar with Klitschko’s style: Joshua served as Klitschko’s sparring partner on the way up. Those sessions probably left more of an impression on him than they did Klitschko. As a young fighter at the time, Joshua probably picked things up that he can now put to good use against the former champion.

Round Four – Joshua has more confidence: Although Klitschko has accomplished more, he has also tasted defeat on a few occasions. Joshua is an undefeated Olympic gold medalist who will enter the ring with a feeling of invincibility, something Klitschko no longer has.

Round Five –  This is Joshua’s destiny: Joshua is generally looked upon as the heir apparent to the throne. His future is ahead of him.  The stars seemed to be aligned for Joshua to be the next in the line of great heavyweight champions.

Round Six – Joshua is more talented: It is quite possible that Joshua could have beaten a younger version of Klitschko. If so, he certainly should be able to handle this older one.

Round Seven – Joshua’s motivation is greater: For Joshua this is the ultimate challenge. Not so for Klitschko who would much rather be participating in a rematch against conqueror Tyson Fury. If Klitschko loses people will attribute it to his being in decline, but if Joshua is defeated he might never be able to live it down.

Round Eight – Joshua has been more active: It has been well over a year since Klitschko fought. Joshua has been fighting all along. Klitschko is not only going to have to cope with Joshua, but he will have to overcome ring rust as well.

Round Nine – Joshua hits harder: Joshua is arguably the hardest puncher in the heavyweight division. He is much more likely to end the contest with one punch than is Klitschko.

Round 10 – History is on Joshua’s side: If boxing history has taught us anything it is that the young Lion nearly always beats the older one. One can easily see Joshua disposing of Klitschko much the same way that Rocky Marciano did Joe Louis.

IN WITH THE NEW: Marciano walks away from the ageing Louis

Round 11– Klitschko is overrated: Based on his body of work, Klitschko is a lock for the Hall of Fame in his first year of eligibility, but few of his opponents were of the quality of Joshua. Had Klitschko been forced to box against higher caliber opponents then his career might not have been nearly as successful as it was. What were Klitschko’s best wins? Find out HERE.

Round 12 – Joshua can handle the pressure of a mega–fight: Some athletes fold up under pressure and others thrive on it. Joshua seems to fall under the category of the latter, a man who will seize the opportunity of a lifetime and run with it.