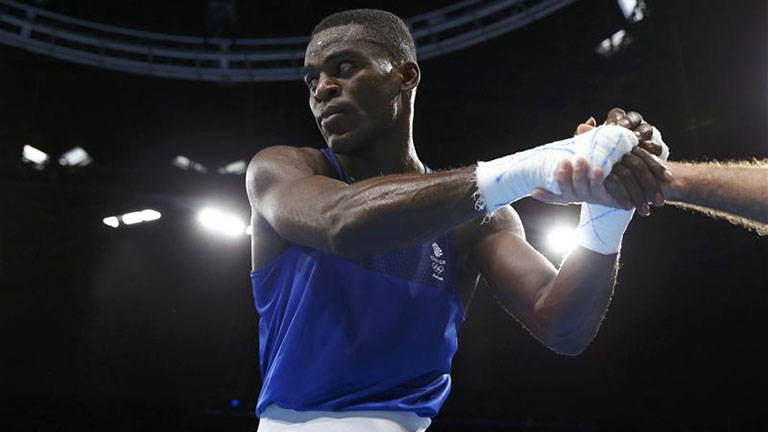 THERE are two sides to a medal. The one that faces outward, the side turned towards the public. The one everyone sees, which gains the boxer fame, and maybe even a lucrative professional contract. Then there’s the side turned inwards, what the medal means to the boxer himself. No one else will quite understand what went into earning that medal, how much effort, how difficult or how demanding the struggle really was.

Joshua Buatsi seems curiously ambivalent about his Olympic bronze medal. He had a magnificent campaign at Rio 2016, blitzing top-ranked opposition, scoring the most spectacular knockout of the tournament on his way to the semi-final. But he didn’t want his run to end there.

“I felt embarrassed to lose in front of everyone, it was a big crowd so I felt terrible losing in front of them,” Joshua said of the semi-final with Kazakhstan’s Adilbek Niyazymbetov. “He was negative and holding, but don’t get me wrong, he was boxing how you’ve got to box to win… The holding, as a referee, if I’m seeing a fighter who’s holding, I’d warn him a couple of times but it gets to a point where you can only warn X amount of times then you have to give that point [deduction].

“I got to the changing room and then it sunk in I’ve come close to actually getting to the finals and then I haven’t made it. So I was upset thinking if this is the only Olympics that I do, then I will just get as far as the semi-finals. Because I fancied myself in the finals. I fancied boxing [Julio] La Cruz again, I’d have done better than I did in the World championships,” he continued.

Buatsi dropped the Cuban when they met in the 2015 Worlds and is sore about missing the chance of a rematch in the final. “I thought I would have done the job on him. To not get there, to not do it, I was upset and I was thinking I’ve got a bronze medal but maybe my life would have changed more if I got a gold. I don’t know. I was thinking you had one chance to get there and you didn’t get there,” he said.

But his efforts did not go unnoticed. He took the first stoppage of Rio 2016 when he halted Kennedy Katende, then knocked out third seed and three-time World medalist Elshod Rasulov before hammering Algeria’s Abdelhafid Benchabla.

“When I’m in tournaments, I don’t ever think of reserving energy. I know I can have five hard fights and be okay,” Buatsi said.

He got off to a good start. “When he [Katende] was hurt I was like there’s no going back to boxing. I’m taking him out straight away. I felt sharp and everything was coming together nicely,” Joshua continued. “I went into my second fight with the same mentality and I knew the opponent was going to be better and I knew I had to put more pressure but be smart with it. I had the will, man.

“I was saying he’s going to break, keep that pressure going and I could see slowly he started holding his feet a bit more, the referee was warning him for holding, he was looking outside the ring and finally I’m going to get to him. The first knockdown, I wasn’t looking for it, I just threw a right hand and he fell down. I was like there’s no way he’s going to be able to recover.”

Rasulov hit the deck heavily beneath that right hand. He was hurt. “I went to the body straightaway to distract him and then I caught him with a headshot again and his legs went,” Joshua recalled. The Uzbek reeled towards him, but Buatsi pirouetted away with his hands up and Elshod fell aside for a second count. “I thought if I do that then he has nothing to hold on to and when he fell down then, I thought this boy hasn’t recovered, referee should have stopped it,” he said.

Having to take matters into his own hands, the Briton stood him up and dropped him finally with a blazing three-punch combination. “I went to his corner because I was thinking this guy might be badly hurt. Even though we’re in there to win it and win it impressively, I don’t ever want to hurt anyone in the ring, long term,” Buatsi said.

He then took on the tough Algerian to make sure of his bronze, saying, “I was too amped for it. This was for the medal. In round three my hands were low. I didn’t get caught, to be fair, it was only when I let him hit me. Other than that I didn’t really get caught. It’s like a comfortable fight. He’s been about for years, to be able to do that to someone of that calibre for me is good again.”

Explaining handing Benchabla a few free shots at his chin, Buatsi said, “I’m dominating him and he’s trying to come back, so for me, he must have had a bit of hope, I just wanted to let him know that there’s no hope here, I’ve won the first two and I’m winning this round… I broke him down. There’s no way he was going to hurt me.”

It was more than enough to get attention. “Social media’s been mad. I don’t even use twitter, now I’m checking my twitter all the time,” the Londoner said. “It’s not just Brits that were watching me, loads of Americans did highlight videos, and the views on them are crazy. I’m like all these people watched it and seen it and they’ve heard my name. It was mad the stuff on social media, British fans and loads of people are leaving positive comments. I didn’t know that many people watched boxing.”

He hasn’t made a decision on his future yet. Staying amateur, he reflects, is “a big gamble”. It’s not just the tournaments, it’s keeping his place on the team, getting fair decisions on the one hand, on the other the fact that he is only 23 years old and has only been on the GB squad for two years. Offers to turn pro will come in. “I’ve been getting loads of inboxes and even at the tournament, someone would pull me over saying this person’s going to talk to you. They’ve all given me their contact details. So it’s just a matter of me having some time and assessing whether I do turn pro or I stay and then get some advice. Even now, as much as some people are saying he’s going to turn pro, I haven’t 100, 100, 100 per cent said I’m going to turn pro yet. So I don’t even know,” he mused, but added, “It’s also striking while the iron is hot.”

As cruel a sport as boxing can be, it is remarkable to see where it can take someone. Joshua came to Britain from Ghana when he was a young child to live with his parents and get an education. It was with immense pride that he boxed at the Olympic Games in a GB vest. He’s got a degree at university to finish, an achievement which, for his school teachers, is even more surprising than him becoming an Olympic medallist.

“I couldn’t talk like this. My vocabulary and the way I talk has had to change. All I knew how to do was to speak slang and use loads of street words that people wouldn’t understand,” he said. “I had loads of fights on the streets before I started boxing, in high school, on the estates, outside in Croydon, stuff like that. If someone from an older year did something to my friend, and my friend was too small to fight him, I’d be like, ‘don’t worry I’d fight him for you.’ I’d fight the older boys and whatever… I was always fair and I always believed that if there was a fight we all don’t jump this person because we can, no, you fight him one-on-one.”

“When I started boxing I didn’t have time for that. Things got more serious, people started hammering each other, stabbing each other, shooting each other and I was thinking, ‘I’m a fair guy I’m not into that’,” he continued. “My friends have been stabbed and shot at and stuff like that. But they’re still living. I’ve got friends that are in prison as well, in and out of prison. They got into the habit when we were younger and they’re just back and forth in it… Loads of my friends have got out of it, it’s just the odd few that are still stuck to it and sometimes I’m like, ‘We’re 23, you can’t still be doing things that we did when we were 15, when we were 14.’ We were little boys. You can’t be living like that.

“As soon as I started boxing I haven’t had a street fight at all. I’ve learned so much discipline that I always try to diffuse a situation. I don’t want it to end up in blows at all.”

Intriguingly he started boxing at around the same time he found religion. “I had a few incidents, mad stuff happened on the streets and my mum was like, ‘Come to church’,” he explained. “Just fights, having problems with people in different areas, not being able to go to different areas, going somewhere watching my back because you don’t know who’s going to jump you or who you’re going to bump into, just things like that. All over little things. Finally I did go [to church] and then I heard a message. It got me thinking and I thought I’m faced with a situation where I can either go back for revenge and do what I have to do or I can just forget everything and try to take a different path. I’ve experienced God on a personal level, I’ve seen him help me in my life.”

His life has followed a completely different path. Any ferocity is now confined solely to the boxing ring. He is an Olympic medallist in high demand but, before considerations of whether to turn professional or not, he has a degree to finish at university. He’s reading management studies and sports science and, in its own way, it’s daunting. “I’ve got two modules until I finish my whole degree,” he said. “Surely I can put the work in. I’m scared though because I haven’t been in education for over a year.”

Considering what he’s overcome, this particular obstacle is one you’d be confident he can handle. “I’ve done what I can do,” he said. “It’s been a good journey.”

The next stage of it is going to be fascinating too.