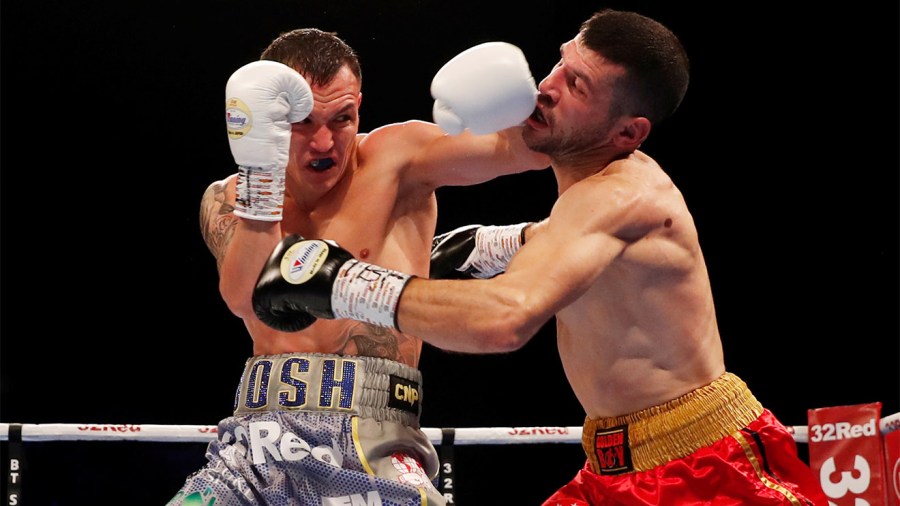 JOSH WARRINGTON needed that. Sofiane Takoucht was not the opponent the IBF featherweight champion wanted. The unheralded Frenchman came to the Leeds Arena with no world title of own, no great renown, just the status of being the kind of mandatory challenger who could cause problems. If that is the champion had half an eye on bigger and better fights in the not too distant future.

A dull showing would also have stalled the momentum Warrington had built up with stirring victories over Lee Selby and Carl Frampton last year. However, propelled to the ring by the drum and pipe band of the Royal Dragoon Guards as well as the deafening cheers of his delirious, raucous crowd of supporters, Warrington delivered.

“Hearing them, I could have run through walls. It makes you proud,” Warrington said. “I felt like man possessed.”

He skipped through the ropes and set about his work with a focused intensity. The French southpaw chopped punches down at Warrington, reluctant though to commit too much weight to his shots. Warrington pressed on the front foot, hacking a hook to the body but mostly reliant on his jab in the first round. But even as he crept forward, the champion exerted pressure on Takoucht. Increasingly flustered, the Frenchman manoeuvred away, rushing to keep some distance between them.

Early on the signs were that Takoucht was feeling his punches. Warrington left no doubt in the second round. A double left hook had the Frenchman holding. He continued to send his right hissing through to hit home. He was hurting Takoucht and slammed the challenger down into the ropes. Sofiane beat the count but Warrington continued to punish him. His left hook connected for his right to fly in and slam Takoucht down to the canvas. The Frenchman rose again, almost shouting at himself in frustration.

But he could not handle Warrington’s power. The right streaked through to the chin but heavy hooks shuddered into Takoucht’s head. They left him shaking back on his heels and referee Bob Williams leapt in to save the challenger with six seconds to spare in the second round.

“Fight night does thing to you mentally,” Warrington said. “I put pressure on myself, saying I need to put in a performance. But I know I’m capable of doing it. I’ve got punch power as well. The way that I’ve been sparring, the way I’ve been hitting the pads and the bags, the way that my strength and conditioning’s been going. My records are through the roof. All I needed to do was land clean.”

Now Warrington can return his attention to world title unifications. “Shakur Stevenson [who fights for the vacant WBO title on October 26] has been banging on about me for ages. He’s gone quiet now. He goes and wins that title I don’t think he wants his first defence against me. They’ll probably want to build him up as a superstar in America. He goes 12 rounds with me and loses, simple as that,” he said. “Now my mindset’s changed a bit. We put on a hell of a spectacle when we boxed Lee Selby at Elland Road [the football stadium in Leeds]. If it were a unification fight over here, imagine that. It would be twice as big.

“I think once we get one of them big names, we become a national hero then. Then we go off travelling.”

With Leo Santa Cruz having moved up in weight, China’s Can Xu is due to fight for a WBA title at featherweight. If he is victorious, he’d be in the frame for a unification with Warrington. “We want to be back at Elland Road, unless something really comes out the woodwork to go to the States,” promoter Frank Warren said. “He [Warrington] is a champion and you look at all those champions, all of them, how many have got a fan base like him? None of them.”

On the undercard Lyndon Arthur and Zelfa Barrett both won intense Commonwealth title fights. Barrett defended his super-featherweight belt in a brutal encounter with Scotland’s Jordan McCorry. Barrett dropped the challenger with savage hooks to the body. He continued to target McCorry’s trunk but the stubborn Scot hung in there, firing back with his heavy right. Until Barrett placed a finishing right uppercut to the head to drop and stop McCorry at 1-43 of the ninth round. Barrett remains one to watch in the domestic super-featherweight picture.

Arthur put strong, determined Emmanuel Anim down with a huge right cross. But Anim stormed back later in the contest, rocking Arthur into the ropes at one point. The Mancunian however had done enough to make sure of a unanimous points decision, flicking out his jab and fielding Anim’s charges as the Ghanaian barrelled into him. Phil Edwards scored 115-112, Bob Williams 117-110 and Steve Gray 117-111, all for Arthur. Those scores however didn’t tell the tale of a thrilling fight. Arthur needed both skill and grit to contain a heavy-handed, determined opponent as he won the vacant Commonwealth light-heavyweight title.

After his original opponent failed a medical, Troy Williamson only had the replacement confirmed at noon on the day of the contest. But Nottingham’s Ben Douglas was combative, snagging Williamson with chopping punches when the Darlington boxer lingered on the inside. But Williamson tenderised his body with books, investing in that work as the rounds progressed. By the seventh round he pinned Douglas in a corner and knocked him down to his knees. Douglas rose but listed over beneath a further assault and referee Michael Alexander stopped him at 1-25.

Olympic bronze medallist Evaldas Petrauskas made an appearance in Leeds. The Lithuanian was a marauding amateur but against Johnson Tellez he barely got out of first gear. He dropped the Nicaraguan in the first round but over the remaining three got him square on as he hacked away with hooks and uppercuts, allowing himself to be caught on occasion but winning a 40-35 decision from referee Michael Alexander.

Flashy Stoke boxer Shabaz Masoud outpointed a much heavier Yesner Talavera. The Nicaraguan had tipped the scales at 9st 4lbs to Masoud’s 8st 10lbs. But the latter had little trouble with him, cycling through his repertoire over six rounds, opening up with combinations as he took a 60-54 decision for referee Michael Alexander.

Unbeaten Doncaster prospect Reece Mould hammered punches into Bayardo Ramos, dropping him in the second round. But the Nicaraguan proved otherwise hard to shift. Mould had to settle for a 60-53 points win from referee Phil Edwards after six rounds.

Moate’s John Joyce outboxed Islington’s Jordan Grannum over six rounds. The Irishman won 60-54 for referee Phil Edwards. Jack Daniel maintained an energetic assault as he harried Jamie Speight for four rounds. The local man dropped Speight flat on his back in the second but the Kingsteignton journeyman rose to see out a 40-35 points defeat. Michael Alexander refereed.

With a left hook Manchester’s Mark Heffron opened a cut over Rui Manuel Pavanito’s eye. The Portuguese opponent was pulled out in the break after the first round. Phil Edwards was the referee. Barnsley’s Callum Simpson took a 40-36 points win for referee Michael Alexander after four rounds with Lithuania’s Kiril Psonko. Sheffield’s Shakiel Thompson beat Lewis Van Poetch, of Haywards Heath, in a six rounder, winning 60-54 for referee Phi Edwards.

The Verdict Warrington delivers in style.