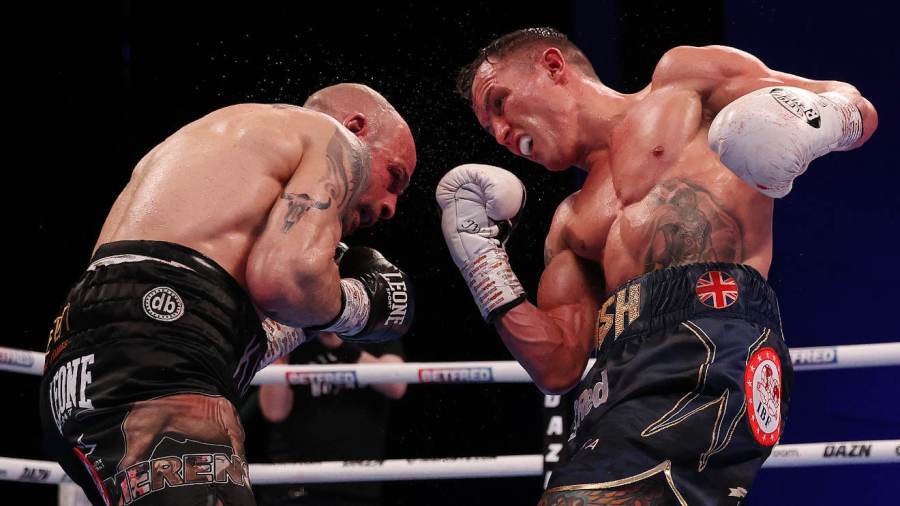 A year and a month after his career was rocked by Mauricio Lara at an empty Wembley Arena, Josh Warrington proved that he is no spent force on the world scene. The type of beating he sustained at the hands of Lara in London can change a fighter forever. But, due to an early clash of heads in his rematch with the Mexican seven months later, Warrington did not have the chance to demonstrate that wasn’t the case for him. However he showed that reports of his demise have been greatly exaggerated as he turned in one of the best and probably most important performances of his 13-year professional career when he dropped and stopped evergreen Kiko Martinez inside seven rounds at a rocking First Direct Arena in Leeds on Saturday (March 26).

Indeed, charged up by the crowd, the Leeds Warrior started like a train and looked like he might even end the contest in the first when he floored Martinez early. It was in stark contrast to his fight against Lara when, behind closed doors and in nigh-on silence, he started sluggishly and was jumped on. “He’s a different fighter behind closed doors,” his promoter Eddie Hearn said.

Due to a combination of head and fist, Martinez’s face was busted up almost immediately. The Spaniard was bleeding from above both eyes and down the middle of his forehead as Warrington went about his work. The ringside doctor was on the apron between rounds as early as the third.

But, as if he felt his back against the wall, Martinez fired back harder and it looked as though Warrington was feeling some of the shots that his opponent crashed home in the fourth. Warrington though looked like a man suffering no ill effects from the first and only defeat of his career and continued to wrestle back the upper hand.

The Spaniard had been well behind in his last fight when he iced Kid Galahad in their sixth round but this time there would be no turnaround as he was stopped on his feet in the seventh after Marcus McDonnell decided one long barrage was enough for him to step in.

Job done for Warrington, who confirms he has nowhere near finished eating at the featherweight top table. Leigh Wood, who was in a ringside commentary position for DAZN in Leeds, is an obvious option while Stateside opponents like Emanuel Navarrete and Gary Russell Jnr would open the door for Warrington’s Las Vegas dream.

“I’ll tell you what’s next,” he said. “Some bread and butter pudding, a cheeseburger, a pint, a party, having sex with my mrs because it’s been about four weeks.

“This wasn’t just for me, my wife and my family and my kids – it was for all these people who supported me.

“We might not do the same numbers as the big boys – AJs and Furys – but I’d rather have an arena full of people than 100,000 tourists any day of the week.”

This win, the presence of those fans, in addition to his apparent inability to be in a bad fight means Warrington has reclaimed his position as arguably the biggest draw in the division.

He knew his career was on the line when he collided with Lara for a second time and he was not afforded the chance to properly revive it that night. Defeat here against Martinez, who he had already beaten on points back in 2017, would have suggested that his prime days were over. It might have even spelt retirement.

But for Warrington, now 31, it looks like the best days of his career are yet to come.