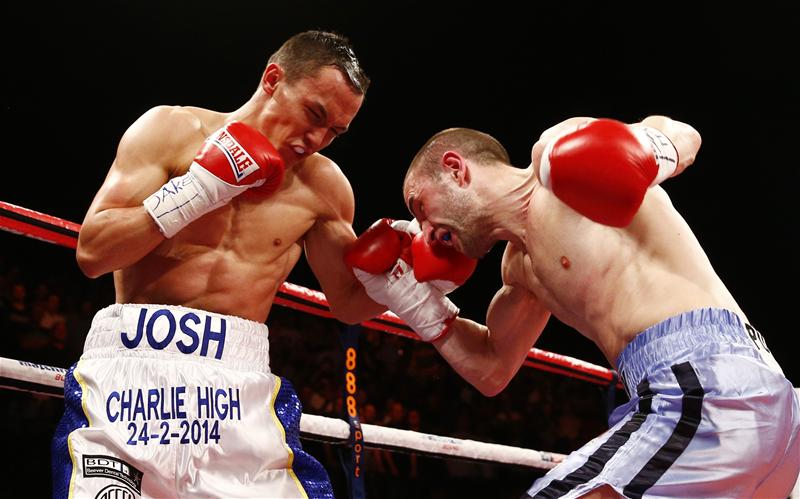 JOSH WARRINGTON has taken a long road to sudden fame. After turning professional in 2009 he won the English title in 2012 but only made his breakthrough when, in rapid succession, he beat Samir Mouneimne in Hull for the Commonwealth featherweight title, defended it against Rendall Munroe in Manchester in April and then won the British title against Martin Lindsay this May.

That triumph came on a Wednesday night but served up lively entertainment with a cracking atmosphere in his Leeds hometown. Warrington expects an even better occasion on October 4 when he returns to the First Direct Arena.

“On a Saturday night, with eight, 10 weeks promotion, it’ll be massive. There was already a massive buzz after the last one, all of Leeds were talking about it, the whole city got behind it. So I think next round it’ll be double or treble the numbers that were there last time,” Josh told Boxing News.

“We’ve not had much glory days with football,” he added. “People like to celebrate someone who’s doing well.”

The wait, Warrington insists, has been worth it. “It’s been a blessing in disguise, I’ve not had it handed to me on a plate. I had to work. It’s like I’ve done my apprenticeship. I won an English title, a Commonwealth title and British title. I waited patiently. I’ve never called anyone out. I just boxed who’s been put in front of me and took my opportunites when they’ve come,” he said.

“It’s always been my dream to win the British and I won it in quite quick succession [after the Commonwealth]. I’m buzzing that I’ve done that.

“With that kind of fanbase you want to keep on fighting and making nights like that, they’re memories for life.”

For don’t miss the latest issue of Boxing News available to download on our app from iTunes, Google Play and www.pocketmags.com.