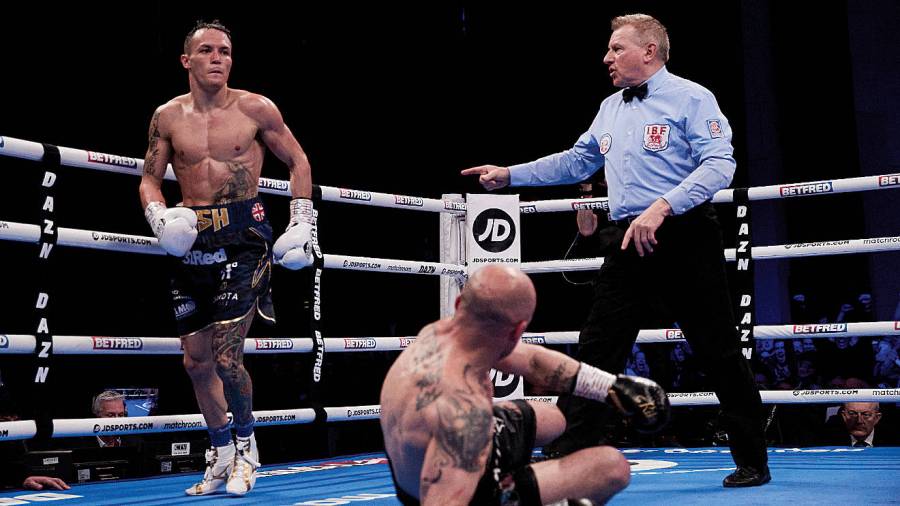 IT WAS all or nothing for Josh Warrington, who not only won back his IBF featherweight title from Kiko Martínez, but his spirited final onslaught to force the stoppage may have rescued his career on Saturday. There was a price to his victory at a packed First Direct Arena, however. He suffered a broken hand in the third round and a broken jaw in the seventh, from a right hand by Martínez a mere 30 seconds before referee Marcus McDonnell rescued the Spaniard. So, his declared first post-fight plan of ‘bread and butter pudding, a cheeseburger and a pint’ will have to wait, after he underwent an operation to wire his jaw back together on Sunday morning. Instead, he was drinking porridge from a mug.

The future, though, is looking bright again for Warrington. His career stalled and then fell apart during the pandemic, as he failed to box in 2020, before being stopped by Mauricio Lara behind closed doors in February 2021. His rematch with the Mexican, seven months later, ended in a technical draw.

It showed how Warrington’s sights had shifted that he was bidding to win a title he thought so little of 14 months ago that he gave it away, seeing it as a hindrance to making bigger fights.

But back in front of a packed house at an arena he was boxing at for the 11th time against an opponent he had beaten before at the same venue, there were signs of the stress he must have been feeling and there was barely any feeling-out process.

Warrington began at a furious pace, seemingly intent on getting rid of Martínez as quickly as possible. He speared Martínez with jabs and opening up with a series of hooks. A wide left hand seemed to split Martínez’ nose, with the Spaniard complaining about a clash of heads – he would have more complaints about that later.

But Warrington did not let up and a big right sent Martínez to the canvas.

Martínez was warned for hitting on the break and then landing one after the bell, but Warrington rushed out again at the start of the second round. This time Martínez took it and, backed up against the ropes, he began firing back.

At the start of the third round, Warrington looked to pace himself for the first time and establish his jab, although Martínez accepted the invitation to come forward, throwing hooks over the top of Warrington’s guard.

Martínez was starting to look banged up, though, and Warrington forced him back to the ropes again in the fourth, trying to create an opening. There was more control in the fifth, as Warrington moved away and walked Martínez into a steady stream of counter punches. Cut over his left eye and with a badly damaged nose, Martínez was lifted off his stool by his cornerman at the start of the sixth.

Martínez came forward at the start of the seventh round but Warrington landed two big rights that staggered the belt-holder. Martínez landed a big right in response, but Warrington fired a right that sent Martínez back to the ropes.

Warrington followed him there, throwing everything into a furious final attack the prompted McDonnell’s intervention at 2-12.

The broken jaw could slightly limit Warrington’s options. Leigh Wood, who also holds a belt, would be the obvious next fight but with Wood intent on fighting at the City Ground next, the home of Nottingham Forest, the window for a fight there will be June or early July.

Another option could be to go to America to face Léo Santa Cruz or Emanuel Navarrete.

“He would take 10,000 plus to Vegas,” promoter Eddie Hearn said. “I know Vegas is a wild place but they’ve seen nothing like it.”

Ebanie Bridges won the IBF bantamweight belt with a unanimous decision over María Cecilia Román, of Argentina. British judges have had bad press over recent months (and years) but the 100-91 scorecard of American Don Trella for the Australian, not giving the belt-holder a single round, was awful. Trella, let us not forget, scored Saul “Canelo” Álvarez’s first fight with Gennady Golovkin a draw, which included giving Álvarez the seventh round, a round that looked so one-sided to Golovkin that even Adalaide Byrd gave it to him. The other two judges, Phil Edwards and Alejandro Lopez Cid, scored it 97-93.

Bridges’ workrate in the first half of the fight saw her build up a big lead. Román, 39, took time to warm to the task and, while she came back in the second half, it was not enough. By the eighth round, as Bridges tired, she left herself wide open for Román’s counters as the Argentinian finished well. The referee was Bob Williams.

Maxi Hughes took a wide unanimous points decision over Ryan Walsh to continue the fine autumn to his career. Walsh’s main problem was that he had spent most of his career boxing as a featherweight. Hughes controlled the distance and controlled the fight. In the 10th round, a clash of heads left Walsh cut on the hairline. But Hughes was never troubled and cruised to his decision. The scores were massively one-sided, with Jerome Lades giving Hughes every round in his 120-108 card. Marcus McDonnell give Walsh a round (119-109), while Grzegorz Molenda gave him two (118-110). The referee was Steve Gray.

Dalton Smith stopped Ireland’s Ray Moylette in the 10th and final round, but Smith rode his luck as he was docked two points in the seventh by referee John Latham and was then warned again for a low punch in the eighth.

Smith made the running, beating Moylette to the punch in the first three rounds and then getting through with some harder punches in the fourth as he began to sit down on his punches.

By the sixth it was getting very one-sided, as Moylette, who had only boxed 65 seconds in more than three years, just walked forward taking punches.

Things took a dramatic turn at the start of the seventh, though, as Smith landed a low punch and, as Moylette dropped his hands in pain, he was nailed by a left hook that dropped him.  After a lengthy break, Latham decided that docking two points was a sufficient punishment.

Early in the 10th, a left around the ear dropped Moylette. And when another left hook felled him soon after, the towel came in from his corner at 0-49.

Australian Olympian Skye Nicolson moved to 2-0 as a pro as she outclassed the brave but limited Bec Connolly over six-twos at featherweight.
Nicolson landed punches at will, while it was tough to remember Connolly landing a single punch as she came forward but couldn’t get close. Referee Mark Lyson scored it 60-54.

Calum French recorded his second win and first stoppage of his professional career as he stopped Belgium’s Angelo Turco in the third round of a scheduled six-rounder at super-lightweight. French seldom bothered with a jab and instead leading with big lefts that often found the target. The end came at 1-11 of the third round, referee Gray waving it off at the moment the outgunned Turco’s corner threw in the towel.

Mali Wright, from Leeds, edged past Sheffield’s Luis Palmer by 39-38 on referee Lyson’s card at cruiserweight, four weeks after they had fought out a draw.

Southpaw Cory O’Regan, a lightweight from Yorkshire, moved to 6-0 with a 60-54 points win over Poland’s Jakub Laskowski, according to referee Gray