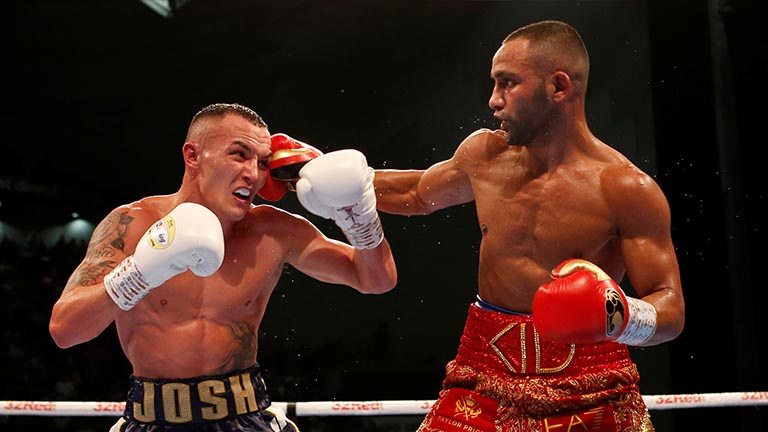 JOSH WARRINGTON admitted he “had a bit of sulk and a bit of moan” as his hopes of a unification bout were dashed for now but the Leeds fighter hopes his patience will eventually be rewarded.

The IBF featherweight champion was eyeing fights against the division’s three other titlists after squeaking past mandatory challenger Kid Galahad in June – with WBO belt holder Oscar Valdez top of his wish list.

Valdez, though, has decided to relinquish his strap and move up a weight class while a bout against Gary Russell Jr or Leo Santa Cruz – holders of the WBC and WBA crowns respectively – was not forthcoming.

Warrington, who has won all 29 of his professional contests to date, will therefore make the third defence of his world title against unheralded Frenchman Sofiane Takoucht on October 12 at the First Direct Arena in his hometown.

Warrington told PA: “I had a bit of sulk and a bit of moan about the fact it’s not happened, slagged all the other fighters off.

“For my own personal highlight reel, to have the fight with Valdez or Santa Cruz – two of those names there – I just know it would be a fantastic fight so I’m disappointed it couldn’t happen.

“But the mind is keeping concentrating on winning. I don’t want to start thinking about what’s going to come after because it might be next fight, it might be two fights, it might be three fights down the line.

“It might be next year, it might be the year after that, I don’t know, it’s not as easy to make out as I first thought. All I’ve got to do is keep winning, winning in style and hopefully patience will prevail.”

Former European champion Takoucht has won 35, lost three and drawn one of his 39 professional outings and is placed fourth in the IBF rankings.

He will be a big underdog but Warrington said: “He’s going to give everything to grasp that belt from me.

“He’s going to go away, train as hard as he’s ever trained before and on October 12 I’m sure he’s going to bring his absolute best to try to win that world title.

“Knowing first-hand what it can do for, not only your career, but financially for your future and your family and everything else, it’s life-changing being a world champion.

“He’s not getting any younger and this opportunity might not come again for him.”

Carl Frampton was due to fight this weekend for the first time since losing to Warrington in December last year but the Northern Irishman was forced to postpone his bout against Emmanuel Dominguez because of a “freak accident”.

According to the former two-weight world champion, a large ornament in a hotel lobby fell on to his left hand, fracturing his fifth metacarpal, leading to Warrington expressing sympathy for his former foe.

Warrington added: “I’m devastated for him. Your career is short and I think he was looking to get this fight done then put himself into a position to fight for a world title again.

“That’s all been delayed so it could be a year before he’s out again from the last fight which was against me. It’s a long time out and to come straight back into the high level as well, it doesn’t do you any favours.

“I’m gutted for the lad but let’s hope that he can get something.”