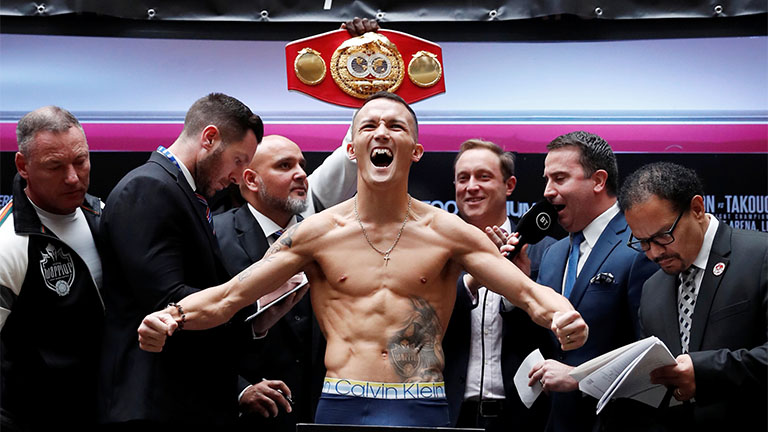 FRANCE’S Sofiane Takoucht got a taste of the ferocious reception that awaits him at Leeds’ First Direct Arena on Saturday when he weighed in for his world title fight with Josh Warrington. After taking to the scales at the Corn Exchange today (October 11), with Warrington’s fans cheering wildly, the IBF featherweight champion locked his eyes on to Takoucht and stayed glaring at him, nose to nose, for so long that a security guard had to insert the palm of his hand in the narrow gap between their eyes to prompt the two to pose for photos.

“We took our eyes off a few things before the last fight against Kid Galahad. We were so concentrated on unification fights and just beating him up. I think we took our eye off the ball in a few areas of training,” Warrington said. “This time, I have not looked beyond Takoucht. There is talk about unifications or going back to Elland Road, but the focus is this fight and this fight only.

“I want an A class performance after the cuddling contest against Galahad. Sofiane can go home a hero by beating me and I can’t let that happen. World champions can get complacent, but we are on a mission.

“My mentality isn’t that this is an instant win. Winning is the most important thing but I want to send a message and win in style.”

The Frenchman declared, “I feel good, I have been training hard, I am in the best condition and will show up on the night. Josh is a very good champion, but I need to make an impact in order to win. Winning will change my life and reputation in the boxing world. I believe in myself. I am ready to fight.”