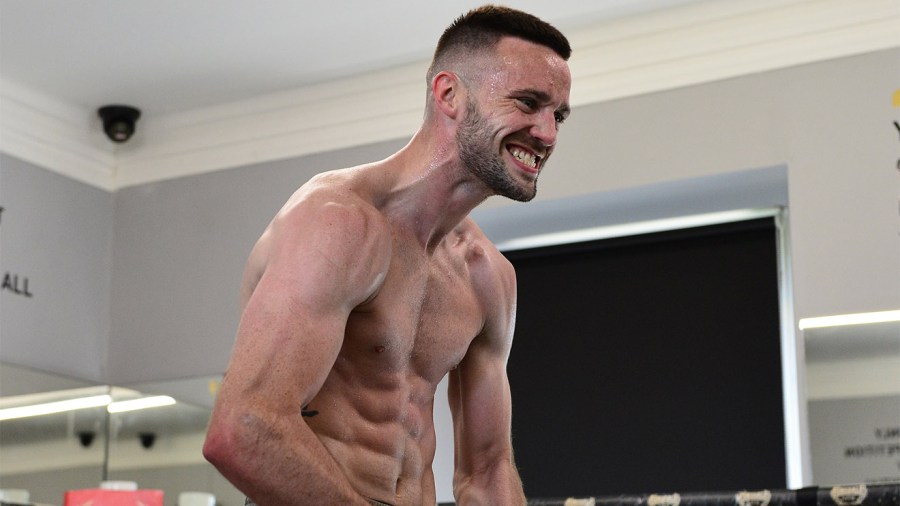 JOSH TAYLOR, the unified WBA and IBF super-lightweight champion, has set his next fight and decided on his new trainer.

Taylor will return to Scotland on May 2 to defend his titles at the Hydro in Glasgow against mandatory challenger Apinun Khongsong. BT Sport will screen in the UK and ESPN+ in the United States.

“I’ve seen a couple of fights of him,” Taylor said of Khongsong. “He’s tall, he’s rangy, he looks like he punches quite hard. He’s pretty wild with his punches and punches quite hard. He’s definitely going to have a little bit of danger and a bit of a threat so I’m going to have to keep on my toes and focus really on this fight at hand, as always because I never really look past anybody. I’ll be treating this like it’s my world title challenge, like when I was going to fight [Ivan] Baranchyk.”

He will have a new trainer in his corner. After a trial period he has linked up with Ben Davison, who takes over as Taylor’s coach. This will be their first together and allow them to form a bond before going on to pursue Taylor’s ambition – to take on Jose Ramirez for the undisputed super-lightweight crown.

“Every trainer’s got their own methods and their own ways of training. You need a little bit of time to adjust and gel with the trainer and his methods, and the way he catches the pads or the way he trains or things like that,” Josh said. “You need a bit of time to gel and get used to each other.”

“You’ve got to connect with the person,” he continued. “So you need a little bit of time. So it wouldn’t have been wise for me to do that and then go straight into the Ramirez fight, I’d like to get a fight with my new coach under my belt first.”

Ramirez will defend his WBC and WBO world titles against Viktor Postol the following week, May 9, in Fresno. Victory would set Ramirez up for a fascinating undisputed clash with Taylor, if the Scot is successful in his fight.

But he adds, “If I make a mistake, for example if I make a mistake or underestimate Khongsong and if it goes wrong, then that’s all my plans done. So I need to focus and keep my feet on the ground and fully focus all my attention to Apinun Khongsong and make sure I win that fight before I go for the Ramirez fight and then focus on him. Then you’re up to 147lbs and the big fights up there. So I need to keep myself tunnel vision focused.”

Charting a course to these major bouts is why Taylor joined new promoter Top Rank. “They’ve got all the big names and the big draws. So I just feel it was best move for me at this time in my career. I’m happy with the decision that I made and looking forward to seeing what the future holds,” Josh said. “I just think they’ve got the biggest platform; ESPN. When you go to America ESPN’s the biggest channel. It’s got the biggest platform, the biggest audience. I just thought it was a no brainer. I can still fight in the UK, I’m not tied down to just fighting in America. I can still fight in the UK and also I’ve got the backing of Top Rank to get the big fights made in America as well. I think I’ve got the best of both worlds. I think I’ve done the best deal for myself as possible.”

Becoming undisputed would open up a wealth of options for Taylor, whether it be further defences or moving up to welterweight maybe for a lucrative bout with someone like Amir Khan or more appealing, one of the toughest challenges in the sport against Top Rank promoted Terence Crawford.

“Maybe a big fight at 140lbs again or you vacate and move up and go up to 147 and chase the big fights there, chase the massive fights up there. I’m looking forward to it, looking forward to what happens. I’ve got the short term goal. The short term goal is to beat Khongsong, beat him, do a job, take care of business and then it’s to fight Ramirez and beat him as well,” he said.

“The potential for fights from here on in now, it’s mental, it’s crazy, fights that potentially I could be involved in in the next couple of years. It could be amazing. So I’ve just got to keep my feet on the ground, keep working hard, keep focused… That’s the most important thing, keeping focused and focusing on one fight at a time.”