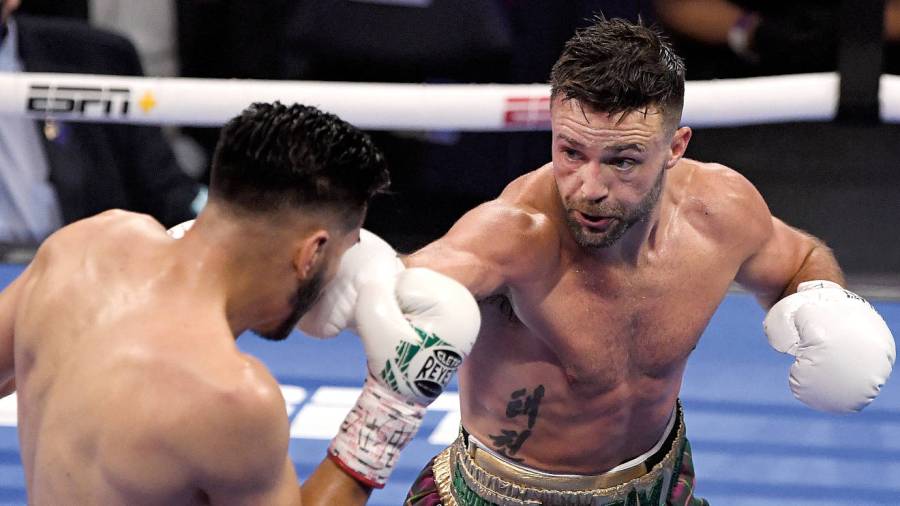 If Gervonta Davis wants to win a title at 140lbs, he’s got to fight me not Mario Barrios. I’m the one with the titles, says undisputed champ Josh Taylor in his own words

I WANT to do more. I want to go up in weight, I want to become a second weight world champion and really cement my name in the history books as one of the best ever to do it coming from Britain. I’ve got that desire now. I’ve said for years and years I’m the best and now it’s proven true.
I still feel like I can go further and further and achieve more. I don’t feel like I’ve hit the ceiling of my potential yet. That’s why I’ve got the burning desire to keep doing more.

I could keep all the belts at super-lightweight. All the mandatories that are coming up I feel I’ve got absolutely no problem against everyone of them with beating them and beating them well. Jeremias Ponce, a good solid fighter, comes forward but he’ll walk into shots, he’ll get knocked out. I believe I beat Jack Catterall. I like Jack Catterall, he’s a good fighter but I believe I beat him no problems either.

We’ll see how it goes, we’ll see what happens. A nice big homecoming fight, then get on the road again.

But I don’t need to prove anymore I’m the best at 140lbs. Doing all that, all these mandatories, stops me from getting the real big fights that want. So I think I’ll do my next one, against Jack Catterall probably, and step up and go for a second weight world title. I could vacate my belts now and go up and do it. I don’t have to prove that I’m the best.

Touting this Gervonta Davis-Mario Barrios fight as a world title fight, how can it be a world title fight when I’ve got the four world titles? That’s what I think is really wrong with the sport. There’s too many belts and too many champions. It dilutes the sport and makes it hard for people to follow who’s who and who’s the best because there’s so many.

If Teofimo Lopez wants to come up and fight me, I think he’s a great fighter but he’s too small for 140lbs. I’m at the bigger end of 140lbs, he’s a big lightweight, I’m a big 140-pounder. I’d bash him up. He’d get a bit fiery in a fight week and I get fiery in fight week, so it would be good. But I really do believe that I beat him up.

I think Terence Crawford is the best of the bunch. I think he’s a great fighter. I think he’s top three pound-for-pound. He was the last guy to do it at my weight, to be undisputed at 140lbs. So I think it’s got the makings of a great fight. He seems to be struggling to get a fight at the minute. So I’ll take that any day of the week.

I would fight Crawford tomorrow. He’s a great champion, so clever and smart the way he boxes but he’s also got that punching power and spite as well. He’s got it all. He’s a great fighter and that’s why I’m in the game – to fight the best. I think he’s the best so I want to fight him and test myself against him. I think I can win, 100 per cent. I keep proving everybody wrong and I’ll prove everybody wrong again.

Manny Pacquiao is a possibility. He’s my hero. I almost don’t want to fight him because I don’t want to share the ring with my hero. What if he beats me up, still at 40 years old? He looks like he’s rewound a few years. He’s amazing. I’d love to fight him. I’d love to share the ring with my hero. It would be brilliant. I definitely would retire after that one. That’s me done. Fought my hero, beat my hero, won all the belts, game over, well done. That’s enough for me.