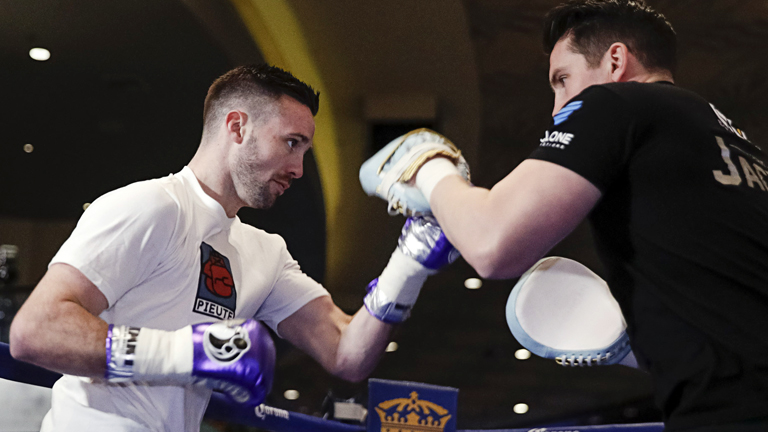 Josh Taylor has huge respect for Ricky Burns, and would love a chance to fight him - at the right time

SUPER-LIGHTWEIGHT prospect Josh Taylor is excited about the idea of an all-Scottish meeting with WBA champion Ricky Burns – but is not getting ahead of himself.

The unbeaten Commonwealth champion boxes on the Carl Frampton-Leo Santa Cruz bill in Las Vegas this weekend, and hopes to keep progressing this year.

Given his stellar amateur background and 100 per cent knockout ratio in the pro game so far, the 26-year-old has been tipped for big things and he hopes to get himself in the mix soon.

“Obviously, get through this on Saturday, I can’t look past this opponent. I’d like a couple more defences of my Commonwealth title, get some more development, get more rounds in and then maybe even be knocking on the door for domestic titles, I’d love to fight for the British title and then maybe the European. Knocking at the door at fringe world title level,” he told Boxing News.

“Domestically it’s starting to heat up. Tyrone Nurse is British champion and there’s four or five of us nipping at his heels and wanting a shot at the title, there are loads of good fighters out there, Robbie Davies Jnr, Ohara Davies, Jack Catterall is a good fighter as well. Obviously Ricky Burns as well, that’s a fight I’d love as well, an all Scottish showdown, later this year. I just need to take one step at a time and keep winning, keep progressing.”

Though he is still green in the paid code, Taylor boxed all over the world as an amateur, operating at the highest level. He would back himself against Burns already, though insists he is not demanding a fight with Ricky – he knows he must prove himself worthy of a world title shot.

“But if I got picked to fight him tomorrow, I’d be confident in my ability to beat him. I massively look up to Ricky Burns, I’ve never called him out. He’s a great fighter, he’s put Scotland back on the map for boxing, he’s bringing big shows up there but at the same time if I get drawn up against him, I’m confident I’d beat him.

“I don’t like calling people out though, but if the timing’s right, the situation’s right I’ll fight anybody – ask any fighter and they’ll tell you the same thing. I genuinely would fight anybody and I won’t call people out, but I’m wanting these fights.”