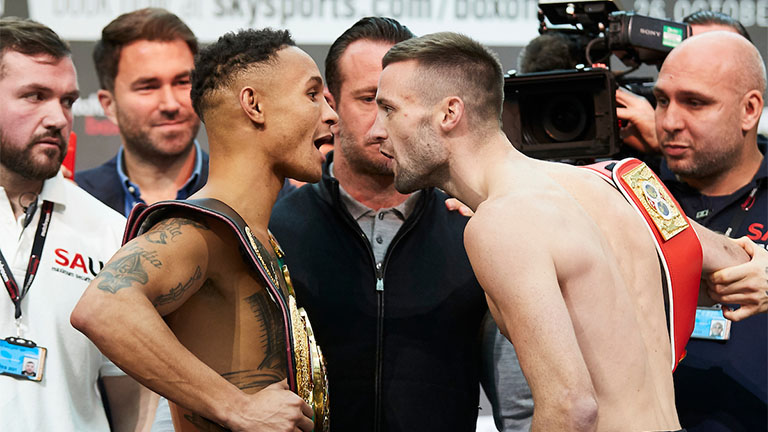 But Regis Prograis claims Josh Taylor unification 'is not a 50-50 fight. I feel I’m too superior. I’m going to blow him out'

IT’S hard to resist looking beyond the Josh Taylor vs Regis Prograis super-lightweight battle. It is a tremendous fight in its own right and will unify the WBA and IBF world titles. The winner then would only need to fight Jose Ramirez, the WBC and WBO champion, to set up a fight for the undisputed crown.

“That’s the next goal. After Saturday I want to chase the Ramirez fight and win all the belts outright and really call myself number one, the best in the division. That is a goal of mine,” Taylor admits. “I think Regis is probably better. He’s got more variety about him, moves his head a bit more, moves angles a bit better. He’s got a wee bit more to his game I think. Ramirez is more straightforward but punches hard and good timing and aggressive as well. They’re both good fighters.”

“That’s what drives me,” he says. “I’m just super-competitive.”

Prograis can’t deny a lucrative future is in store for the victor of this bout. “All these things on the table and there’s a shitload of money out there. Right now I just want to focus on Josh Taylor. I focus on Saturday night, you never want get too far ahead of yourself. I want to only focus on Saturday night, then after that then we’ll discuss other possibilities,” the American noted.

He sounded a warning to the home fighter. “You never know how it’s going to pan out until it happens. It’s definitely supposed to be my hardest fight,” Prograis said.

“The thing about me it’s always been 50-50 fights and I’ve been blowing them out. When I fought Joel Diaz Junior it was a 50-50 fight. It went two rounds. Same thing with [Julius] Indongo, 50-50. I knew what was going to happen. I knocked him out in the second round. It’s always like that with me. A ‘50-50’ fight then I just dismantle them. So I feel like it’s going to be the same thing with him. I do not feel like this is a 50-50 fight. I feel like I’m just too superior. I’m going to blow him out.”