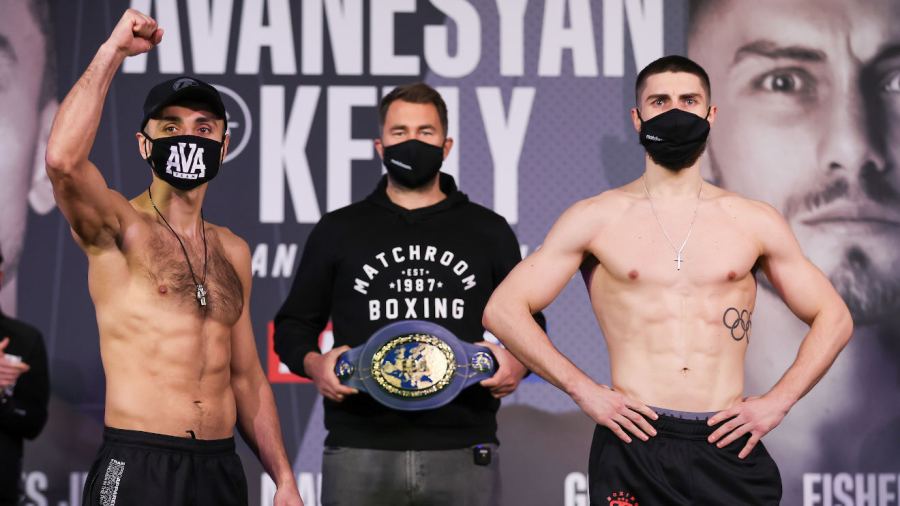 440 days after Josh Kelly and David Avanesyan were first due to collide, the two are finally ready to fight. Roy Kelly (no relation) reports from the Wembley bubble

THE weigh-in was not without its hitches. Issues regarding the scales had to be resolved just before the ceremony without the need for Eddie Hearn to dig into his wallet for the Matchroom credit card and hastily order new ones from Tesco. Challenger Josh Kelly was up first, weighing in at 146lbs with the European champion David Avanesyan tipping the scales at 146lb 4oz.

The Sunderland boxer, always a good mover, bopped about on stage a little before the obligatory head to head picture.

Kelly gave it “and the new” with the laidback Avanesyan leaving it to his coach, Carl Greaves, to respond with “and still”.

It was all good natured stuff and 440 days after these two boxers were first due to collide in Sheffield battle will finally be joined when referee, Victor Loughlin, instructs “box” some time after 10pm on Saturday (February 20).

Having started his 2021 schedule in such spectacular fashion the previous weekend, Hearn’s excitement scale has risen another notch.

“I don’t think I’ve ever seen two teams quite as confident before a fight about their man winning,” said the promoter. “I think we have one of the cards, and one of the main events in particular, that I haven’t looked forward to like this for a long, long time.

“With all due respect to our friends in the EBU, this [title fight] is much, much, much bigger than that, given the history, the narrative and the world rankings in the welterweight division.”

And there lies the crux of this particular argument. It’s more than just about the EBU’s belt. Avanesyan’s name is in the top 10 of every sanctioning body, while Kelly squeezes in at 15 with the International Boxing Federation. The Russian expects a world title shot next, should he be successful, while the Sunderland star would move into a wonderful position after just 12 contests. It is, as they say, all to play for.

And underneath the headline act, there is plenty to occupy our attention, Hearn adding how he is “so pleased to be keeping the sport going, keeping the momentum going.”

Another welterweight bout acts as chief support as the unbeaten pair, Florian Marku (146lbs 8oz) and Rylan Charlton (144lbs 6oz) both prepare to step up to 10 rounds for the first time. London-based Albanian Marku looked ultra confident, closing the two-metre gap for his head-to-head with Norwich’s pint-sized powerhouse.

There are two England v Mexico matches over 10 rounds.

Watch out too for the return of Robbie Davies Jnr, who did get to box in 2020, but quite early in the year. The Liverpool super-lightweight (138lbs 2oz), now under the guidance of Dominic Ingle since his Battle of Britain classic with Lewis Ritson, faces Gabriel Valenzuala  (138lbs 8oz).

That brings us to the heavies for fifth and final contest on the card as Romford’s Johnny Fisher, fresh from a university degree and some gym education when sparring Joe Joyce among others, steps into the professional ring for the first time. Fisher (237lbs 10oz) is up against West Bromwich’s Matt Gordon (241lbs 10oz).

There we go, the wait IS over. There will be no last-minute problems, will there?