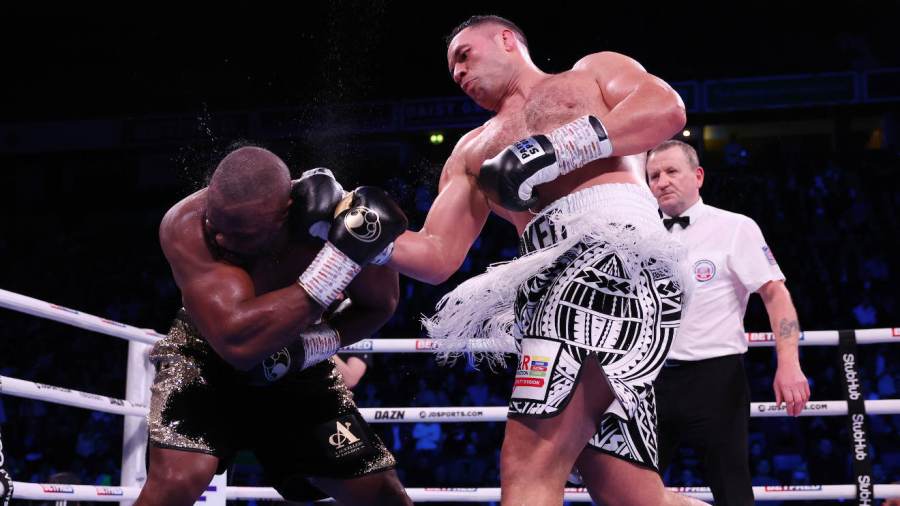 IN a battle of unsparing violence Joseph Parker overcame Dereck Chisora in their rematch at the Manchester Arena on Saturday (December 18).

Parker opened the bout on the front foot as Chisora uncharacteristically stood off. But soon enough, true to form, Chisora advanced. Parker though slung his right in as he backed off, catching the popular London heavyweight. It was a good start for the New Zealander.

Chisora dashed a right hook off Parker’s head as he bulled him onto the ropes in the second round. The Londoner launched another right over the top but Parker smashed a left hook back into him. It looked like Chisora was prepared to walk through those shots until the third round. In that session Parker hurt Chisora with a right uppercut. Chisora leant back into ropes as Parker set about him.

In the fourth round Parker picked out body shots. But it was that right uppercut that did the damage again. That shot struck and saw Chisora fall into the ropes, getting a count from referee Howard Foster. Dereck covered up in a corner. Parker waited a moment before he launched himself in with a left hook. Just when he looked hurt however Chisora retaliated. He burst out of the corner with heavy hooks, striking Parker.

Chisora managed to put pressure on him in the sixth round, his left hook connecting. Parker began to tire, becoming more ragged and more willing to hold.

The New Zealander broke through again in the seventh round. He threw a straight one-two, to set up another right uppercut. That stunned Chisora, he dropped forward on to his hands and knees. Chisora was vulnerable. Yet still he denied Parker the opportunity to finish him. He bombed forward out of a corner, firing hooks, and he slammed massive shots into Parker’s chin.

In the eighth Chisora was still grinding forward. Parker held as he tried to get his breath back before bringing in the shot that had been so effective for him. The right uppercut blasted through, leaving a stunned Chisora to fall into the ropes. Nevertheless he persisted.

Chisora made it hard for Parker. Both men tired and Parker left his chin open for clubbing shots. But it was Chisora who was taking severe punishment throughout.

They tussled on the inside in the 12th round before Parker started to bring in the bigger shots. Chisora sank in punches to the body but Parker lunged back again, firing at the head.

It was remarkable that Chisora reached the final bell in this fight. Throughout it he absorbed all too many brutal hits. Chisora is 37 years old and at the end of a long punishing career.