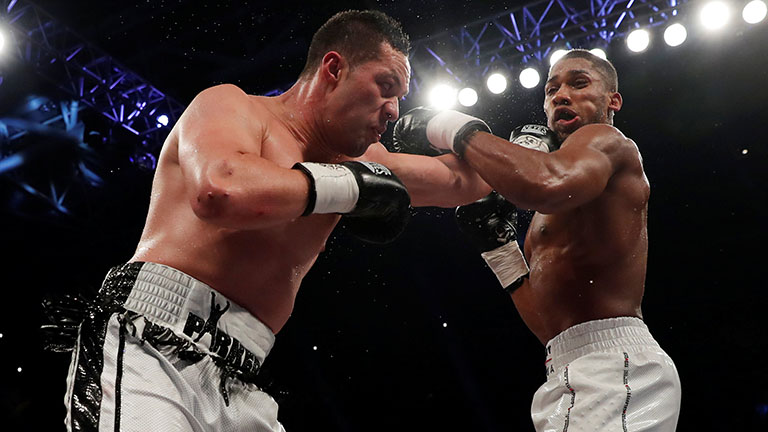 Anthony Joshua has changed Joseph Parker. In an exclusive interview he speaks to John Dennen

FIGHTING Anthony Joshua has changed Joseph Parker. The New Zealander lost his WBO title to the unified heavyweight champion earlier this year. But Parker is not prepared to slink away from the top table. With a new determination lit inside him, he has seen what it takes to stay at the elite level and adjusted how he trains and prepares accordingly.

He has come into training camp significantly lighter. He tells Boxing News, “We did the most rounds of sparring we’ve ever done, in about five or six years together. Kevin [Barry] adjusted the training schedule to suit us better, changed it from the last fight and we’ve found it worked tremendously well… It felt like everything was clicking well.

He is certain that the ‘new look’ Joseph Parker can get back to the highest level of the heavyweight division. “I’m still young. I fought one of the best in the world. He changed his game plan. I was surprised with how well he boxed,” Parker said. He had expected Joshua to come steaming forward and look to clear him out. But instead Joshua used his jab to marshal him across the ring and control the action.

He does take some satisfaction at becoming the first professional opponent to go the distance with Anthony Joshua. “It was good performance but I know there’s another level I can get to. I lost to a better man on the day. I hope in the future to get another chance to fight him. He brought out the best in me and I’m sure I brought out different things in him. When you fight good challenges it’s always exciting,” Parker said.

To last the course in Cardiff, it was imperative that Parker avoid Joshua’s dangerous right cross. “I think it was the movement, little movement,” the New Zealander explained. “He did catch me with a few left hooks and jabs but nothing really major that was a big one that shocked me. I didn’t feel [the power] maybe because of the moving. Maybe if I’d stood there I would have been like every other fight he knocked out and felt a big right hand. I’d roll with the punches or he didn’t catch me, so I think that was a good thing I did.”

But he struggled to gain much traction offensively. “I think I may have hurt him to the body but as a fighter you never show it. I think there’s a few punches that he threw that I felt – ‘that was nice’ but you never give it away, [you pretend] ‘is that all you have?’”

Parker was not overawed. “He can be intimidating. His presence. The way he conducts himself. Same with Klitschko, he was dominating for 10 years,” Joseph said.

He also coped with the scale of the occasion at the Principality stadium. “For Joshua it’s become second nature. He’s got such a following, he’s taking care of all his opponents, it’s normal for him now. He’s fought in front of 80,000, 70,000, 30,000. It’s second nature. For us, I don’t think there are a lot of boxers who can say they’ve fought in front of 70 or 80,000 people. So it’s something special for me but for him it’s become normal,” Parker said.

The referee Giuseppe Quartarone did not handle the occasion so well. He constantly interrupted the action, breaking the fighters and stopping them from working on the inside. “In the fight I don’t really pay attention to the ref. I just don’t want to get in trouble or disqualified, I don’t know. I didn’t really pick it up until after the fight. The ref did what he had to do. As a fighter I could have adjusted and changed but it’s all learning,” he said.

Parker’s first task is Dillian Whyte, whom he’ll box on July 28 at the O2 in London. “I’m sure this time the ref won’t be involved as much, I’m sure when Dillian and I get in close, we’ll want to throw our hands. I’m expecting him to throw bombs, punches in bunches,” Parker said. “He’s highly ranked in every sanctioning body and he’s done tremendously well for himself.

This is the fight he believes will take him back to the top. “I’ll fight [Deontay] Wilder, I’ll fight Joshua,” he said. “If I had a rematch with Joshua it would be totally different… He might think he can knock me out, I think I can do way better.

“First I have get past Dillian. He’s a big, hard task in front of me. My full focus is him. He’s got a target on his head.”