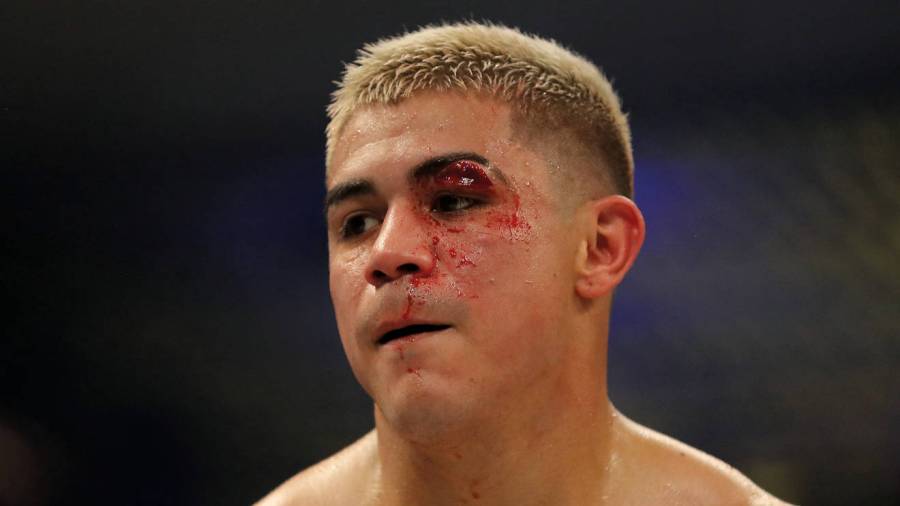 Diaz (31-1) is targeting Gervonta Davis, a big fight for the Californian southpaw after Davis announced himself as a pay-per-view fighter with that exclamation-mark knockout of Leo Santa Cruz last year. Diaz would have hoped that at 28 years old, he would be where Davis finds himself now.
Oscar de la Hoya called the 2012 Olympian “the whole package” early in his pro career, but in his first world title challenge, Diaz lost to Gary Russell Jnr for the WBC featherweight belt and then weighed in heavy ahead of his clash with Jesus M. Rojas.

After stepping up to 130lbs, Diaz got three wins and challenged for Tevin Farmer’s IBF crown last January, a fight he was expected to lose. From the second, Diaz fought with a ghastly gash under his left eyebrow, while Philadelphia portsider Farmer (30-4-1) hurt his right hand in the opening round and Diaz went on to outwork him to win by scores of 115-113 (twice) and 116-112.

Diaz was able to make Farmer engage at short and mid-range and outpunch him. Farmer had his moments – especially when he found some room – but throughout, Diaz had the last word. To Farmer’s fury, the contracted rematch has yet to happen and the IBF have insisted Rakhimov gets his shot.

The 26-year-old southpaw has won all 15 fights – 12 early – and the best name on his record is Mexico’s Robinson Castellanos (24-13), who was 36 years old when Rakhimov walked through him.

Rakhimov gets his chance after ironing out South African lefty Azinga Fuzile (14-0) in an IBF eliminator in September 2019. The eighth-round ending was unexpected. Behind on points, Rakhimov didn’t have too much to show for his constant aggression until he beat Fuzile to the punch with a southpaw backhand. The shot left Fuzile on his back. He dragged himself up, tried to fight Rakhimov off and ended up stunned by a crashing left and then left flat on his face by another.

The South Africans complained that Rakhimov was revived in his corner by smelling salts, but following an enquiry, his team were cleared of any wrongdoing. Rakhimov has since joined Roach. He looks a handful.

At 5ft 8 1/2ins, he’s more than two inches taller than Diaz and full of fight. Against Fuzile, Rakhimov only once took a backward step, after being hurt by a fourth-round body shot, and when he shipped a low blow in the next, the Russian responded with a headbutt moments later. At the end of most rounds, Rakhimov would glare at Fuzile or talk to him. He is hungry and he can punch.

Diaz’s chin passed a test against Jayson Velez in what was his breakthrough win. He’s also beaten Andrew Cancio and was competitive in the unanimous points loss to Russell. Russell pulled away in the second half after feeling Diaz’s body punches early on. If there’s a weakness to Rakhimov’s body, Diaz is sure to find out.

Combination puncher Diaz is comfortable on the back foot, but against Farmer, he closed the gap and let his hands go. Those are usually Rakhimov’s tactics. The challenger has the edge in size and power, but there’s greater quality about Diaz’s work and he’s more versatile. With this in mind, we go for Diaz to win an exciting fight on points.

Viewers on DAZN should also be entertained by Teixeira’s first defence of the WBO 154lb strap. The question will be whether the champion can use height and reach advantages of four and nine inches respectively to keep off the strong Argentine.

Teixeira, 30, won the Interim belt with an upset verdict over the heavy-handed Carlos Adames (18-0) in November 2019, and was upgraded after Jaime Munguia moved up. He’s won all six since dropping down to 154lbs after big hitter Curtis Stevens beat him inside two rounds around five years ago – the sole blemish on his 31-1 record.

Castano, 31, whose draw with 35-year-old Cuban southpaw Erislandy Lara (25-3-2) is the best performance on either his or Teixeira’s record, is fancied by the bookmakers. Yet Teixeira looks hard to beat. He is long and twitchy and though he gets caught, he showed a lot of heart and great conditioning against Adames.

By the midway stage, Teixeira’s face was a mess. Blood leaked from cuts on his right cheek and over his left eye. Adames was landing cleanly and must have thought the end was near. Adames was all over Teixeira in the seventh – and was then dropped in the dying seconds. That turned the fight Teixeira’s way. He finished stronger and the knockdown won him the fight on two of the cards.

There are times when Teixeira looks complacent and Castano will be hoping he can hurt him and get on top of him. It’s close and we go for Castano on the scorecards.

The Verdict Tough-looking defences for the two champions.