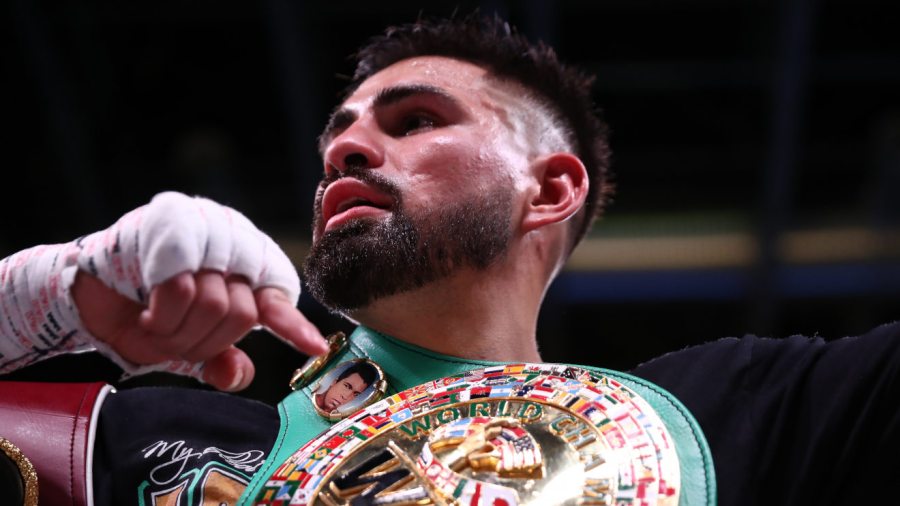 HE still remembers the feeling. One hand being raised, the other clutching a huge trophy. Hundreds of faces all around him, all looking at him, all applauding him. He had won his first bout and felt like a champion.

“I fought a kid who was a year older and had two amateur fights. I tell you the trophy that I got from that first fight, I was 60lbs and the trophy was half my size. So I was so excited that the sport gave me something so big. I never experienced having a trophy that big and the feeling, they were calling me champ. I felt a lot of glory being in the centre of the ring I was just an eight-year-old kid,” Jose Ramirez, now the WBC and WBO 140lbs titlist, remembered. “I was so excited with that trophy I didn’t want to let go of it. I just wanted to collect more trophies and I wanted to learn more about the sport.”

Ramirez’s parents had migrated to the United States in 1980s to work in the fields in central California. This first contest took place in Fresno, the biggest city in the region. “I was raised in a small town of 10,000 people, no one had more than the other. I had very humble beginnings. There was no jealousy, all we had was our friends, working giving us a lot of support to make sure we were good students,” Jose said.

A boxing gym only opened there in 1999. “It was like the new thing to do in our community. So many kids were excited. My dad signed me up and he tells me: ‘I signed you up, I want to do something that’s all year long, not just seasonal, you have way too much energy. We’re having a lot of trouble with you at the house.’ I was a great student. I was a very respectful person. In my class I really respected my teachers. But when I got home, it was home, I changed. I’d be like a little dirt devil, I’d be on top of the roof jumping down to the ground. I was trying to do impossible things so my dad was like you know what, Jose has too much energy, we want to make sure he gets into a sport that’s all year long,” Ramirez said.

Winning that first contest inspired a lifelong passion for boxing. “No one in my family ever boxed, so they were not nervous. I wasn’t nervous either to be quite honest. I didn’t know what to expect. It was something new. I started getting nervous before fights later on when I started realising, ‘my gosh I’ll be too embarrassed to lose.’ So I started getting that little pressure. But at the beginning it was a beautiful thing. A lot of excitement every time I fought, my family was always there at all my fights supporting and every time I would get out as the winner my dad was really happy and so was my mother so I wanted to make sure I gave them more of those experiences,” he explained. “I could already see that the sport was going to give me something different and more than other sports at the time. And sure, the sport of boxing has really given me a better life for me and my family but also has given me a voice to do a lot of great things and to be a part of a lot of great things.”

He became an Olympian, won the WBC and WBO championships and now faces Josh Taylor, who holds the other two major titles, on May 22 in Las Vegas for the chance to become the world champion. Ramirez said, “I’m just glad I’m here, facing a great champion for all the belts. You couldn’t ask for a better match up in the 140lb division for an undisputed world championship bout. Two Olympians, both undefeated, both chased two belts, both two different pathways but they meet at the same time. This you could say is the final match up of the overall tournament in the junior-welterweight division. He faced two [sanctioning body] world champions in the [World Boxing Super Series] tournament. I fought Amir Iman for the [WBC] world title then I fought an undefeated Maurice Hooker for his [WBO] world title. You got the best facing the best.“
His respect for Josh Taylor is clear. “He’s a great champion. He’s done very well for himself. He’s one of the best in the division, that’s why we’re here in this fight. He’s an Olympian, he’s in his prime, he seems to be very confident. He’s a very proud guy too as far as his heritage and his country. That motivates me even more. Because now I understand I don’t want to face no one lesser than that calibre. I want to face a guy like him. That’s who I want to beat. I want to become undisputed facing the best. I’m not expecting any less than what I see. That motivates me to go into that gym and push myself. That’s what motivates me to do what I do. I’m expecting a great champion. I’m very composed and I’m very motivated. Like I said I’m very inspired, I’m very calm and the fans should really enjoy this fight,” he said.

He refuses to think much beyond the day of the fight. “I just can’t. I’ve just got to take it one day at a time,” he said. “I need to focus right now. Make sure I improve. Every day is going to make me a better fighter.

“I don’t know what my life is after every fight. I can never see the day after the fight. From my first professional fight, when I was getting ready for a fight, if the fight’s on Saturday I can’t imagine there being a Sunday. My life from here to the day of the fight, that’s it. I can sense the emotions from the people, from the fans all over the world, from the sports writers, I can sense the excitement so I know something really, really big could happen if I am victorious May 22.”

To become the undisputed champion would be the ultimate achievement for him. It’s remarkable to think, given Mexico’s tremendous success in the sport, he would become the first boxer of Mexican descent to unify all four major titles in the four belt era.

“It would definitely mean a lot. It would just be an honour for me to be the first Mexican descendent to have all four titles in boxing, it would bring a lot of glory to my family, to my community, to the people who support me the most. It would be a beautiful thing. I can almost taste it but then I have to jump back to reality, it’s too early to celebrate, I’ve got to work,” he said.

For Ramirez part of being a champion is using his position. He campaigns for migrants, for water rights for agricultural workers in California and more. “Being a champion gave me a voice but also using my platform to talk about positive issues that will do good for the communities such as fighting for water rights and making sure our people in those communities, we live in an agricultural industry area, those are the jobs that feed a lot of us and those are the jobs that feed a lot of people all over the world. We just want to make sure we have that water storage, that back up, just in case one year it doesn’t rain, to make sure we have that back up for the people to continue having their jobs and continue feeding their families. So I’m always going to help people for water storage and also for legal immigration for those that deserve it, for those that have been here in the United States for many years, those that have contributed, paid their taxes, been good citizens and they have made America their home. So I’ve always been a big advocate for that movement, to make sure they continue to do what they do without having that fear factor of being deported. Because they’re great citizens to the United States,” he said. “My mother got her status in 2017 so she went many, many years with that fear factor of being deported. So I understand the people that are here in the United States, who are good citizens, who work really, really hard, they don’t complain. They want to contribute to the community but more than anything they just want a safe home and they want to give their families a better life.”

Going into this bout, Ramirez is highly driven. But Josh Taylor will be the hardest bout of his life. “It’s God, family then it’s the sport of boxing in that order. I couldn’t have done this without my family, but what drives my family to support me, what drives me to push myself has always been our faith. Drive through our faith. That’s the biggest weapon that God gave us. I’ll try to use it more often,” he said.

“I have a lot of faith in myself. Those who know me closely know I have a great heart. I think it’ll be very hard for someone to beat me. It’ll be very, very hard for someone to beat me. I’m not saying it’s not possible, but it’s going to be very, very hard. I’m always so focused on what I’m going to bring to the table, rather than what my opponent brings to the table. I know who I’m fighting for, I’m very inspired right now. I have my own family now. I have my five-year-old son and a newborn baby,” he continued. “She came out very healthy, beautiful baby girl. Again I’m very motivated. And I think the embarrassment of losing still hasn’t left me. It really helps, it really makes me dig in. I don’t want my son to see that there was another man that beat his father. I never saw no man beat my father. So I want to show my son the same thing.”

From an amateur trophy to fighting for all four of the belts, speaking out for his community along the way, Ramirez is becoming his own kind of champion.