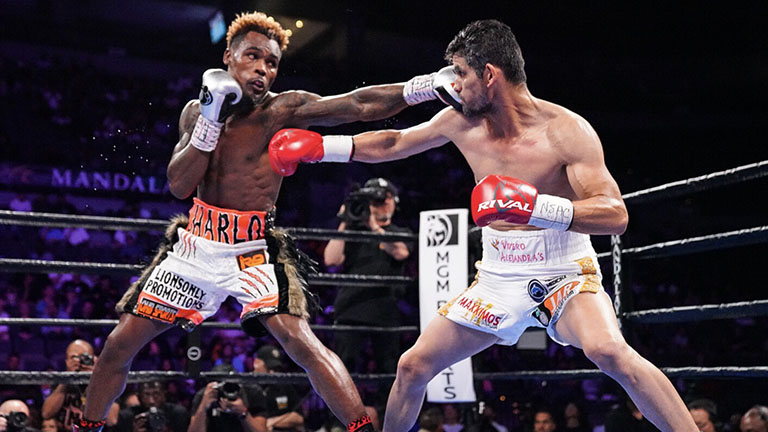 BATTLING suspicions that he had lost his edge, super-welterweight contender Jermell Charlo, from Houston, Texas, shot back at sceptics with a vicious third-round knockout of Mexican fall guy Jorge Cota at the Mandalay Bay Events Center.

Indeed, there is nothing quite like a viral-worthy KO over a no-hoper to get the feelgood vibes flowing again. Of course, it wasn’t supposed to be this way.

Originally, Charlo was slated to face WBC super-welterweight champion Tony Harrison, who snatched the title from him last December via a controversial points decision. But the rematch was waylaid after the Detroit-based Harrison suffered an ankle injury during training camp, forcing him to pull out of the fight.

But as with most stateside cards these days, with fights tied more and more to the programming agenda of a particular network, the TGB-promoted show had to go on. Enter Cota, who had all but three weeks to prepare and moreover, was already a known quantity of sorts; two years ago, he had been starched by 154-pound contender Erickson Lubin.

Cota fought competently for as long as he could, landing a few slapping combinations in the first two rounds. Charlo got the opening he wanted in the third. During an exchange, Charlo ducked and countered with a short hard right that sent Cota to the canvas.

Cota got up on wobbly legs and held onto the rope for support, as referee Jay Nady, neglecting to ask the Mexican to walk toward him, sent him back into the line of fire. Sniffing blood, Charlo promptly connected on a text-book one-two combination that immediately felled Cota. Nady came over to wave off the fight at 2-14 of the third, as Cota gaped at the rafters above him with star-struck eyes.

Looking ahead to the Harrison rematch scheduled for the autumn, Charlo barked, “I’m a much better fighter than [Harrison]. Like I said, he’s lucky he didn’t accept this fight with me this time.”

An unexpected super-bantamweight slugfest between the Mexican Julio Ceja and the irascible, talented, and perennially frustrating Cuban southpaw Guillermo Rigondeaux ended on a sour note.

Had Father Time finally caught up to the 38-year-old Rigondeaux? That appeared the case from the get-go, when Rigondeaux, perhaps the most faithful devotee of the Cuban School of Boxing, opted to trade with Ceja in the so-called phone booth, instead of sauntering around the ring looking for the counter, as is his wont.

It was a puzzling sight and ill-advised considering his strengths relied upon a certain degree of finesse. Not that anyone was complaining.

Ceja pressed the action early on, however, outworking a fighter seemingly more mythologised than unicorns. Ceja even stunned Rigondeaux briefly midway through the second round with a left hook.

The pace seemed to favour Ceja, who plowed forward and would throw, at times, as many as five-to-eight unanswered punches. Rigondeaux, a natural counterpuncher, battled back with the occasional eye-catching uppercut and straight lefts, but he was losing the fight.

Then in the eighth round, after referee Russell Mora had docked a point from each fighter for low blows, Rigondeaux floored Ceja with a blistering overhand left that was delivered smack dab on the chin. And this is where referee Mora, who is regularly cited as one of the worst officiators in the sport, made the foolhardy decision to wave off the fight at 2-59 (that is, with one second left before the beginning of the break), even though Ceja, whom all three judges had ahead on their scorecards, looked ready to continue.

Union City, California’s Joey Spencer may have added another win to his nascent record, but he goes back home with plenty of question marks to address after his opponent Milwaukee, Wisconsin’s Akeem Black roughed him up in the second half of their fight (set for six).

The judges — Max DeLuca, Lisa Giampa, Richard Ocasio — were generous, to say the least, with all three turning in scorecards of 59-55 in favour of Spencer, who was completely gassed by the fifth round.

The Verdict Charlo’s back in business but time may be running out for Rigondeaux.