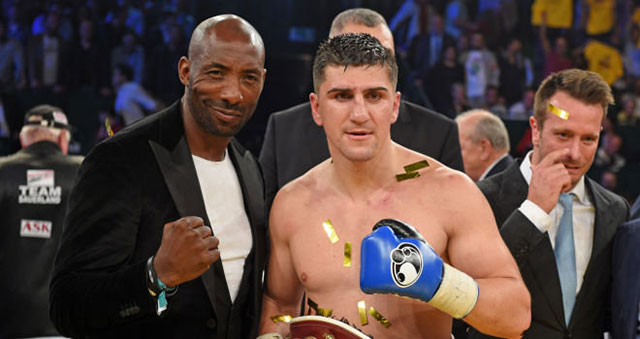 SKY presenter, Johnny Nelson, has confirmed his aspiration to return to the ring in a one off bout with world champion Marco Huck.

It’s been nine years since the Sheffield man last laced up a pair of gloves in anger. In 2005, he was on the crest of a wave, setting the record for consecutive defences of the WBO cruiserweight crown. But perpetual injuries forced the proud Yorkshire-man into a premature retirement. The WBO title, which he safeguarded from 13 challengers, was unduly relinquished.

Fast forward to 2014 and Nelson’s notable record is firmly in the crosshairs of current WBO champion, Marco Huck. The Serbian who seldom fights outside his adopted Germany equalled Nelson’s defence tally with an uninspiring unanimous decision over Mirko Larghetti on Saturday.

Nelson was invited by Sauerland Promotions as guest of honour to publically celebrate and signify a changing of the guard. The Sheffield man was, however, unimpressed with the nights boxing.

He explained, “Look at the level of his opponents; he’s never fought outside Germany. He’s never boxed anyone like me. I am a former champion that’s not boxed in nine and a half years, but after six months of preparation, I believe I could do it because he’s so predictable.”

That evening in Halle, Germany, a fire stoked within Nelson. He contacted his confidants within the game and consulted medical advice about a possible return.

Nelson said, “I spoke to trainers, I spoke to the surgeon who did my hip, and they said if you do it right, over six months, a return to the ring would be possible. They suggested a warm up fight but I said no. I’m not coming back for a career; I said I’d train for six months, just for this one fight.”

The Ringside presenter also pointed to his forced retirement as a factor in a potential comeback. “Maybe it’s closure as well. I didn’t choose to give up boxing,” added Nelson.

The ex champion’s motivations for an isolated return are clear. To expose a fighter he believes is not fit to carry his former strap, to seek closure on a career that was ended by injury and to create an unprecedented spectacle in the cruiserweight division.

“Can you imagine in his 14th defence he’s fighting the guy that set the record? It’s a brilliant story,” Nelson concluded.