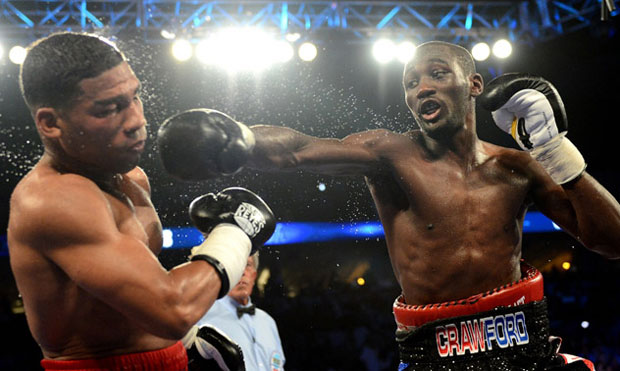 But he’ll need to show charisma too, the trainer tells Danny Winterbottom

WHEN unbeaten American Terrence Crawford travelled across the Atlantic Ocean from his home in Omaha, Nebraska, USA, to challenge Ricky Burns in Glasgow for the WBO lightweight championship of the world in March he arrived as a relative unknown but departed as a champion following a 12-round thrashing of the popular Scot.

Now, just three months on from his coronation in Glasgow, the 26-year-old stands on the threshold of boxing superstardom following his sensational ninth round stoppage victory over Cuban standout Yuriorkis Gamboa in front of a home crowd in the maiden defence of his world title.

Crawford, 24-0 (17), insisted that his first defence would take place in Omaha, his home town and the largest city in the state of Nebraska, and 10,000 fans packed into the Century Link Centre to witness him erase his 2006 National Golden Gloves defeat in the city as he dropped the previously unbeaten former amateur star from Cuba four times in a thrilling, highly skilled encounter.

Gamboa, competing in only his third fight beyond the featherweight limit, showed the quickness and fluidity in the opening sessions that had guided him to an Olympic Gold medal in 2004 but Crawford, the naturally bigger man, began to turn the screw in round five as he imposed his physical advantages on an opponent who showed little regard for defence and was made to pay the price.

Gamboa showed tremendous guts in the face of adversity as he climbed off the canvas three times before being rescued by veteran referee Genaro Rodriguez after he hit the deck a fourth time in round nine.

Crawford had delivered the goods and HBO were quick to proclaim the WBO 135lbs champion as boxing’s next big thing.

“Crawford turned that fight into his own personal coming out party and he did so with a significant amount of style and dramatics,” American trainer and former world-rated light-heavyweight ‘Ice’ John Scully told Boxing News.

“He came in as a largely unknown guy, he was the underdog in many people’s eyes, but he not only scored the upset he did so while showing an impressive amount of different intangibles that most had no idea if he possessed or not until this fight had happened.

“Fighting your most dangerous opponent to date on a huge stage under the added pressure of a home town crowd watching your every move was certainly no easy task for a guy with the limited amount of professional championship experience of Crawford.”

Rather than shrink under the pressure of expectation ‘Bud’ blossomed and he became energised by the passionate crowd as the fight wore on after Gamboa had raced into an early lead.

“The stage was basically set for it to be absolutely the most disappointing night of his entire life or the most fulfilling,” said Scully.

“The pressure must have been immense.

“When you add all of that to the fact Gamboa enjoyed a significant amount of early success against him, it is really all the more impressive to me that he not only weathered the storm but he came back to overpower Gamboa and stop him in some style.”

Six years in to his professional career and following a terrific performance against his most challenging opponent to date can Terrence Crawford take the next step from world champion to crossover star?

“In today’s world it’s not enough to just be a good boxer,” Scully observed

“Especially for an American boxer, you need to have a certain amount of sellable personality and back story to go with your skills in order for you to really capture the imagination of fans in a way that will put you into the upper echelons of superstar/super money makers.

“I haven’t heard enough from Crawford in terms of audio interviews but if he has the personality, wit and eloquence to go along with his skills, talent and power then there is no reason at all that he can’t be moulded into one of the next superstars of boxing.”

In a division that contains the talents of IBF title holder Miguel Vasquez, unbeaten WBC champion Omar Figueroa and WBA boss Richard Abril, Crawford may well have planted himself at the very top of the lightweight mountain and Scully believes we could see the 24-0 American testing the waters at 140lbs in the not too distant future.

“It would make sense from a fighter and trainers standpoint to allow him (Crawford) a few fights to establish himself more in the eyes of all the fans that are just beginning to hear about him but it would appear the jump to 140lbs, where a slew of high powered names are waiting for him, would make the most success financially as well as in the quest for highly significant marquee fights.

“There is no one at 135lbs with a really big name right now for Crawford outside of Mikey Garcia.”