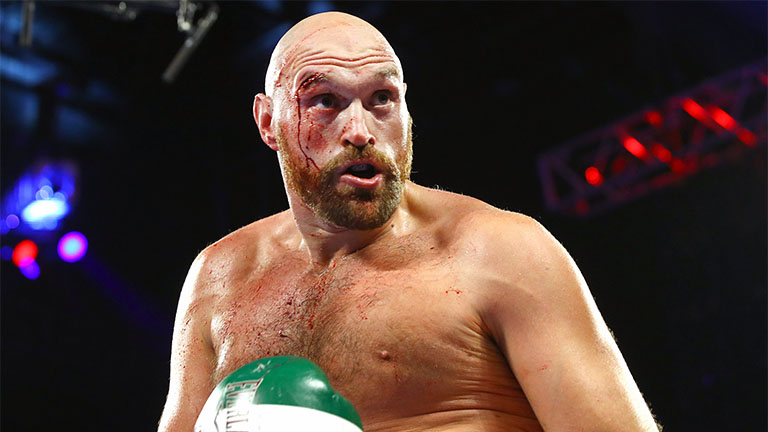 JOHN FURY gave a damning verdict on his son’s performance following Tyson Fury’s 12-round points victory over Otto Wallin in Las Vegas. Fury was cut badly from a left hook in round three, survived a doctor’s inspection in round six and some rough moments – particularly in the last session – to emerge a lopsided winner at the final bell.

Beforehand, it was widely expected that the little known Wallin would not pose a threat. The 20/1 underdog had been plucked from obscurity, by virtue of an unbeaten record and being ranked highly by two sanctioning bodies, to launch Fury into a February 2020 rematch with WBC heavyweight champion. Though the Englishman, weighing his lowest weight since he defeated Wladimir Klitschko in 2015, won widely on the cards, it was far from the convincing showing that had been both planned and widely predicted.

A left hook from Wallin opened the cut in the third but John Fury thought his son was showing signs of poor form long before that.

“I’ve never seen him as bad, he looked weight drained and looked like he left it all in the gym. He’s a very lucky boy to get the win tonight,” John said in the immediate aftermath, live on BT Sport.

“That’s not Tyson in there, I know Tyson. Whatever has gone wrong in that camp, someone is to blame. He didn’t have the strength from the off. His timing was off, his distance was terrible. He never threw a meaningful shot, he laboured. The only ones he threw were off flat feet, really.”

Fury drew with Deontay Wilder last December following a heroic showing that saw him rise from two knockdowns. He followed that with a two round thrashing of Tom Schwarz in June. All signs were pointing to a purple patch of form for Tyson, who left his uncle, trainer and John’s brother, Peter Fury, upon launching his comeback last year. That return came after a battle against depression and obesity as Fury grew ever disinterested with boxing and his own well-being. Ben Davison, only 26, has been credited with getting Fury back into shape and a primary factor in Fury returning to the top of the heavyweight division. John, though, does not seem convinced.

“Whether Wallin was better than he looked from TV, I don’t know. But he didn’t look any better than his last opponent [Tom Schwarz], he didn’t have the skill to capitalise on it. If Tyson had been in there with [Deontay] Wilder or [Andy] Ruiz or anyone he wouldn’t have won.

“He wouldn’t have beaten [Alexander] Povetkin with that performance. He’s my son, I’m a straight talker, that’s the worst I’ve seen my son,” Fury Snr said.

“I am very proud of the way Tyson mauled his way through it. He showed a world class heart and he will come again, but he needs to go back to the drawing board and see what’s gone wrong here. He needs to look in the mirror and say, ‘Things are not right’. He needs to see where it’s gone wrong. I’ve half an idea what’s happened.

“For a man to be in that condition after an eight-week camp and look like he had no breath left after two rounds – what’s happened? He’s emphasised more on losing weight than he has his power and strength.

“What’s happened is, he’s got down to 254lbs and his strength and power has gone with it. That wasn’t Tyson. He was as weak as a kitten from the first round.

“I was looking at him before the fight and his body looked softer than it did last time. His body looked totally different. He looked solid against Tom Schwarz. Accept that your body has grown and you’re never going to be a body beautiful. He’s concentrated on trying to look good more than the actual fight himself.

“He never listens, the dad never knows anything, do they? Everyone else is right and I’m wrong. I saw this coming. I knew it wasn’t a foregone conclusion. You just get these jittery feelings.”

Fury could be seen beforehand singing and larking around with his team behind the scenes. It seemed to have a positive effect against Schwarz but Peter Fury reckoned things have to change.

“It’s an absolute circus [in the dressing room before the fight],” he explained. “If I had my way, the lot would be gone. If he keeps hold of that team, it’s going to cost him his career. The team being Ben Davison, who he’s got there in charge of the business, needs to look in the mirror and say ‘I’m not good enough at the highest level.’ It proved it tonight.

“The cut man was the only worthwhile member of that corner. You have to commend him. How could you fix that cut? It was open like a shark’s mouth. They have saved his life.