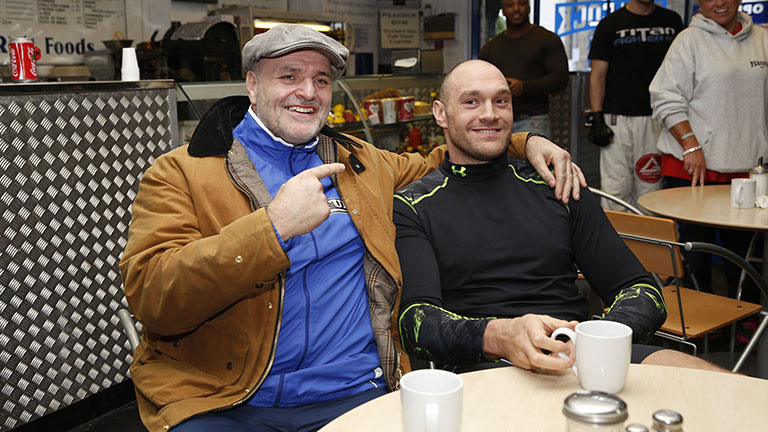 Heavyweights are a different breed. Sure, a disproportionate number of them are madder than a bag of badgers — regular, often heavy concussions and, in the case of the 1980s “Lost Generation”, drugs can have that effect on you. However, there is another sense in which they stand alone as they are the apex predators of the sport and should fight each other for the good of it.

Writing in his 1975 autobiography The Greatest: My Own Story, Muhammad Ali talked about his experience of observing fighters sharing dressing rooms. He noticed that boxers in lower weight classes formed friendships and ‘buddied together’.

Ali was fighting at light-heavyweight back then and had just lost an amateur contest. An old trainer called “Reverend” Williams consoled him. During their back-and-forth that night, Ali, then Cassius Clay, asked where all the heavyweights, who they referred to as ‘dinosaurs’, were.

“Heavyweights don’t hibernate together,” was Ali’s recollection of the old-time trainer’s response. “The dinosaur is different. He’s got his own satellites. Dinosaurs go it alone…[Dinosaurs] are demons of prey…All they are trained to do is tear each other to pieces.”

“The Reverend” made some fair points in his short cameo in Ali’s book, including telling Clay that he had “dinosaur’s blood” in his veins and would one day campaign up there. Heavyweights, in the main, are stuck in the same division as each other. They have to fight at some point and whether they do or don’t, and when it happens, defines whether their era is gold, silver or so much worthless, wasted junk. Heavyweights should spar, get into contention and then go at it.

This is a view shared by “Gypsy” John Fury, the father of Tyson Fury; he believes that the top heavies will one day meet up if the governing bodies can help pave the way for the contests that the fans crave. Everyone talks about Fury, Anthony Joshua, especially since his loss to newly-minted WBA, IBF and WBO holder Andy Ruiz, which took place before I caught up with his father, and WBC holder Deontay Wilder.

Fury, though, told me that there is a dark horse in the division, a man who has earned and is owed a shot at muddying the waters even further if the ABC boys hand him his due. In his mind, the WBC’s call to match Tyson Fury against Dillian Whyte in an eliminator was an attempt to squeeze more cash out the division, something that he believes was an insult to his son and disrespectful to Whyte.

“The WBC ordered Tyson to fight Whyte, which they knew will never take place,” he raged. “Why order an eliminator to fight a man you’ve already beaten — my son beat Wilder, I don’t care what anyone says. Come on now, give that poor kid Dillian a break and let him fight for the title. This WBC lot, I don’t know where their heads are at. They just want to drum up a bit more money at the expense of Whyte.

“Stop separating these fighters and you will win the fans back. Whyte against [Oscar] Rivas is still a great fight. It is 50-50. Nathan Gorman against Daniel Dubois is another one. You can’t separate them four. Dave Allen against David Price is another one. Potentially great fights and they are not even at the highest level. The fights are out there.

“I just give thanks to all of the fighters if they do make the fights because without all of them there wouldn’t be any boxing to enjoy. Tyson. Wilder. Joshua. Even Whyte and Dereck Chisora. You can’t have a party if you are on your own. There are some good dance partners right here in Britain.”

Tyson meets Germany’s Tom Schwarz over 12 at the MGM Grand in Las Vegas on Saturday night. It is his Vegas debut against what many argue is a handpicked opponent designed to make him look good. His father issued a few words of warning when defending the decision to fight the 24-0 (16) contender.

“An easy fight?” he replied. “Do you want to tell me how a man standing at 6ft 5ins and weighing 16 stones is an easy man to fight? This is his world title fight. He is in the same position Tyson was in when he fought [Wladimir] Klitschko. Anything can happen: a big punch, lack of motivation, a lapse in concentration, and then bang!”

As for his son, Fury naturally rates him higher than even Fury’s most ardent fans, and he has plenty of those, so he believes there is only one recent fighter to compare the former heavyweight Champion to when summing up his style and potential earning power if he secures more major fights. And it isn’t Adrien Broner.

“Look at [Floyd] Mayweather, he made a billion dollars and got out of it,” he said. “For my money he is one of the best fighters I’ve seen in my lifetime. He does everything right, and that is what made him the biggest star in boxing. Young kids needs to look at him and Tyson, copy what they do and get out with the ability to still string a sentence together. Get in, get your money and get out of it. People need to enjoy the trappings while they can. What is the point of money if you end up like [1970’s heavyweight contender] Jerry Quarry?

“Fighters are not there to be bashed to pieces for the enjoyment of the crowd. Those days have gone because Tyson and Floyd have shown a new way. If people want those barbaric wars then go back to the gladiator days. Tyson has invented a new style of boxing. Other fighters are copying it so that they can avoid looking like a boxer when they retire. People say it is easy. Well, let them try it themselves.”

On a final note, the Furys are proud of their traveller heritage, and can trace their families back generations, yet both Tyson and his father readily acknowledge that they value their roots and values instilled by them, but they haven’t lived what we tend to perceive to be the traditional traveller lifestyle.

“Tyson hasn’t travelled a mile in his life,” he declared. “Look at me, I came out of a caravan when I was 15 years old. My dad bought a small holding. But I am a traveller by blood. It is in me 100 per cent on both sides even though I also haven’t travelled more than a couple of miles in my entire life. What my heritage has taught me is that there is good and bad in all walks of life. I don’t even know much about other travellers, I try to keep myself to myself and let others live the way they want to live.

“What I do know is that we’ve got no qualms with anyone. I respect people who respect me. I don’t care where you are from or what religion you have. Imagine if everyone in the world could get on board with life and say: ‘There is no need for all this squabbling, wars and fighting’.

“If you cut a Muslim he will bleed the same red blood that we do. Christians as well. Anyone. In life, you only have problems with wannabees, people who want to be who you are but who look in the mirror and deep down know they can’t so they cause problems with drugs, drink, whatever. Let’s sort it all out.” Indeed, and if the division sorts itself out we may not get the gold-standard era served up by Ali, Joe Frazier, George Foreman, Ken Norton, and an often overlooked solid supporting cast, but we might get something like the silver era of Lennox Lewis, Evander Holyfield, Riddick Bowe and Mike Tyson. If this lot can do it when still in something approaching their primes then us fans will be the real winners.