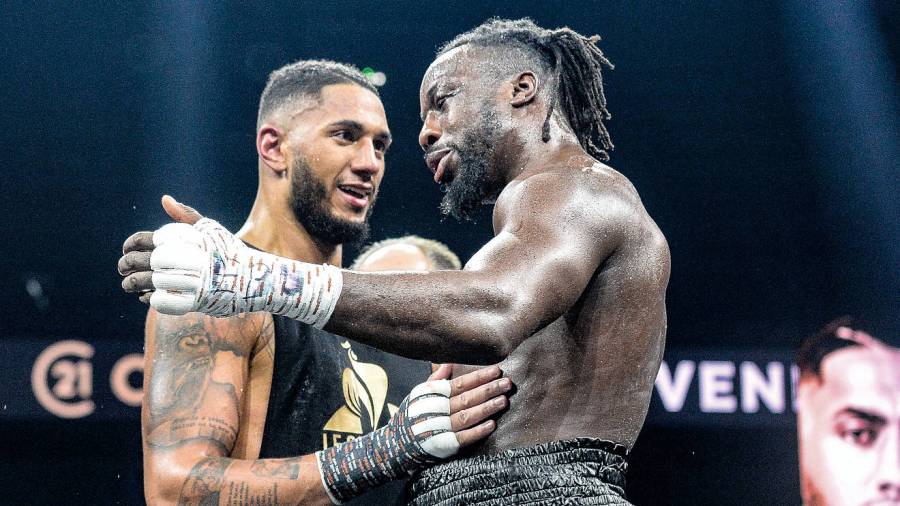 AT the beginning of last month (March 5), former cruiserweight Joel Tambwe Djeko, 17-3-1 (8), travelled to France to face 2016 Olympic super-heavyweight champion Tony Yoka. Despite ultimately being stopped by Yoka, Djeko was able to take the touted Frenchman into the 12th and final round – further than anyone else has managed. Here, the 31-year-old Belgian reflects on the fight and provides his assessment of Yoka.

Your fight with Yoka was your first proper contest as a heavyweight. How did you find the experience?

Fighting a highly ranked heavyweight and Olympic gold medallist was a good challenge for me. He’s 6ft 7ins – really huge! I took the fight because I’m a guy who loves a challenge. Before the COVID-19 pandemic hit, the plan was to ease myself into the heavyweight division with three or four fights in my first year. The plan was to build my confidence up slowly for this new journey as a heavyweight. But everything changed when COVID came along. So many boxers haven’t been able to fight – it’s been crazy. That’s why I took the Yoka fight. At the present time, you’ve got to take these opportunities. I looked at the fight as a chance to show myself what I can really do in the heavyweight division.

After the fight, at first I was a bit sad because I’d lost. I’m a perfectionist, so I’m often hard on myself. But reflecting on it now and having watched the fight back, I feel proud of the performance I put in. To take Yoka into the 12th round in my first proper fight at heavyweight, I’m proud of that, especially as I hadn’t had the time to acclimatise to the new weight yet.

What was it like fighting without a real crowd?

We were allowed to invite around 15 of our family and friends each, so they all made quite a bit of noise! But it was strange fighting in front of such a small number of people. In a way it feels like you’re sparring rather than actually fighting. I can’t wait to fight in front of a proper-sized crowd again. That atmosphere really makes a difference. It helps me to get in the zone.

Prior to the bout, you hadn’t competed for nearly 14 months because of the pandemic. Did the COVID restrictions also impact your training and preparation?

I had to improvise a lot when preparing for the fight. Being based in the UK, I wasn’t able to do all of the things that I’d normally do in training, what with the COVID restrictions on gyms and training partners. Normally I’d spar with Joe Joyce, but this time I couldn’t because of the quarantine rules – I couldn’t commit to spending 14 days in quarantine in a hotel.

You weighed in at 231lbs for the fight – the heaviest of your career. Moving up from cruiserweight (200lbs), how did it feel carrying this extra weight?

I definitely felt a bit heavier in the ring. I’m looking forward to making some adjustments, like increasing the strength in my legs in order to make it easier for them to carry the extra body weight. Watching the fight back, it was noticeable that I wasn’t dancing and moving as much as when I was boxing as a cruiserweight. So my footwork is something that I’m going to look to improve as a heavyweight. Having three or four fights before facing someone like Yoka would’ve given me the time to get used to the extra weight, but that wasn’t possible because of the pandemic.

What did you make of Yoka as a fighter?

Yoka is a well-schooled boxer but his style is pretty simple – the left jab followed by the right hand. With his long arms you can sometimes see his counterpunches coming from far away. I’d say he’s lacking a savage streak. Anthony Joshua is a well-schooled boxer like Yoka, but he’s got that savage streak too. He can switch his mindset to become a savage and make it into a proper fight. Dillian Whyte has got that street-fighting mentality. Deontay Wilder has got it too. Even Tyson Fury has got it. Fury has got all the boxing skills and the dancing footwork, but he’s also got the savage instinct. Yoka is a great athlete, but I don’t think he has the savage instinct. That’s why if he comes up against a big heavyweight who does have the savage instinct, I think he’s going to have trouble.

I could definitely feel the difference in power from Yoka’s punches compared to the punches from the cruiserweights that I’ve fought. But even when I was fighting as a cruiserweight, I always sparred with heavyweights, so Yoka’s power didn’t shock me. I don’t think he’s the most powerful puncher in the heavyweight division. I’ve sparred Filip Hrgovic in the past and his punches are really hard, even with 18oz gloves on. Yoka is not the most powerful guy, but his punches are precise and he’s able to stick to a strategy well.

Do you think Yoka is good enough to be a world champion?

He’s a good fighter, but can he become the heavyweight champ while guys like Joshua and Fury, and maybe even Wilder and Andy Ruiz Jnr are around? I’m not so sure. Once those guys have retired, then I think Yoka can become the next champion after them.

What are your plans for the rest of the year?

I’d like to have another three or four fights in order to get used to carrying the extra weight as a heavyweight. I want to get some victories and prove that I belong in the division. I want to be a part of the heavyweight game – that’s the dream of any kid, isn’t it.