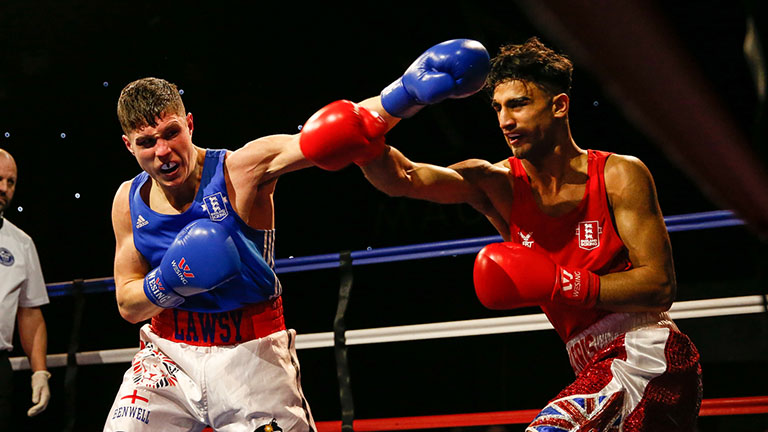 Birtley boxer Joe Laws is going to be a thrilling addition to the professional ranks. He speaks to Jack Figg

After a long amateur career how did it feel to make your professional debut?

It was mint, I think maybe it was a bit overwhelming I sold over 350 tickets and it was just mind blowing when I walked out the arena and I saw all my support. I think I had a good amateur career, got to the finals of the ABAs, boxed for England, so everything I ever wanted to do as an amateur I accomplished so I think it was time to turn over.

What was it like to be a part of the successful Birtley ABC, with the likes of Pat and Luke McCormack and Calum French?

It is unbelievable, we’re all like a family, we’re all very close. We all train together, we all push each other to the limits and I feel I believe that is why we’ve had so much success. We train hard, we spar hard and we’re all there for each other and we push one another on when it gets tough.

Now you’ve turned pro will you still be training at Birtley?

Yeah definitely, I’ll be doing the same sessions with the same club I’ll just be doing more one to one sessions with Graeme [Rutherford] and I’ve come on leaps and bounds. I think too many boxers leave their core gym which they’ve known for years. A good coach is more than just a marriage, I think a coach has actually got to know a boxer, know what makes them tick, know when they’re tired and I’ve been boxing with Graeme for six, seven years now and I wouldn’t go with any other coach or any other coach apart from Birtley.

What makes the club so successful?

We train very, very hard and Graham’s the man behind everything. He changes the sessions every week, and he drills us and it brings success.

How confident are you your amateur experience will help you in the pro ranks?

My style has always suited the pro’s, I’ve always been super fit and strong for the weight, I’m exciting and I sell a lot of tickets and when you put them all together with a bit of luck and heart and dedication I’m more than confident.

Are you excited to showcase your pro style in the paid ranks?

Definitely, especially with the smaller gloves. I know I can’t neglect my boxing because every knockout comes with boxing first, so I’ve still got to concentrate on my boxing first and foremost but with those small gloves it takes nothing. Like in my first fight one left hook and it was all over.

Does it bother you that you didn’t win an ABA title before turning professional?

Yes it does, but as an elite amateur I’ve always competed in the ABAs but it only comes once a year and you need a lot of luck; luck in the draw, luck on the day, but I’m happy I reached the final but now I’m more concerned on the pros.

Where would you like to be this time next year?

I just want as many fights as I can and keep learning the game. After a year or so hopefully I would’ve had a handful of fights and on the verge of titles.

How do you feel going into your second fight, having got the debut out the way?

I can’t wait. In my first fight I think in the first two rounds I was just rushing a bit because I wanted to impress too much. Having had my debut out the way I’m going to concentrate on what I’ve been doing in the gym and I want to put a good performance on.

Is there anyone at super-lightweight you are targeting?

I’m not going to be one of these boxers who sit here and call everybody out because I’ve only had one fight. I’m going to take it one fight at a time, keep getting the wins in and whenever a fight comes, I’ll smash them.