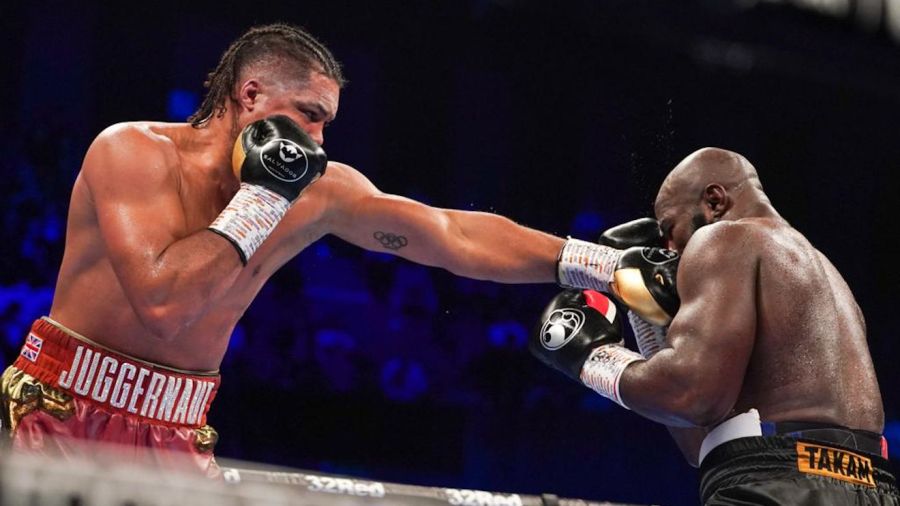 HEAVYWEIGHT  “Juggernaut” Joe Joyce walked through everything proud veteran Carlos Takam threw at him and stopped him in the sixth at the SSE Arena to preserve his world rankings and keep the Commonwealth title.

Takam protested furiously after referee Steve Gray waved it off 49 seconds into the round.

Boxing News counted 18 unanswered punches from Joyce before Mr. Gray intervened and though not every shot landed cleanly or with maximum force, they had Takam on rubbery legs and Joyce still had plenty in the tank and has heavy hands.

No question Joyce was heading for victory but there were some anxious moments in the opening three rounds.

The 35-year-old admitted to being “mildly” hurt by the rights Takam repeatedly smashed off his chin, bringing gasps from the crowd, before Joyce turned the fight his way from the fourth.

He blasted Takam with hard body shots and at the end of the round, the 40-year-old was gulping in air having put everything into every punch.

For Joyce it was first outing since he bust up Daniel Dubois last November, a fight he says is unfairly remembered for Dubois’ surrender rather than his disciplined performance. Joyce was more reckless against Takam, but ultimately, he was able to walk down and beat up a determined competitor who had won all four since Dereck Chisora knocked him out in eight rounds in July, 2018. Nine months before that he had lasted into the 10th round with Anthony Joshua at 12 days’ notice. Joyce, the seventh ranked heavyweight going into this, did a better job on paper but he gave his supporters some nervous moments.

Only twice in his career had Joyce been heavier than 263lbs, 14ozs. That gave him an advantage of more than 15lbs and Joyce was also 4½inches taller. But the height difference may have been to Takam’s advantage. The Londoner didn’t appear to see the rights Takam slung at him after slipping his jabs.

Joyce had struggled to detect similar shots launched by the 6ft 2 ins Bermane Stiverne before coming through in the sixth-round in February 2019 and the Takam fight unfolded in much the same way. Once he had taken Takam’s best punches, Joyce went through the gears and at the bell to start the sixth, he put together a left-right-left hook that knocked Takam onto his heels.

Takam sought to regroup, but when he tried to find his legs, they weren’t there. He stumbled and Joyce went for the finish. Takam got through his initial attack but once Joyce slowed the pace down and started to pick his shots, the end was near, with a left hook and straight right the final blows.

The British and Commonwealth welterweight titles changed hands on this Queensberry Promotions show. Nottingham’s Ekow Essuman stopped Chris Jenkins in the eighth of a scheduled 12.

For six rounds, there wasn’t much between them. Jenkins had spells boxing well behind his jab, then Essuman would get on the front foot and bang in hard body punches.

Essuman was the busier in the seventh and after he shook up the Welshman early in the eighth with a right hand, he went for broke. Jenkins was pinned in a neutral corner and Essuman got through with enough clean punches to convince referee Ian John-Lewis to step in at 0-43. Judges were Victor Loughlin, Marcus McDonnell and Steve Gray.

The towering Hamzah Sheeraz had his first fight with new trainer Ricky Funez and took out former Spanish champion Ezequiel Gurria in the fifth of a scheduled 10. Referee Marcus McDonnell waved it off after the second knockdown. The result extended Sheeraz’s stoppage streak to seven fights.

The 22-year-old from Ilford went about his business in his usual measured manner.

There were signs in the third that Gurria was feeling Sheeraz’s punches, but, as ever, there was no rush for Sheeraz and when he decided to go through the gears in the fifth, he produced a quality finish.

The Spaniard went down from a combination that started with punches to the ribs and ended with a left uppercut to the chin and Mr. McDonnell waved it off after a right hand-left uppercut dropped Gurria heavily again at 2-23.

Streatham southpaw Chris Bourke regarded his 10 rounder against James Beech as “the next step” at 122lbs after a points win over Ramez Mahmood for the vacant Southern Area belt and a stoppage of English champion Michael Ramabeletsa. Beech had been outpointed by Brad Foster in a challenge for the British and Commonwealth titles last July and Bourke did a comparable job.

Beech was reluctant to lead off after feeling the force of Bourke’s counters early on. The Walsall fighter struggled to reach Bourke with his jab – his best punch – and right hand, and when he fell short, he was punished.

Told to up the pace ahead of the fourth by his corner, Beech ended up being relieved to hear the bell after Bourke went with him.

Ladbroke Grove heavyweight David Adeleye dropped down a couple of levels after his close shave with Kamil Sokolowski in April and stopped pot-bellied Bulgarian Mladen Manev in the fourth of a scheduled six.

Adeleye looked to bring the shorter Manev onto his right uppercut and when he found the punch in the fourth, the effect was dramatic. Manev dropped his hands and half turned away, blinking. His knee dipped, but he decided against taking a count and when Adeleye set about him, Manev tried to slug his way out of trouble.

Adeleye drove him to the ropes and dropped him for ‘eight’ with another right uppercut. Adeleye needed only one more punch, a left hook to the body that dropped Manev in a heap. Referee Ian John-Lewis signalled the finish at 1-54.

Ali stepped in at 48 hours’ notice and at the weigh in he promised Noakes a six-round work out. It didn’t turn out that way, Ali pulling out after the second round with a broken nose. Expecting to go the distance, Noakes put more thought into his work and the more patient approach proved effective. He bloodied Ali’s nose in the second and turned southpaw late in the round to have him grabbing after a right uppercut.

Bexley’s Micky Burke was another from the iBox gym who had an unexpected early night, Paul Cummings being counted out 2-12 into the fourth of a scheduled six by referee Kieran McCann. It was only the eighth time Warminster’s Cummings had been stopped in 52 fights. The finishing punch was a crisp left hook to the body. Cummings remained on his knees while Mr. McCann counted him out.

Finchley heavyweight George Fox, trained by his father Don Charles, was 42lbs heavier and two inches taller than Manchester debutant Reece Barlow and used his left hand well to keep him on the defensive throughout their four threes. Mr. McCann scored 40-36.

Reading’s Charles Frankham, back in the ring for the first time since June 2019 and now under Queensberry, was too sharp for Telford’s willing Dean Jones, winning every session of their four-threes for Mr. John-Lewis.

There was a sickening end to the show opener. Wolverhampton cruiserweight Matt Sen needed medical attention for several minutes after Poland’s Michal Soczynski blasted him out 117 seconds of their scheduled four rounder. Sen didn’t see the final punch. Having been dropped, Sen was dazed and looking elsewhere when the fight resumed and Soczynski smashed him with a left hook. Mr. McCann immediately waved it off.

The Verdict Joyce weathers a tricky start to take a good win on paper.