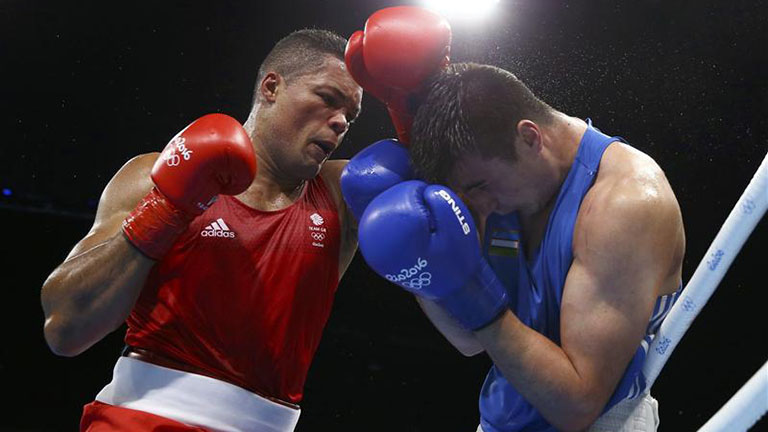 BRITSH super-heavyweight Joe Joyce will leave Rio de Janeiro with an Olympic medal. He overwhelmed Uzbekistan’s Bakhodir Jalolov in their quarter-final at Riocentro, Pavillion 6 on Tuesday (August 16). The thudding weight of his punches to the body and the head hurt the Uzbek and as Jalolov wilted, Joyce simple grew in strength, imposing two counts on Bakhodir in the last round. Joe won a wide unanimous decision.

“That’s what I’m aiming for, to beat my opponent so I’m guaranteed the win,” Joe said. “I just want to put my best effort in and make sure I get that win. I don’t want to leave anything to chance or whatever. I need to secure my future and my success.

“It would have been nice to land a good shot and put him down but as they get more skillful it’s a lot harder to land those big shots.”

He hasn’t crossed paths with Floyd Mayweather yet, who has been attending the boxing. “Apparently he was watching my bout, which was good. Hopefully I put on a good performance, considering it was my first bout,” he said

His semi-final will be against Ivan Dychko of Kazakhstan will take place on Friday (August 19). Joyce is determined to go all the way. “People look to the gold medallist as the highest thing you can achieve in amateur boxing, or open boxing, what it’s now called. That’s the main priority for me, to box to the best of my ability and achieve my goals, my dreams,” he said. “I’m feeling confident.”