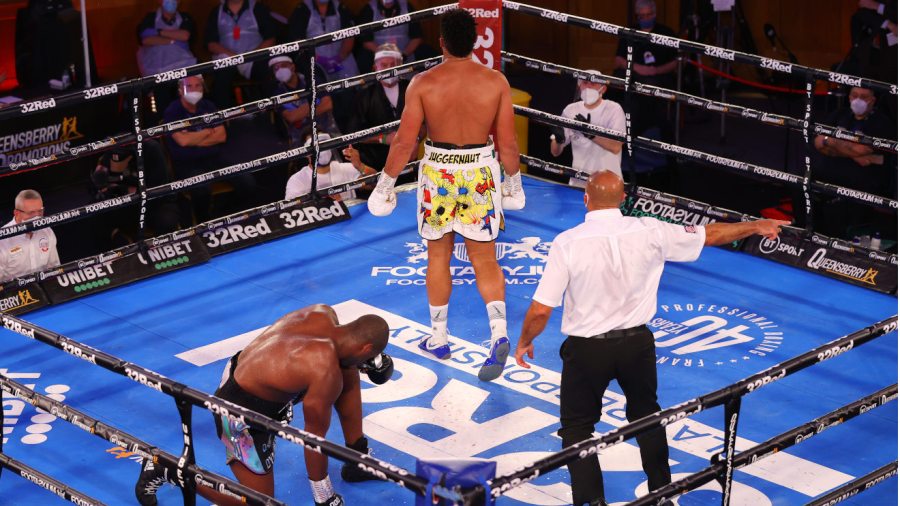 With a badly damaged eye, Daniel Dubois takes a knee and stays there for the full count. Joe Joyce is the new European, British and Commonwealth champion after an astonishing heavyweight fight

An astonishing fight between Joe Joyce and Daniel Dubois on Saturday (November 28) was eclipsed by an even more remarkable finish.

Despite being a vastly successful amateur, an unlucky Olympic silver medallist and far more seasoned as a professional, Joyce came in as the underdog against Dubois for their European, British and Commonwealth title fight at Church House in Westminster.

There was a reason for that. Though he was much the younger man, 23 to Joyce’s 35 years old, Dubois had looked devastating in his 15-fight pro career, most recently with an explosive finish against Nathan Gorman.

Dubois looked dangerous too in the early rounds with Joyce, heaving his hook across and unleashing his heavy cross. Dubois fired in flush shots to start the third round. These rebounded off Joyce’s jaw. Thunderous shots that would have floored lesser heavyweights. But Joe just kept on with his work. He moved off, clinched occasionally, and otherwise chipped away with tireless jabs. He chopped his left down again and again. Sometimes he turned it in to hit the body, other times the left hovered in front Dubois’ eyes, distracting him and disrupting him from landing his own jab. Most often it chopped down. Tirelessly Joyce used it, backing it up with his right just to maintain the pressure.

And that pressure proved constant. Dubois may have been hitting Joe with his heavy artillery but Joyce was absorbing that power, acclimating to it and all the while Dubois was marking up badly. Daniel might have hit Joyce with some of his best shots, but as he was doing it Dubois somehow was the one the taking all the damage.

He looked distressed in the corner between rounds, the swelling over his eye only getting worse and yet the ending still came as a shock. 36 seconds into the 10th round, as Joyce was just wresting the momentum of the fight his way, Daniel stepped onto another heavy Joyce jab. Joe hit him fully on the damaged eye. It might just have been a jab but the pain caused Dubois to turn away and take a knee. He did not rise in time to beat referee Ian John Lewis’ count.

Dubois lost a fight he was expected to win. He lost by stoppage. That happens. But he will now face questions as to whether he was looking for a way out, whether he quit. Only he will know the answer.

It will be a serious mental challenge to rebuild from this defeat. But Dubois can come back, he is a young man and he has the raw talent. It is though up to him.

“He caught me with a good jab,” a stunned Dubois said afterwards. “I couldn’t see out the eye. It happens. I can’t explain.”

Joe’s reaction to his London rival taking a knee and staying down: “I was glad it was over.”

“I’ve felt power like that before,” Joyce continued. “I’m blessed with a good chin so I can keep going and keep moving forward.” That is some understatement.

Joyce might not have a great deal of time left in his professional career. But he is marvelously positioned. He should take Dubois’ high ranking with the WBO. That puts him in the frame to fight their current number one contender, Oleksandr Usyk, a previous opponent of Joyce’s as amateurs in the World Series of Boxing, or perhaps ultimately to challenge an old sparring partner of many rounds – the unified heavyweight champion Anthony Joshua. Once the underdog, Joe Joyce is now in the driving seat of his career.