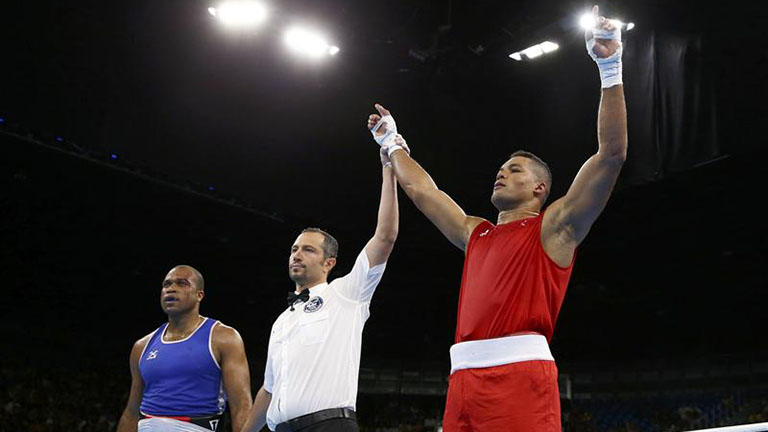 GB’s Joe Joyce wins inside a round at Riocentre in front of the world’s most famous fighter, writes John Dennen

JOE JOYCE won his first Olympic contest at Riocentro on Saturday (August 13) contest in comprehensive fashion. He marched forward into the centre of the ring from the first bell, firing off a combination that Davilson Dos Santos Morais, a humble super-heavyweight from Cape Verde, could not block. Dos Santos Morais was fortunate to be at the Olympic Games, who unfortunate if you consider how the bout ended. Joe maintained a high tempo, slugging his victim across the ring. He handed Davilson two counts before a right hook bent Dos Santos Morais like a stalk, dumping him unceremoniously on the canvas.

“Unpredictable shots, got a bit messy inside, but it was good to land some shots that were some good powerful shots on him and get the first bout out the way, get him out quickly. You don’t need to be in there too many rounds taking punishment so I just thought I’d put an end to it,” Joyce smiled afterward. “I didn’t want it to go on too long.”

Joyce didn’t realise it at the time but Floyd Mayweather himself was in the crowd, looking on. Joe admitted he had been on edge beforehand. “In the flats, the GB headquarters, our block, in my room, the nerves got to me a bit because it’s the Olympics, I was thinking about the whole thing but obviously once we got down here, once we got ready, got down here, I was fine ready to go,” he said. “It’s great that he [Floyd Mayweather] is about. I did see on Twitter that he was coming but I didn’t know he would be here today. I thought he would still be jetlagged or something… Hopefully he saw something good!”

In the quarter-final, on Tuesday (August 16), he will box Uzbekistan’s Bakhodir Jalolov, a tall southpaw. As to whether he considers that style difficult, Joe noted, “If they’re [Olympic gold medallist, Oleksandr] Usyk they are.”

Joyce himself seemed utterly relaxed, considering he is one bout away from an Olympic medal.