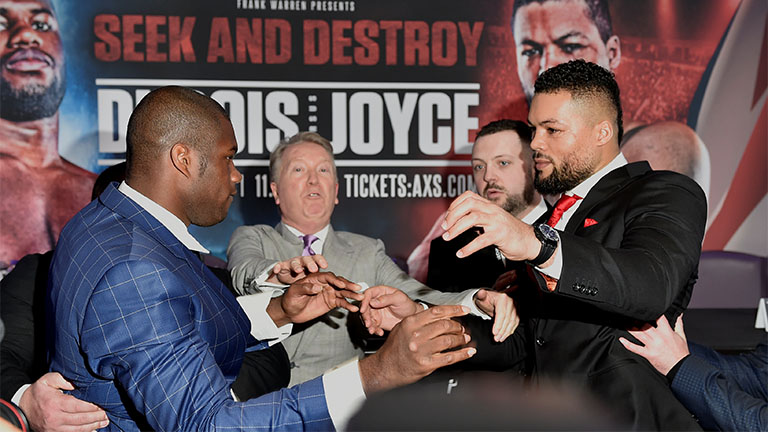 Ahead of the most important fight of his career against Daniel Dubois, Joe Joyce will have a new trainer in his corner

THERE can be no doubt that Daniel Dubois vs Joe Joyce is a real fight. The two meet on April 11 at the O2 Arena in a clash that has implications far beyond the British heavyweight title on the line. The winner will be a genuine contender in the division and can expect to be in the frame for a world title shot over the months to come.

But for Joyce, a 34-year-old Olympic silver medallist, it also comes with tremendous risk. It would be a long way back from defeat and Joe, unlike the 22-year-old Dubois, does not have a time on his side.

While this is a 50-50 fight, a key factor in the build up to this contest is Joyce’s corner. He will have a new trainer. We don’t know who it is yet, all he and his team would reveal after today’s press conference was that they would be based in Las Vegas and Joyce will be using the UFC gym.

It’s a serious complication for Joyce. He will have to gel with a new trainer over the course of one camp ahead of the biggest fight of his professional career. Although he has only had 10 pro contests, he has already had three trainers; Ismael Salas, Abel Sanchez and Adam Booth. All are highly respected in the sport and Booth had been thought to be a good fit for Joe.

“Adam’s a great trainer. But I believe where I’m going, the plan we’ve got is a better situation. I love training there at Adam’s gym and being close to home but I think I do better in the sun and in an away camp. I need to make sure 100% that I’ve done everything right and make sure I get the win. I don’t want to look back and say I could have done this, could have done that. I’m taking myself away and putting myself in the best situation I can. I’ve only got one shot at this,” Joyce said. “We leave to Vegas to go into training camp tomorrow. We’re going to have some great sparring and training and get myself into the best possible shape. I just look forward to it. It’s going to be an explosive fight. It means a lot for the winner.”

“There’s a lot more things to it than just being a physical specimen. Obviously he [Dubois] is very strong. I don’t know if he can take a punch yet but I’ll test him on that in April,” he added.

“I will find a way to win. I might get knocked around a bit but I can take it and I can keep moving forward.”