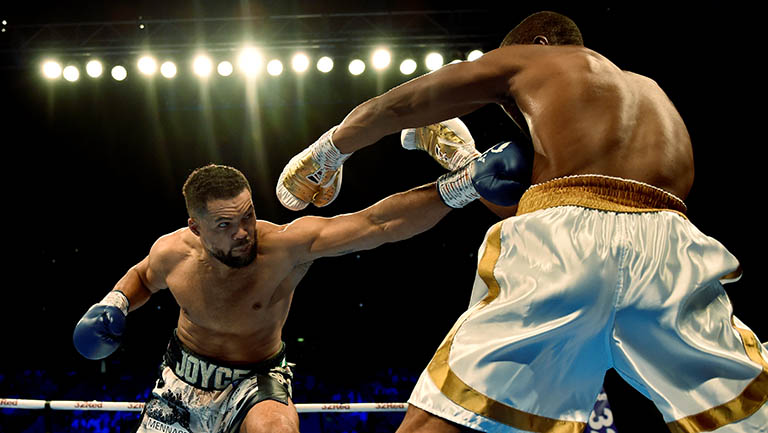 BRITISH heavyweight Joe Joyce worked his way through a tough, gruelling 12 round contest with America’s Bryant Jennings at the O2 arena in London on Saturday (July 13).

Joyce won early rounds, letting his hands go as he marched into the American. But Jennings adjusted and, as the Briton’s output slowed, he began to take advantage. Jennings blocked shots with his arms and popped Joe to the head with countering left hooks. Those blows were clear, and eye-catching, but too infrequent. Joyce simply continued to grind forward and, while Jennings brought up a swelling beneath Joe’s right eye he didn’t manage to force him backwards.

All the while, Joyce continued to worry at his guard, club punches through and grind out a unanimous decision, aided along the way by referee Steve Gray deducting a point from Bryant for a low blow.

This was never an easy bout for Joyce. Jennings is a heavyweight contender who went the distance with Wladimir Klitschko back in 2015, was halted by Luis Ortiz that same year and only in January went into the 12th round with Oscar Rivas.

A good result for Joyce, a 2016 Olympic silver medallist, who has now gone the championship distance for the first time and has still only had 10 professional fights.