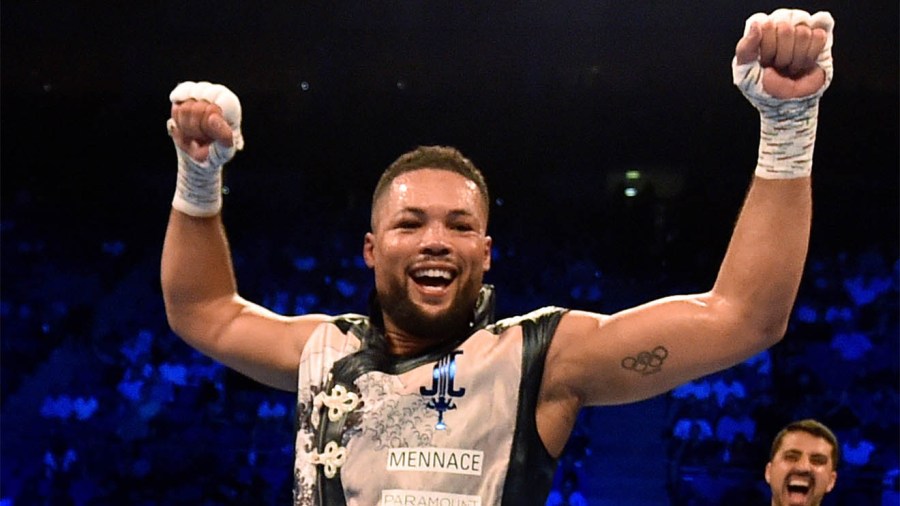 But, in his own words, Joe Joyce says it would be a massive British fight for him

I was meant to fight Marco Huck on January 11 (for the European title) but that fell through. It’s still annoying that I haven’t boxed since July. That’s a long time in camp training for nothing. I’m keen to get back through the ropes.

There’s talk of me fighting Daniel Dubois. It’s a bit of a step down, domestic, Commonwealth level, but obviously Daniel Dubois is a big name. He’s been built very well, a lot of people know who he is, even though he’s been fighting guys like Kyotaro Fujimoto, who would be a demolition job for me as well.

Globally it’s not that big but domestically it is huge. It would be massive for British boxing fans and I’m sure they would get behind it.

I think Daniel is very strong and he can throw some heavy leather. I think he’s quite predictable and basic. He’s got a very strong jab, it’s like a back hand. He’s got a massive hook. He’s a rising star.

I sparred quite a lot with him on GB. I was with Frazer Clarke and Anthony Joshua more often but I’d jump in with Daniel occasionally. He was just a young kid. I’d just pepper him with shots but obviously I’d have to be careful because he comes back with big bombs. Nothing to be worried about, it was good competitive sparring.

I think Dubois has definitely improved. That told the tale with him against Nathan Gorman (even though I think Gorman didn’t really show up for the fight). But who has he fought? He hasn’t really fought anyone yet. All the people on my record have all got winning records and they’re coming to fight, whereas his, obviously because of his age, are fights to build him and kind of learning fights. Because he’s got so much time, he can keep on having these and getting the knockouts, getting in and out of the ring and getting really comfortable in the ring. Whereas I haven’t got as much time as him but I don’t really need any time because I’m already a world level boxer. Whereas he’s British and Commonwealth, I’m looking to get a world title as quick as possible. So it’s a bigger risk for me taking the fight because if, or when I beat him, he’s still got loads of time.

I’m interested in fighting anyone who gets me closer to a world title. I just need to see what’s on the table. I need to just make my way into the inner circle of Joshua, Wilder and Fury. Any way I can get to there quickly then that’s the route for me to go. Or the fights that make the most financial sense, like Dubois possibly.

I beat Filip Hrgovic in the World Series of Boxing. I enjoyed it, Hrgovic is a major boxer. We could have crossed paths again in the European Games or the Olympics. It would be a good fight if I fought him again but it would have to make sense, for a title or for the money.

I fought Oleksandr Usyk in the World Series of Boxing. He’s obviously a very skilful boxer. I think he’s put on a bit more size and with his age as well I think it’s slowed him down a bit. It might be a lot easier for me to land my shots now. He would have to tough it out with me for 12 rounds, which obviously is risky for him. He was a lot a more seasoned, technically a better boxer than I was at the time, I was just using brute force and non-stop punching and fitness to try and beat him. But I didn’t really have as much skill as I have now. When I look back at it, I just cringe at my technique. It wasn’t like I’d been in the game for that long, whereas he’d probably boxed since he was kid.

He should be fighting Dereck Chisora next. He might start picking him apart but he’ll probably be careful because Chisora can be dangerous. You know what you’re going to get with Chisora, it’s going to be a slugfest. But then if he can’t land anything on Usyk, it’s going to be a problem.

I’ve had my little break, I’m back to the gym just training hard. There’s maybe a potential date for me to fight next in February or April.