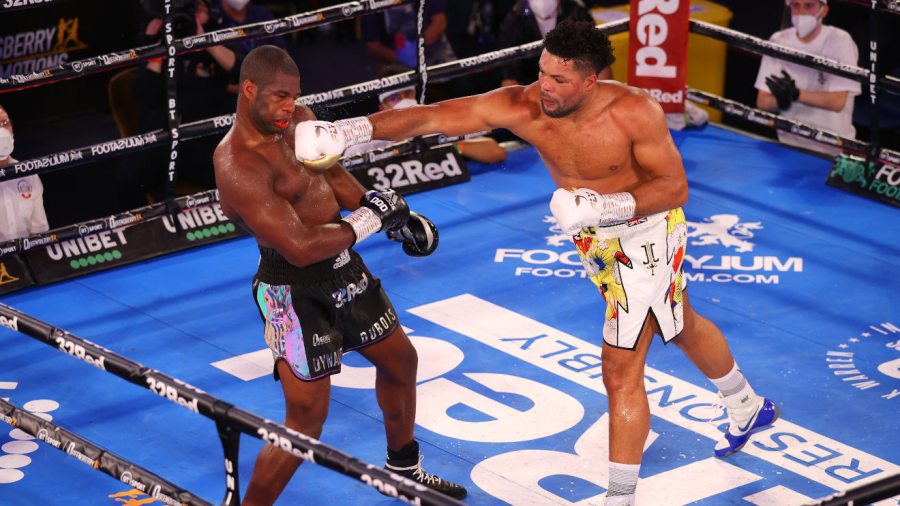 Joe Joyce marches on while Daniel Dubois is left to lick sizeable wounds, writes Matt Christie, but both deserve credit for taking the fight.

AS the pain from the final blow burrowed into Daniel Dubois’ left eyeball, the heavyweight dropped to one knee and waited for referee Ian John Lewis to count to 10. In that moment of self-preservation, 36 seconds into the 53rd round of his professional career, 23-year-old Dubois decided he didn’t want to fight Joe Joyce anymore.

The cruel world of boxing turned on Dubois. Gone was the promising young heavyweight powerhouse, the king in waiting, the prospect who could do no wrong. In his place, grateful for safety on the canvas, was a quitter.

Quitter: A person who gives up easily or does not have the courage or determination to finish a task.

After drug cheat, it’s the filthiest, dirtiest label that can be put on a boxer and one, I’d argue, on this occasion is grossly unfair. Dubois was suddenly a quitter, not because he gave up easily – he didn’t – but because other boxers, both at ringside inside Westminster’s Church House and on social media, classified Dubois as such.

Boxers possess not only super-human bravery that affords them the right to pass judgement on the warrior-code they live by, but also super-human egos that can disguise any true empathy. For some, their own machoism is boosted via an observation that a fellow boxer ‘quit’ and in turn an inference they would never do so themselves. But to put oneself in another’s shoes is never an exact science, irrespective of the paths those attempting to do so have taken.

Dubois fought with one eye for several rounds, his orbital bone in his skull was fractured and the nerve damage he was enduring must have made Joyce’s gloved fist feel like a knife. His decision to stay down in the 10th round – which may or may not have been a decision other boxers would have made in that instant – was followed by another, to face the music and the TV cameras and be interviewed. Such pluck is rare in a ‘quitter’ and so too is the courage Dubois will now draw upon to get himself back to full health; a broken eye socket is a difficult injury to recover from when you’re a boxer. One hopes the heavyweight gets the chance to again prove exactly how brave he is.

Irrespective of one’s view of the finish, what led to it deserves only universal acclaim. Joyce, 35, was a clear underdog going into this contest despite the fact he followed a long and successful amateur career by taking care of 11 predominantly solid professional opponents with the minimum of fuss. Those years of experience proved to be the difference.

Dubois was the first to score, with a left hook to the body, but by the end of the opening round Joyce was establishing a sense of control. He could be seen before the bout practising in his dressing room with trainer Steve Broughton, slipping an oncoming left and countering to the body. Within a minute of the opening bell he executed the move and more besides: The Putney man aimed high and low, was largely accurate, and as early as the end of the first round, there was damage to Dubois’ left eye.

Joyce’s jab, which is like no other left jab you will see in top level boxing, became the fight’s definitive punch. His feet and defence also break the rules of textbook boxing but they somehow worked in tandem to keep Dubois and his right hand at bay. Joyce looks like he can’t box, yet he boxes so well; it’s that oxymoronic skillset which is perhaps his biggest strength. Trying to prepare for the intricacies of Joyce is like a swimmer using a ball pit as preparation to cross the Channel.

There was a spring in his step in London. There were feints and head movement, the danger from Dubois’ powerful right was nullified and there was true appreciation of distance and timing. Joyce – in his own unique way – took away Dubois’ perceived advantages in power and speed, by making what appeared to be a small ring when no one was in it look much bigger when two hulking heavyweights were. For the elegantly clumsy Joyce to create such an illusion is no mean feat.

But Dubois had his moments and, more than once, Joyce had to call on his cast iron chin to keep him out of trouble. In the second round, Daniel’s right hand scored over the top and when he started the third with a series of hefty blows, there was a brief feeling that he could overrun Joyce. The older man then bossed the fourth as Dubois’ eye worsened. Yet “DDD” entered the fifth loose and ready to fire; a hearty one-two bounced off his man before he progressed inside and unloaded to Joyce’s midsection. It was perhaps the final time he truly looked like winning the fight.

Into the sixth and Dubois’ eye was closing fast. His reddening nose also told a tale on the damage beneath his skin. Joyce paid heed and rat-a-tatted a three-punch volley into his opponent’s injuries. Dubois looked increasingly despondent on the stool, the determined stare he entered the ring with 20 minutes before replaced by obvious concern. Martin Bowers, Dubois’ coach, did his best to reignite the desire within but the fighter was losing himself in doubt and confusion. He could no longer see out of his left eye, his lungs were visibly straining to find enough oxygen to repel his exhaustion and his adoring family watched from the balcony with increasing dread.

Joyce, in turn, was growing in confidence. At the end of the ninth round he upped the pressure but he never once went ‘all out’ such was his respect for Daniel Dubois.

One shouldn’t judge the young man too harshly for his failures here. This was the first time he had experienced such pain and adversity in a boxing ring. It’s rare indeed to retain composure when met with such imposters and for a moment between the ninth and 10th rounds, he looked like he might surrender to them. Questions should be asked about the lack of medical attention he received on what was a grotesque and obvious eye injury; perhaps that was the time to take the decision out of Dubois’ hands.

But he answered the bell for the 10th. Joyce, cool and calm and with barely a mark on him, did what he’d been doing since the start. He watched and waited, he moved deftly to his right and fired the fight-ending jab which cannoned off the mound of flesh around Dubois’ eye. The favourite’s own lead scored simultaneously but he instinctively raised his glove to his blind optic and winced. Dubois dropped to a knee and the fight was over.

It’s easy now to say this bout came too soon for Dubois and, in the context of one contest, it certainly did. But in a long career, presuming Dubois can regain full fitness, this clash with Joe Joyce and his decision to end it when he did, will prove their worth.

If Dubois remains a work in progress then Joyce – the European, British and Commonwealth king – is as ready as he’ll ever be. In victory, he deserves his place among the best heavyweights on the planet. For whomever comes next, the message is simple: Write off Joe Joyce at your peril.

Promising Hamzah Sheeraz got there in the end. The super-welterweight starlet opened sharply against tough but limited Argentinian Guido Nicolas Pitto. Sheeraz raided with left hooks to the body to leave Pitto uncomfortable but the visitor rallied in the second.

Sheeraz’s jab was sharp throughout but he seemed to coast through large parts of the contest, even finding himself outworked at times during the unexciting 10-rounder.

But 21-year-old Sheeraz – who is a delight to watch when he’s in full flow and in the mood – sprang to life quite unexpectedly in the 10th and final round. A big right hand, followed by another, caused Pinto to stumble to the ropes before the Ilford fighter opened up and forced referee John Latham to call a halt at 1-11.

Chorley’s Jack Catterall stayed busy ahead of a projected shot at the winner of the 2021 super-lightweight showdown between Josh Taylor and Jose Ramirez.

The Jamie Moore-trained southpaw was impressive in spots against French-Tunisian, Abderrazak Houya. Catterall, though briefly perturbed, coped well with being cut from a clash of heads in the fourth before delivering a truly sweet left hand in the sixth.

The blow followed Houya like a heat-seeking missile, arcing in mid-flight before landing with a thud. Houya hit the deck but pluckily regained his footing. Another left floored Houya in the ninth but he held on to hear the final bell. Referee Victor Loughlin scored the bout 99-90 in Catterall’s favour.

Chapel-en-le-Frith’s Jack Massey got back to winning ways with a lopsided points win over Mohammad Ali Bayat Farid after eight rounds.

The Iranian dutifully pressed Massey – in his first bout since losing a competitive 12-rounder to Richard Riakporhe – only to be picked off by the jab. Mr Loughlin scored 79-74 in Massey’s favour.

Ladbroke Grove heavyweight David Adeleye raced to 4-0 (4) when he stopped Silsden’s Danny Whitaker at 2-09 of the second.

A hard right hand caught Whitaker high on his head in the second and dropped him. Whitaker got up, took a right uppercut that bloodied his nose, before Adeleye dropped him again with a blow to the body. As Whitaker fell, Adeleye tried to hit him and was warned by referee Mark Lyson before Whitaker’s corner signalled enough was enough.

The Verdict Joyce marches on while Dubois is left to lick sizeable wounds but both deserve credit for taking the fight.