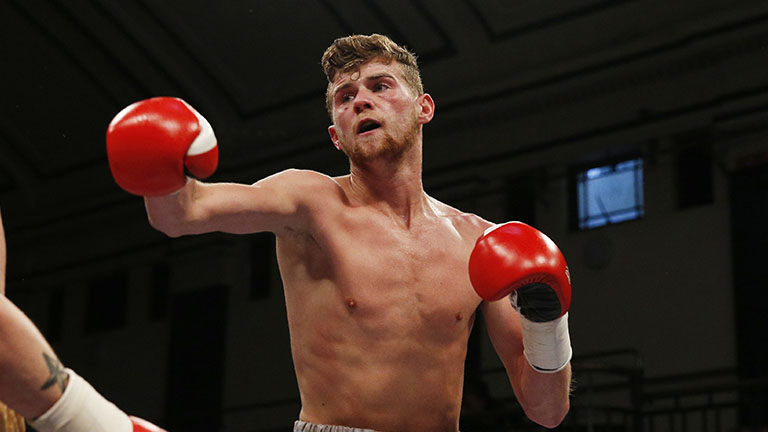 Stepping up to eight for the first time, Fitzpatrick had an aggressive foe to deal with but the quick Divis southpaw had too much in all areas. Barros pushed and bent the rules plenty, having a point docked for a head butt in the fourth by referee Pádraig Ó Reachtagáin.

However, Fitzpatrick was well able to deal with the roughhousing and, despite a cut outside the left eye, he scored a stoppage after his constant barrage of straight stinging shots which eventually led to the visitor signalling no más at the midpoint.

The win for “The Dragon” win came following a bumper 12-fight undercard which played out in front of a consistently full and atmospheric venue with a geographically diverse bevy of boxers rotating in the ring – including a number of competitive all-Irish bouts.

In a dramatic eight-rounder, Belfast-based Angolan Julio Cesar withstood a strong start from Creggan’s Sean McGlinchey to claim a fifth-round stoppage win. The momentum shifted in the fourth with McGlinchey tiring before being hit and badly hurt on the break by Cesar – who had a point docked by referee Hugh Russell Jr. Taking over, Cesar would put McGlinchey down to the body in the following round and the Commonwealth Games bronze medallist would be counted out after 1-23.

The four-round cruiserweight clash between Antrim Town’s Conor Cooke and Cork-based Pole Staz Tomasevski was pegged to be a war but Cooke was far too slick. Dominating throughout, ”Da Crook” tagged Tomasevski from the outside at will and claimed a comfortable 40-36 win on ref John Lowey’s card.

Stepping into a big domestic fight at late notice, Sallynoggin super-feather Stephen McAfee took out Larne’s Kelvin McDonald with a crunching uppercut in the third of four scheduled rounds. Breaking his nippy opponent down, McAfee targeted the body early before switching upstairs and putting McDonald down, with referee Eamonn Magill’s count reaching 10 after 1-57.

Andersonstown super-middle Conor Doherty finally made his professional debut, having seen his bow repeatedly delayed by injury. Given a tough match in big Pole Pawel Martyniuk, Doherty had to work for his 40-37 win on Mr Lowey’s ledger.

Debuting Crumlin duo Tony McGlynn and Senan Kelly, gym-mates under Pete Taylor, both got off to winning starts. Super-welter McGlynn looked to have power but had to settle for a 40-36 points win from Mr Lowey after Hungarian Dominik Csaba Karoly somehow clung on. Super-lightweight Kelly almost took off the head of Ilias Liokaftos with a left hook in the third of four scheduled rounds. The Guildford-based Greek rose and continued for a short period but the towel would soon come in and Mr Russell waved the fight off after 1-15.

Bray super-welter Eddie Treacy blasted through Victor Edagha in an action-packed four rounder. Treacy should have had a knockdown in the second while the Southwark-based, wild-swinging Italian would be deduced a point for holding in the third. “The Honey Badger” then scored two knockdowns – one with Edagha off balance and one from a huge left hand on the bell – to claim a 40-33 win on Mr Lowey’s card.

Ballygawley welterweight debutant James Lynch was always in control versus Glasgow’s Gary McGuire, slamming the body and taking a 40-36 win from Mr Magill.

The Verdict Fitzpatrick underlines his quality on busy night in Belfast.