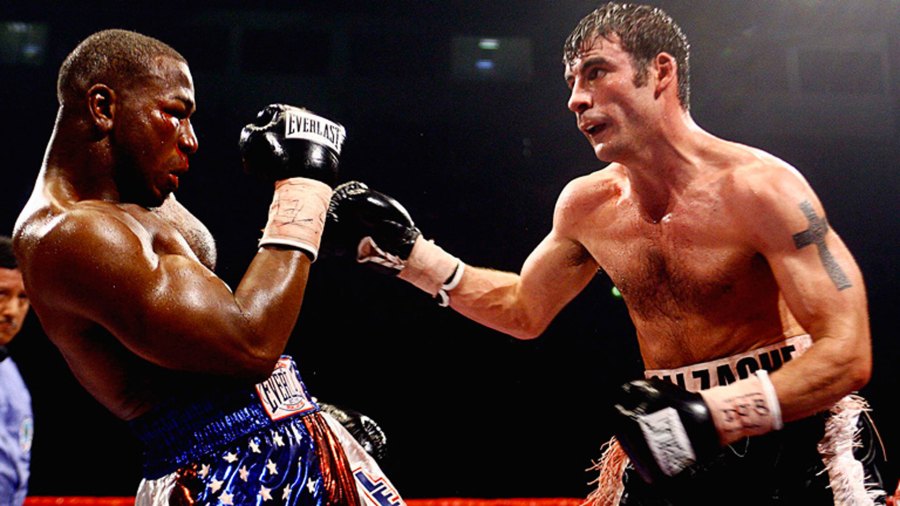 JOE CALZAGHE walked away from boxing in 2008, with a glistening 46-0 record. Even now, almost six years since he last fought, there are whispers that he will return. Here Joe explains why those rumours are always false, and how he earned a Hall of Fame plaque after years fearing he would never achieve his potential.

While filming a recent documentary you got back in the ring for the first time in years. How did that feel?

It’s the first time I’d sparred since I retired. I had some sore ribs actually off the kids, they were only about 11 years old! I thought, ‘f***! I’m getting beat up by a bunch of kids.’ I had some headaches and a few aspirins the next day.

You say you hadn’t sparred since you retired. Is that because you were concerned about getting the old bug back?

Yeah it was. Basically I’d decided before the Roy Jones fight [2008] that it was going to be my last fight. I was injured all the time and even today, I can’t punch properly with my left hand – I’ve had that many injections in it. But yeah, I was worried the bug would come back if I went back into the gym and then you fall into that ‘one more fight’ trap. I showed against Roy Jones that I still had a lot left in me, that I was still at the top of my game, and that was what I wanted – to retire at the top.

So, staying away from the boxing gym helped me. And I didn’t miss it. I didn’t miss punching people. But after about two or three years I went back on the pads and I was still sharp. I said to myself, ‘don’t even think about it.’

It was different for me. People fight for too long because of the money but I wasn’t fighting for the money at the end, I was fighting for glory and to secure my legacy. Coming back would have put all that in jeopardy.

So the boxing bug has gone forever?

Absolutely. I have no desire at all, none at all, to fight again. But even now, people still call me out. Andre Ward has been calling me out. People like Antonio Tarver, [Bernard] Hopkins, are calling me out. Listen guys, I’ve retired! It shows that I left a gap when I retired, and it shows the legacy I created is getting stronger. What can I say? Fighting at Millenium Stadium, Las Vegas and Madison Square Garden in my last three fights, in my mid-thirties, was fantastic. I started out in leisure centres. All the hard work and dedication paid off. That was it for me. I achieved everything I wanted to.

There must have been moments though, in the first months after quitting, when you considered a comeback.

Not at all. Not once. I knew I’d had enough. My body was telling me enough was enough, and my mind was telling me I’d achieved everything I set out to.I could have kept fighting – just look at the Roy Jones performance, and I know it wasn’t the Jones of old, but he wasn’t a bad Roy Jones. That was the perfect time to say goodbye.

Back in the days of the leisure centres, did you believe you could go on to craft a career that has ended up in the Hall of Fame?

The Hall of Fame is the icing on the cake, to be recognised alongside [Oscar] De La Hoya and [Felix] Trinidad in the 25th year anniversary is amazing. But there was a stage when I didn’t think it would happen. It was important to me to have the biggest fights, like against [Mikkel] Kessler – ultimately I made that fight happen. I was willing to go to Denmark because at that stage I just wanted the big fights. After [Jeff] Lacy, I fought [Peter] Manfredo and (sighs) Sakio Bika – who’s a nasty guy but no-one really knew him – and I wasn’t going to carry on fighting guys like that. I would rather have retired. So I pursued Kessler, who was the best opponent out there. After that there was only one thing left to do which was to go to the States. And that was very important to me. I went there and fought their best guys. It was good that I was in control of my career at the end because earlier, I wasn’t in control. I was WBO champion for so long and then the Lacy fight came along, and that only happened because they thought I was damaged goods – because of my hand – and that they were going to kick my arse. But God works in mysterious ways. I looked like s*** against Evans Ashira, busted my hand, and they thought I was ripe for the taking. So thanks to Gary Shaw and Jeff Lacy, they put my career on the next level.

You won the title from Chris Eubank, but after that, you were almost lying dormant in terms of world respect. How frustrating was that long period?

I had a different injury then. I had a shoulder injury and I couldn’t extend my arm so for two years, I wasn’t sparring, I was just hitting the bag. That’s when I looked awful in the ring – my timing was off. I struggled against David Starie, Rick Thonberry and Robin Reid, those guys. I was only fighting at 70 per cent.

It all came together for the Omar Sheika fight. I started sparring again before that. I stopped him in five rounds and you could see my relief after that fight.

But then frustration again. I wasn’t getting the unification fights. Even though I was beating guys like Byron Mitchell and Charles Brewer, I was p***** off. People were looking at me wondering why I was fighting this guy and ‘avoiding’ others. But that wasn’t the case. And then Lacy came along.

What are your memories of that Lacy fight?

I was injured again and I was going to pull out. But my dad told me I had to fight. I was extremely proud of the way I fought that night. I put a clinic on and dismantled him. It was my proudest performance. It was the only time in my career I was the underdog and everyone had written me off. If anything it motivated me even more to prove I was the best.

You achieved world-wide respect almost overnight. Were you aware of that?

Yeah, exactly. They had built Lacy up as the next big star. It opened up doors that had previously closed on me. Frank had tried to make the Hopkins fight before but it had fallen through. Beating Hopkins back then, who is still a champion today at 49, was a decent win.

It must be comforting now to look back on your career. But are there any regrets?

There’s no regrets. I feel blessed to have retired on my own terms and without a loss. In a way that made it easier. If I’d have lost to Jones, of course I’d have fought again. But I didn’t lose.I remember speaking to Manny Steward before the Jones fight and he asked me what I was going to do after the fight. I told him I was going to retire. I always remember him saying, ‘You have to understand if you do retire people will not appreciate it now, but in the future they will really understand and appreciate what you’ve achieved.’ Coming from Manny Steward, it really hit home. And now I’m in the Hall of Fame. It feels amazing.