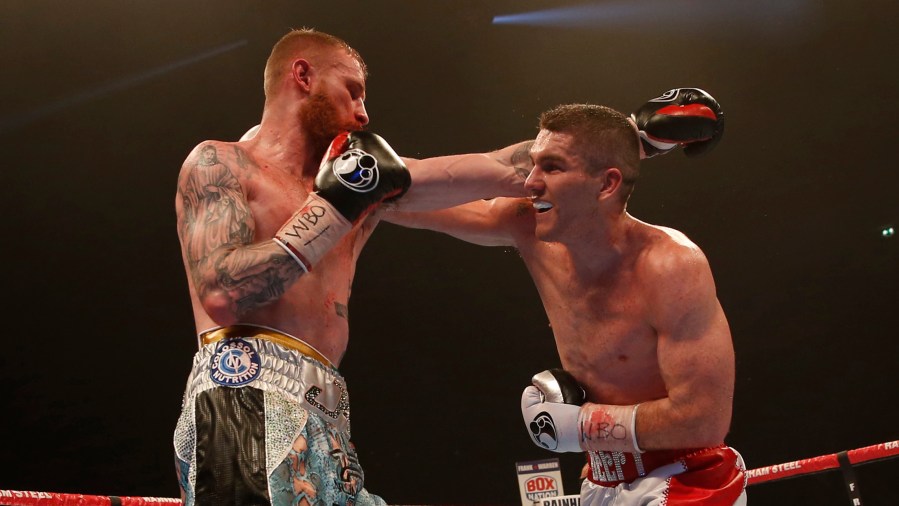 AT the tender age of 19, Manchester’s Jimmy Kilrain Kelly made his professional debut. Fast forward five years and, now 24, the super-welterweight has already claimed both the WBC Youth Silver and WBC World Youth titles followed by the WBO Inter-continental titles, winning his first sixteen on the trot.

It was a blistering 2015 for the star in the making, those Youth successes coming via impressive stoppage wins over Nodar Robakidze and Isaac Aryee respectively, however, come April 8, Kelly will play support to the fighter who has inflicted the only blemish on that record – Liam ‘Beefy’ Smith.

A member of the famed Merseyside Smith family, Beefy, at the end of 2015, stopped Kelly when the pair challenged for the WBO World super-welterweight strap. However, with Kelly having had two points deducted at the end of the sixth, Beefy went on to stop the contest minutes later.

Now Kelly will be watching on as Beefy opposes Liam Williams for the now vacant strap and hopes that, should the time arise again over the next eighteen months, he will be back challenging. In the meantime though it’s Rick Godding that stands before the Lancashire lionheart.

“I do reckon that our paths will cross again,” explained Kelly on being on Beefy’s undercard.

“I’ve just got to keep winning and they’ll keep doing their thing, of that I’m sure. On the night, yes, I’ll be watching him. I’ll win my fight, have a shower, then switch to the Smith-Williams fight and see what happens.

“Fighting Smith last time around, it was at short notice but I was already in decent shape. Looking back now though I think I rushed into it – I just hope that I can get back there and be challenging again.”

Following on from that sole loss Kelly went and joined Lee Beard, making an unexpected comeback within five months against Michael Mora. Unexpected not because of the loss, more of the surgery he’d underwent not long before. Kelly being Kelly though, he dug deep, got the win, and again and again after that, winning his last four since that fateful reverse in December 2015.

“After the loss I’d joined forces with Lee [Beard] and underwent surgery on my elbow,” Kelly continued.

“Making that comeback was a difficult one as not only did I have a lot riding on it but I’d only had surgery eight weeks beforehand as well.

“I just got in the ring and did what I could more than anything but there was certainly times last year that got me thinking. Now, although I’m not as busy as I was in 2015, I’m constantly in the gym and feel better, more composed than I was back then.

“I’m looking forward to this fight though [with Godding] and, although he’s a tricky, slick fighter who’s had some good fights of his own, I feel this could have been made for a title.

“I’ve had a good camp, and some fantastic sparring with an American who trains with champions; its good sharing the ring with someone like that. I think I’m ready again though as it’s not just about strength and power in there, there’s a lot more on the intelligence as well.”