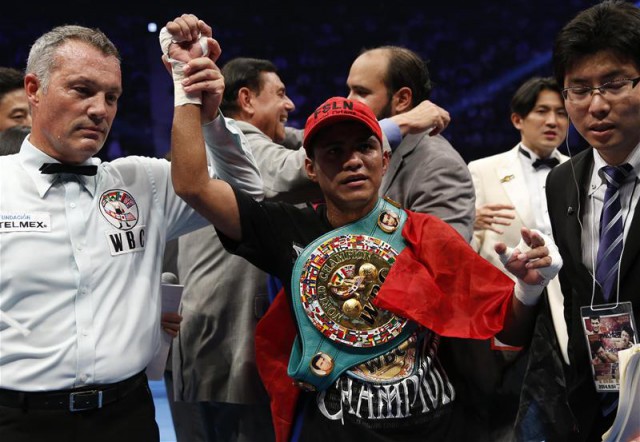 For Gonzalez, the stay-busy fight went exactly as expected. The Japanese southpaw was an eager opponent but the difference in skill and experience was immediately apparent after their first few exchanges.

Yamamoto seemed uncomfortable in front of the partisan Mexican crowd, throwing cautious jabs as Gonzalez attempted to close the distance. Midway through the round, Gonzalez began testing the waters with his signature left hand. An uppercut – left hook combination knocked down his rival, but Yamamoto argued, justifiably, that their feet tangled as he reeled to the canvas.

As the bell approached to signal the end of the opening round, Gonzalez lunged in with a powerful left hook over a lazy Yamamoto jab. The blow leveled the visitor and the official signaled the end of the fight at 2:59 of the first.

Gonzalez has signature wins against a young Fernando Montiel a decade ago and a prime Abner Mares in 2013. In the latter fight, the veteran shocked the crowd, knocking out his one-time sparring partner with the same left hook he employed this weekend against the overmatched Yamamoto.

While his last two visits to the big stage have yielded notches in the loss column, the veteran from Pachuca, Mexico, will now seek another bigger name in hopes of re-entering the conversation at super featherweight.

Expect a bout with another tough contender before Gonzalez gets another title shot. Fights against fellow veteran countryman Orlando Salido, or an always-interesting Mexico vs Puerto Rico matchup against Roman Martinez, would thrill fans of that come-forward, hard-action, style.