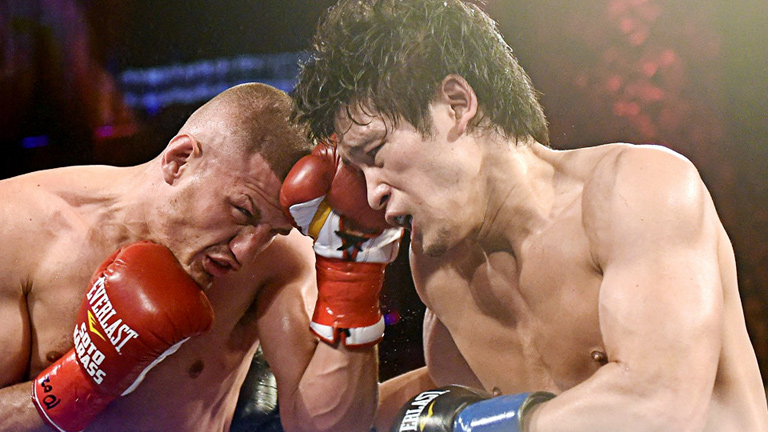 ON September 10th, the famed Forum in Inglewood, California, will host the super flyweight world championship bout between Carlos “Principe” Caudras (35-0-1, 27 KOs) and the man atop most pound for pound lists, Roman “Chocolatito” Gonzalez (45-0, 38 KOs), who, in Cuadras, will be facing the biggest test of his career.

Warming up the crowd will be Teiken alumn Yoshihiro “El Maestrito” Kamegai (26-3-2, 23 KOs) taking on Jesus “Renuente” Soto Karass (28-10-4, 18 KOs) from Los Mochis, Sinaloa, Mexico in a rematch of their April barn-burner.

The Mexican slugger spoke this week about the fight, and the opportunity to fight at the storied arena just south of Los Angeles. “I know i’m in the late stages of my career,” said Soto Karass “To fight in a venue where great fighters have fought, like Chavez Sr., great boxing legends. This signifies the best thing for me as a boxer. It’s an honor for me to fight at the Forum.”

Their first meeting, which ended in a split draw, lit up social media and left the crowd at the Belasco Theater reeling. Boxing News rated the fight as one of the best of the first half of 2016.

“My fight against him was very tough,” said Soto Karass. “He’s a great Japanese fighter. The fans expected to see a war and I think we accomplished that objective. He can hit hard and take a hard hit. The type of fighter that the more you hit him the more aggressive he gets.”

Despite his spectacular show of heart, Soto Karass received some tough love from his promoter Oscar De La Hoya immediately after the fight. “The Golden Boy” jumped into the ring and asked his fighter why he stopped using his jab when it was proving to be effective. Soto Karass had no response.

“I know it’s something that I can use,” said Soto Karass reflecting on the impromptu lesson. “I know it’s a weapon I have as a boxer. I just don’t really like it. I like to be on the inside. I like action fights but for someone like Oscar de la Hoya to ask me how come I stopped using my jab, now we’ll have another game plan for Kamegai.

However, it sounds like “Renuente,” which means “unwilling” in english, plans to be more loyal to his nickname than his promoter’s teachings when he finds himself opposite Kamegai on the night of September 10th.

“Boxing fans can expect more of the same,” said a smiling Soto Karass. “They know what type a fighter I am. The plan is to use my jab more and to be more intelligent, but the fans know that when I hear them scream. ‘Let’s go Soto!’ I transform and give the crowd what they expect, what they want to see, which is a fight.”