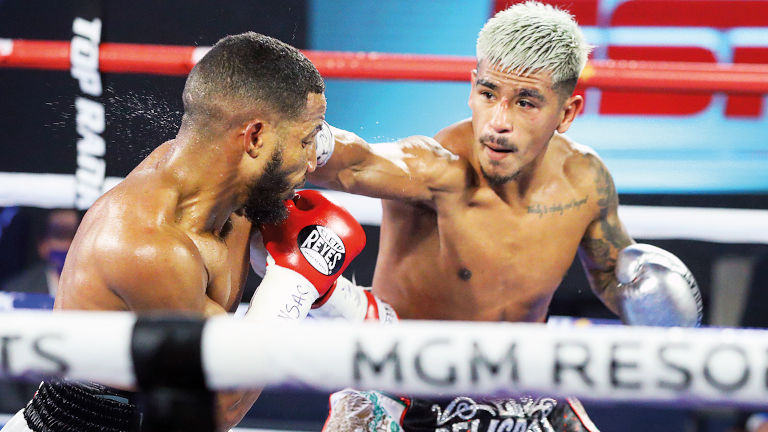 Jessie Magdaleno gets the win after repeatedly being hit low, writes Paul Wheeler

IN their second show in the space of just 48 hours, Top Rank put on another promotion at the MGM Grand Conference Center. The headliner this time was local southpaw and current WBC No. 1 featherweight contender, Jessie Magdaleno. Opposing the former WBO super-bantamweight titlist in a 128lb catchweight bout was Yenifel Vicente – a Dominican fighting out of Miami.

In the opening session of the 10-rounder, Magdaleno stabbed at his opponent with jabs up top and straight lefts to the midsection. After being lured into a corner, Vicente was hit with a rapid two-punch combination – a left downstairs followed by a right hook to the head – that deposited him onto the mat.

After struggling to come to terms with Magdaleno’s lead hand and movement in the second round, Vicente woke up a bit in the third and landed a solid left hook to the jaw. The Las Vegan took it well and proceeded to jab and move for the rest of the frame.

Having been punished for hitting below the belt on previous occasions in his career, Vicente found himself in hot water because of this again in round four. With Magdaleno up against the ropes, Vicente strayed low with a right hand. As referee Robert Byrd stepped in to call a timeout, the visitor launched another right, this time upstairs. Taken by surprise, Magdaleno crumpled to the canvas. Two points were taken from Vicente due to this indiscretion. Incredibly, upon the resumption, he connected with another low blow, leading to a third point being deducted.

Things got even worse for the man from the Caribbean when he was dropped in the fifth. After being frustrated by Magdaleno’s intelligent footwork, Vicente walked straight onto a jolting jab that sent him down. Boasting a big lead on the scorecards, the elusive and quick-fisted Magdaleno continued to pick his shots effectively in rounds six and seven.

Vicente was warned to keep his punches up in the eighth, although he did finish the round positively. Magdaleno, 28, coasted in the ninth, before the contest was brought to an abrupt halt in the 10th.

After being struck beneath the beltline once more, Magdaleno was given time to recover and Vicente was docked yet another point. The 33-year-old was fortunate to still be in the match, but when he went low again later on in the round, Mr Byrd had no option but to disqualify him. The official time of the finish was 1-38.

“He was just a dirty fighter,” said Magdaleno afterwards. “His way was to fight dirty and hit me low. He was rugged and tough. He knew what he was doing, but I was too much of a smart fighter [for him].”

Due to the coronavirus-induced shutdown of the sport, there have been far less fights than usual this year. Of the bouts that have taken place, Adam Lopez’s all-action California derby with Luis Coria has certainly been one of the most entertaining. The fiery featherweights went at each other for 10 rounds on the undercard, with Lopez ultimately prevailing on a close majority decision in a clash officiated by Kenny Bayless.

Glendale’s Lopez, 24, displayed a great jab, spiteful combinations and biting body work, while Moreno Valley’s relentless Coria, 21, set a torrid pace with his non-stop aggression and tireless engine. Despite sporting bruised and swollen features at the final bell, Lopez came out on top in terms of scoring punches, which explains why judges Tim Cheatham and Steve Weisfeld marked in his favour (both 96-94). Dave Moretti had it a draw at 95 apiece.

The Verdict Vicente’s rule-breaking ruins the main event, but the exciting Lopez-Coria fight more than makes up for it.