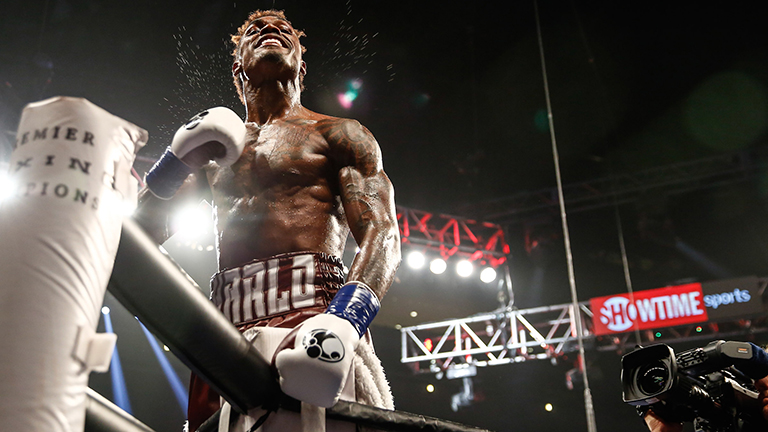 FOURTEEN months after he won the belt, Jermall Charlo’s WBC middleweight title remains one of the interim variety and will be defended for a second time against fellow American Brandon Adams this Saturday (June 29) at the NRG Arena in Houston, Texas.

The full WBC middleweight champion is Saul ‘Canelo’ Alvarez, the controversial but talented Mexican, and, frankly, it’s hard to see why Charlo’s interim version even exists given Alvarez defended his belt in May. Still, it does, it carries some sort of value, and for as long as Charlo chases a fight with Alvarez it will presumably stick around.

The belt was last defended in December, when Charlo edged a competitive fight against former amateur star Matvey Korobov in Brooklyn. That fight was closer than lopsided scorecards suggested but Charlo got the job done, kept his unbeaten record intact, and avoided falling victim to the underdog the way his twin brother, Jermell, had earlier in the night (losing to unheralded Tony Harrison). Best of all, he stayed in the hunt for bigger and better fights, the kind that will hopefully one day help Charlo become something like a household name in America.

Beating Brandon Adams, 21-2 (13) and the 2018 winner of The Contender series, won’t do the trick but it will at least keep Charlo busy and in the spotlight.

Adams, from California, was outboxed for 10 rounds by Willie Monroe in 2014 and then knocked out in two by John Thompson the following year. Though he has responded well, and is now enjoying good form, his ceiling is probably a fair bit lower than Charlo’s at this point.

Charlo, 28-0 (21), will have to be wary of overlooking Adams the way his brother may have overlooked Harrison. But, if he stays focused, he will prove too good for The Contender winner now aiming to become champion and finish matters by the halfway mark.

In other action, Erickson Lubin, 20-1 (15), hopes to build on an impressive win against Ishe Smith in February when taking on Frenchman Zakaria Attou, 29-6-2 (7), over 12 rounds. Attou, a 37-year-old who competes at fringe European title level and has yet to box in America, will do well to last the distance against a left-handed American with spite in his shots.