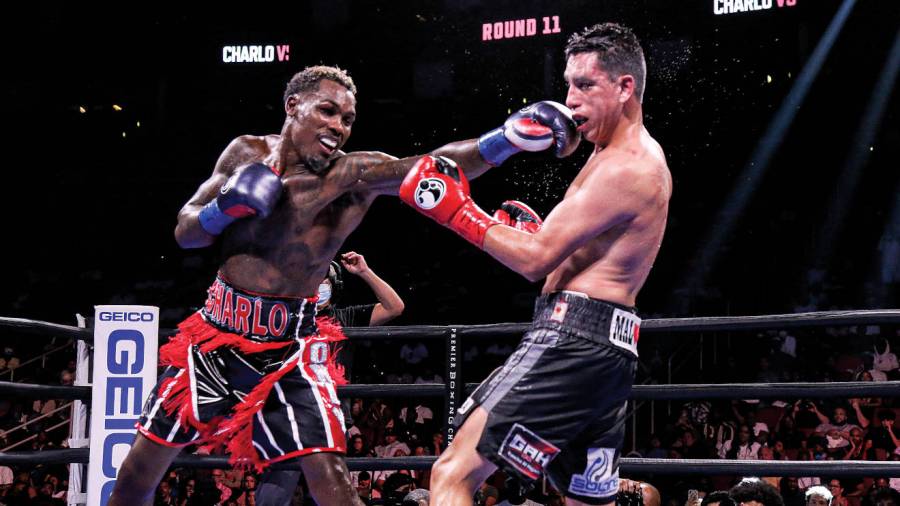 THE city of Houston has not had it easy with their sports teams recently. The Rockets and Texans are arguably the worst teams in the NBA and NFL respectively and their baseball team the Astros have been mired in scandal. But they do have the Charlo twins, Jermall and Jermell. With Covid restrictions beginning to ease, arenas are starting to fill up again. Approximately 10,000 fans turned up at the Toyota Center (PBC promoted) to see Jermall Charlo successfully defend his WBC middleweight belt by unanimous 12-round decision over Mexico’s Juan Montiel. The scores of judges Steve Murrow 119-109, Nathan Palmer 118-109, and Chris Tellez 120-108 were wide, but not indicative of the comfort level that Charlo was forced to go to obtain victory. What was expected to be nothing more than a showcase for his hometown fans instead turned into a fight in which Charlo was pushed to the limit by his supremely conditioned and determined challenger.

Going in the result seemed to be a forgone conclusion. We knew that Montiel could punch hard, but as they say all too often, there are levels to this sport and Charlo’s seemed well above his opponent’s. But Montiel’s heart and self-belief turned it into a battle of attrition few had predicted beforehand.

In terms of rounds Charlo clearly won one after the other, controlling his opponent behind a stiff jab. He was able to repeatedly hit Montiel who boxes in a straight up style. Montiel frequently alternated between fighting from the righty and lefty stances.

Montiel would take Charlo’s best blows and move forward gesturing he wanted more, but would be hurt on occasion such as in the fifth round where he was forced to cover up on the ropes.

Montiel’s eyes were bruised, but Charlo also paid a price. For the first time in his career he was cut. Jermall complained a couple of times to referee Jon Schorle when he was inadvertently hit behind the head.

At the end of the 10th round there was urgency in Montiel’s corner, telling him he could only win by knockout. And Montiel heeded the advice by going all out. A left hook to the body temporarily hurt Charlo as Montiel waged a furious charge, but the belt-holder dug down deep, as determined to retain the title as the challenger was to win it.

“The best fighters in the world make the best adjustments,” Charlo would say later.

“I know with this experience later on down the line I’ll become a world champion” opined Juan whose brother Fernando Montiel held three major belts in the lighter weight divisions.

Angelo Leo’s return to the ring for the first time since dropping his WBO super bantamweight title to Stephen Fulton was a success, albeit barely. Leo from Las Vegas, turned in a strong effort that resulted in him winning a majority 10-round decision over Mexico’s Aaron Alameda who had the advantage of not making weight, coming in a pound and a half over the contracted limit. In the end it did not matter as Leo took scores of 96-94 from judge Randy Russell (same as me), and a too wide margin of 98-92 from Eva Zaragoza. Jesse Reyes had it 95-95. Gregorio Alvarez refereed.

There were no highlights to speak of, but it was a rough fight in which Leo’s battered face gave off the impression to the crowd (who booed the decision) that he was getting the worst of it. But that was not the case. Leo waged a strong body attack and his short hooks and uppercuts scored on the inside.

Isaac Cruz’s unanimous 10 round decision over fellow Mexico City fighter and former belt holder Francisco Vargas ended uglier than it should have. With about 30 seconds remaining in the fight, a butt busted open Vargas’ right eye. After consultation with the ringside physician the referee James Green allowed the match to continue. A badly wounded Vargas was sent to the canvas seconds later for the only knockdown of the match. The bell soon rang ending the contest.

Although Cruz’s use of the head was flagrant throughout, he nevertheless earned the victory by scoring with lead left hooks throughout. Judge Reyes had it 97-92, Russell 99-90, and Zaragoza 100-89.

The Verdict Charlo overcomes a better than advertised Montiel.