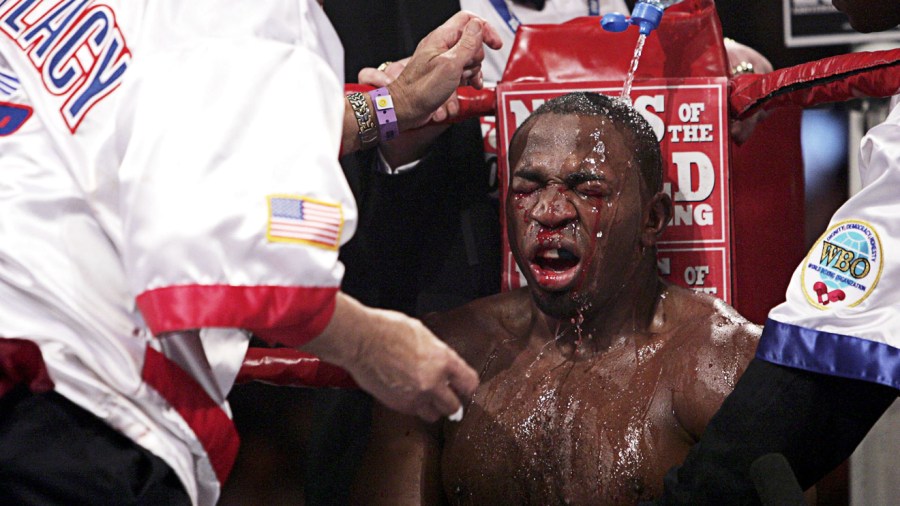 It's 14 years on from that defeat. But read the special feature where Thomas Gerbasi found out that there’s more to Jeff Lacy than just Joe Calzaghe

DESPITE competing in the 2000 Olympics for the United States, winning a world super-middleweight title that he successfully defended four times, and largely captivating the boxing world with his power and exciting style during his stay at the top, Jeff Lacy is often remembered for one night in Manchester 14 years ago, when he was the other side of Hall of Famer Joe Calzaghe’s greatest performance.

“There is no easy way in fighting, and one day, you’re gonna meet that one person – Joe Calzaghe – who’s gonna stand there and outmanoeuvre you and mentally and physically beat you in front of the world,” said Lacy.

Florida’s “Left Hook” brought a perfect pro record of 21-0 into the M.E.N Arena on March 4, 2006, a night when he was expected to tear through the Welshman and continue on his road to superstardom. It didn’t play out that way. Instead, Calzaghe dominated from start to finish, with the only thing keeping him from a shutout on the scorecards being an 11th-round point deduction by referee Raul Caiz Snr.

When it was over, Lacy lost his perfect record, his IBF title and his aura of invincibility. That’s a lot to give up in one night, but these days he doesn’t look back at his first loss with bitterness.

Unfortunately, more people aren’t talking about Lacy’s career pre-Calzaghe, and the life he’s leading now that he’s put the gloves away. First off, the Saint Petersburg native is happy and healthy and a doting father to his children. He also has an enduring love for the sport that he hopes to express through television commentary, and he doesn’t rule out training or managing fighters in the future.

“Me, I got out on top,” said Lacy, whose last official fight was a January 2015 loss to Sullivan Barrera, though he did come back for an unsanctioned bout with Tony Oakey in October 2016 that he lost as well. “Why? Because this is a brutal sport and I still have my wits about me. The only thing boxing has done to me are the bruises and the scars and the memories that I have of my bad times. But I can still say, ‘Hey, I lived the life and I’m great.’ I’m not walking on my heels, I’m playing with my kids, and I can rock on a rocking chair and say, ‘Man, everybody still respects me.’ This boxing thing is over now. I don’t have to go in there and take the wear and tear and the punches.”

A glance at Lacy these days and he still looks the part, much like many veteran pros seduced by the mirror and not the reality once they step between the ropes. Lacy knows this better than most, and maybe it was worse for him because he had reached the highest heights in the sport as both an amateur and a professional. But ultimately, he realised that his quality of life today and in the future was worth more than another payday or grasp at glory.

“One of the biggest things was that I had to let go,” he said. “We want the recognition for what we’re doing. And as we keep taking fight after fight, year after year, and we start to get that, there’s a high that comes with that. And the high that comes along with riding that lightning bolt, that’s a great high that we will always remember. But I have to be real with myself. Most fighters in that position look at how it felt and they don’t want it to end. And if you don’t understand that it does, you’re gonna hurt yourself. Even though I feel like I could do it, I’ll leave it for these up-and-coming guys.”

He laughs, recounting the conversations a fighter has with himself in those later years.

“Heck yeah, I could fight again,” said Lacy. “Do I want to fight again? No, not really. You have to know when to fold them. Because you win one, you’re gonna have to fight another and you’re stuck in that maze. ‘Hey, I only came back for one fight.’ [Pauses] ‘How much money? Okay.’ Now we’re stuck.”

This insight into the psyche of a fighter and the reality of the business will serve him well as a commentator, and it’s not surprising, given that Lacy was always accessible to the media and honest with his opinions. That’s why he was pegged for superstardom as soon as he left the Sydney Games and announced that he was turning pro. And when his name was called on fight night, he didn’t disappoint, even if it was increasingly difficult for his promoter at the time, Main Events, to get opponents and keep them in place. More than a few times, Lacy was getting informed by reporters that he had a new foe to fight, and that didn’t sit too well with the rising star.

“It was a consistent thing and I was so mad,” said Lacy, who didn’t always have smooth sailing when an opponent did make the walk to the ring. He recalls his third pro fight, against unheralded Tony Pope. On the official ledger, it reads a 2-27 stoppage win for Lacy, but there was apparently plenty of drama packed into less than three minutes.

‘The high that comes along with riding that lightning bolt, that’s a great high that we will always remember. But I have to be real with myself’

“Early on, he hit me with a hook-uppercut type shot,” said Lacy. “I caught it on my arm, and I felt the pain. It was thrown perfectly, and I was like ‘OH MY GOD, this dude can hit.’”

Subsequently, a wild exchange saw Pope tumble through the ropes with less than 90 seconds remaining in the round, and Lacy had some time to regroup.

“As he climbed back into the ring, I had some time to think and I knew I had to get this guy out of there. I said, ‘I’m not losing this fight. This is too early to take a loss in boxing.’”

Lacy went on the attack, and a left hook did the job on Pope and on the man throwing it, as he broke his left hand with the punch that cut Pope bad enough to halt the fight.

“It took my mindset to another place,” he said of the bout. “It’s like me giving you a new car that you’ve always wanted and then you get to drive it for three days and it’s taken away from you. You’re gonna fight for it. That’s the way I felt. I hit him with everything.”

Splitting an opponent’s face with a single blow only added to the Lacy mystique, which was created in January 2001 thanks to the boxer formerly known as Kevin Butts, but who now goes by the name Yameen Islam Muhammad.

Scheduled to be Lacy’s first pro opponent, Butts caught up to his opponent after the weigh-in before the fight.

“He came over to me before I went up to go to sleep and said, ‘Good luck in your career,’” Lacy recalled with a chuckle. “I’m scratching my head after he walked away. He didn’t say he was leaving, he just wished me good luck with my career. I thought, ‘Wow, that’s weird. Is that a scare tactic?’ I was thinking about it all night. Man, he’s bold. What did he mean by that? Now I never run from a fight. I’m a kid from the ghetto. And my attitude was that you can fight really good, but you didn’t fight me yet and I’m gonna show you something. But I thought I’m gonna have to bring my A-plus, plus, plus game for him because this guy could hit me with something I ain’t ever seen. Did I even do enough training for this guy?”

All the worry was for naught, as Butts left in the middle of the night and never returned. Lacy’s opponent was gone.

The story was almost better than a fight would have been, and Lacy didn’t put any dents in his growing legend as he rose up the ranks. In his 18th fight, he halted Syd Vanderpool in eight rounds to win the vacant IBF super-middleweight title, and he defended the belt with wins over Omar Sheika, Rubin Williams, Robin Reid and Scott Pemberton, before running into Calzaghe.

Again, he’s not looking back at the bout with any feelings of regret. Fight fans may look at it as his defining moment in the sport, but he won’t.

“The only reason I get disappointed about that fight is because people who were not in the ring that night cannot get over that night,” he said. “I have. I’m disappointed that everybody else can’t. I moved on with my life. Everybody else is sour. How crazy is that? Calzaghe didn’t do anything different than 32 other fighters did to me. He hit me.”

It doesn’t take long to realise that Lacy is clearly at peace with a career that left him with a 27-6 (18) record, with one No Contest. He only mustered a 6-5 record after the Calzaghe loss, with notable defeats coming at the hands of Roy Jones Jnr and Jermain Taylor, but for the former world champ, it’s not always about wins or losses, but on what you show during those good times and bad times.

“I’m fighting a guy in another country and he’s got fans too,” he said of March 4, 2006. “But when the magic came was when I had to go through those trying times and these UK fans, they saw me still standing in the same place after the darkness came. After all of it, I was still there. I opened up my heart to everybody to say, ‘Hey, look what I’m built of.’ And most fighters don’t do that.”