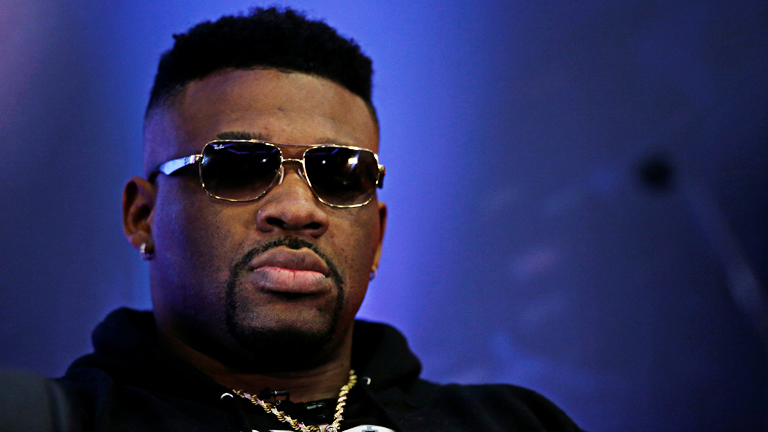 Jarrell Miller's failed performance-enhancing drug test ahead of his June 1 fight against Anthony Joshua begs the question: Who is clean in the heavyweight division?

ANOTHER day, another failed performance-enhancing drug test in the toxic heavyweight division.

The latest man to have allegedly tried gaining an unfair advantage is Brooklyn’s Jarrell Miller, someone who last month accused his next opponent, Anthony Joshua, of being the “Lance Armstrong of boxing”, and poured scorn on the legacies of both Klitschko brothers [Wladimir and Vitali] in the same breath. Miller has, according to a VADA test result, been messing around with endurabol, a steroid, and evidently wasn’t smart enough to get away with it.

Alas, in a bizarre twist of fate, Miller, the Floyd Landis [or any other Armstrong-competing cyclist] of the piece, has seemingly scuppered a reported $6 million windfall by falling foul of the very thing he accused Joshua of doing. For ‘Big Baby’, it’s probably for the best if his dummy goes back in.

Whether Joshua still fights Miller or not remains to be seen and presumably hinges on the result of the B sample coming back positive or negative. Most likely, though, if the adverse VADA test findings hold up, Joshua will proceed with his June 1 date at Madison Square Garden, New York, but oppose someone else. Perhaps he will defend his three belts [WBA, IBF and WBO] against another American, someone like Michael Hunter, who recently signed with Joshua’s promoter, Matchroom Boxing, or instead look to Poland’s Adam Kownacki, whose unbeaten record will, like Miller, make him look good on the poster.

One thing we do know for sure, as news of Miller’s goof sinks in, is that the heavyweight division is rotten to its core and that the problem of drug cheats permeates. In fact, one could argue we’re at the point now where it’s safe to say the men not relying on PEDs to get them through fights are the foolish ones and that the cleverest of the lot are the ones who do it and don’t get caught. A depressing, shameful thought, I know.

Certainly, in the case of Miller, 30, there was no doubting his conviction when he said Joshua had been aided by PEDs since turning professional. He hammered the point home when the pair met at a pre-fight press conference in New York and then doubled down on the accusation when the pair reconvened in London.

Maybe, in hindsight, he did so because he required a smokescreen and a distraction from his own transgressions on that front. Or maybe he did so because he was merely pre-empting what was to come, knowing there was a good chance he would get popped for misbehaving and pleading, early on, for forgiveness on the basis that everyone out there is doing the same. Maybe, in the end, Miller, a man who failed a test for methylhexaneamine back in his kickboxing days, believed it was the only way he could manufacture a level playing field.

Whatever the reason for his outburst, the Armstrong comments were pertinent. More than just a slight on Joshua, someone who has so far not failed a test in his career, the reference to Armstrong acted as an acceptance of the fact boxing, like cycling, has fast become a sport in which competitors feel a need to take drugs to be successful.

To emphasise the extent of the problem, especially at heavyweight, here is a highly unofficial top 10 comprising heavyweights who have so far avoided running into trouble with drug testers.

It makes for bleak reading, particularly when you consider the many names absent, but, frankly, drawing up a list is the only way of keeping tabs; the only way to remember who has done what and which fighters have found forgiveness easier to come by than others.

That said, just because a heavyweight has yet to piss dirty does not mean they are clean nor mean we should hold them up as some beacon of perfection and convince ourselves they’re not all bad. It might just be a case of right place, right time. They might just do it better than the others. But if we don’t lean on the ones yet to find themselves caught out, and place some sort of blind faith in the admittedly flimsy notion that clean heavyweights still exist, what hope have we got?

Boxing, more than any other sport, has a habit of forgiving and forgetting and letting in those who should have been locked out for good. At least with this top 10, as pointless as it seems, makes conspicuous those contenders it omits. That’s something at least.