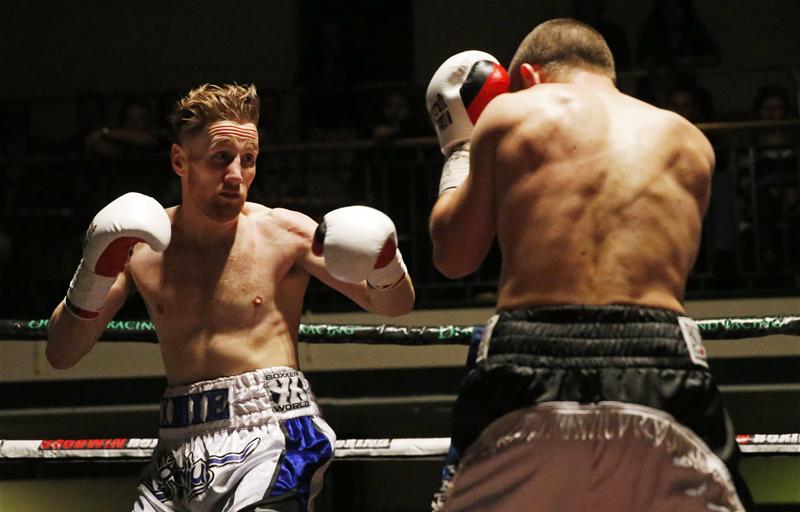 THE ever-lengthening reach of the Goodwins extends to Torquay on October 22 with ‘New Era’ at the Riviera International Centre, a bill topped by an intriguing match for the Southern Area featherweight belt between Devon’s highly experienced road warrior Jamie Speight (13 wins, 9 losses) and Portsmouth’s touted Lucas Ballingall (5 wins). Jointly promoted with Devon trainer Jack Green, the show is a rare chance for the likeable 28 year old Speight to perform in from of his home fans, and one heck of a challenge for the quietly spoken 19 year old Ballingall who is unbeaten in all of his five contests and has yet to proceed between four rounds, having stopped Georgia’s Mikheil Soloninkini in a scheduled six rounder last July. Stepping in to what will be a veritable lion’s den Ballingall will require every ounce of maturity and focus if he is to pull off the win against the super-fit Speight and become one of the youngest Area champions ever (Manchester’s Jackie Brown won the Northern Area title at fly in 1929 aged 19 years), but should he do it he’ll justify the faith held in him not only by his team, but also of some of the top names in the game who have sparred him and remarked on his potential.

Yet having potential and fulfilling it are two very different things, and the Devonian has very different plans for his Pompey rival. Two-time Southern Area champion Speight (super-bantam and feather) has been out for some months following a disappointing performance against Hackney’s Matthew Chanda, a fight that led him to briefly contemplate retirement: “I haven’t boxed since March because I needed a break, and it’s the first rest I’ve had since I turned pro seven and a half years ago. I’ve never really had more than a week off between fights and it was long overdue. In my last fight I struggled to make the weight and had nothing left in the tank, so come fight night I boxed like a muppet, lost, and decided I needed a rest to work out what I wanted to do. It was disappointment at myself and misery at the result that made me think of knocking it on the head, but after a couple of months I was bored just sitting around and got back into the gym. Now I’m back, I’m hungry, and I can’t wait for the fight. I’ve been sparring Lee Haskins regularly as he prepared to defend his world title, also Lee and Andrew Selby and I feel sharp!”

The prospect of home advantage after so long on the road has the Devon scaffolder stoked: “It’s so refreshing to be boxing on a home show. For the last five years I’ve boxed away from home, Liverpool, London, Bristol everywhere but home. It’s great to have another title shot, and it’s good for all the people who support me and follow me all over the country to not have to travel miles.” Trained by Jack Green at the Champs Gym in Newton Abbott and managed by Steve Goodwin, Speight may have the overwhelming edge in experience but having listened to the reports of Ballingall’s talent he’s in no danger of underestimating his young challenger: “It takes bottle on his part to come and challenge me in my own back-yard, and I’ve said as much on Facebook. He’s a young lad away from home and to take a fight with someone of my experience, well, you’ve got to take your hat off to him. I’ve done exactly the same thing. I’ve had to. I’ve watched quite a bit of Lucas especially his last fight, and every time I watch it I pick up something new and it’s helpful in putting a gameplan together. He’s very tall and lanky for the weight, works well at range, throws a lot of long shots and uses his height advantage really well, and that’s what I’ve got to work around on the night. But it’s mine and Jack’s job to find his flaws. No-one’s perfect, everyone has flaws and it’s my job to exploit them as best I can on the night and it’s his to do the same with me.

“I’m extremely confident of winning. Not over-confident but I know the task in hand. I know exactly what I’ve got to do and I’m willing to put it all on the line. My experience is going to be a big factor I think, and being in front of my homecrowd is something I haven’t been able to feed off for a long time. It’s a daunting task for a young lad like Lucas, and when he comes out to boo’s and heckles that may have an effect. It’s also his first ten rounder so there’s a few factors Lucas will have to deal with, but he’s a professional at the end of the day and I’m sure he’ll come out and give it his all.

“I won’t say how but it’s going to be a Jamie Speight win after a very well contested and entertaining fight. My ambition in boxing has always been the same and remains so, to fight for the Lonsdale belt. Win, lose or draw I’d be able to retire a happy man.”

Youthful apprentice Ballingall is oozing quiet confidence ahead of the contest, and is fully committed to returning to the island city with his first major title. The unbeaten featherweight has created a swirl of expectation around his fledgling career, but he’s taking it in his stride: “There is a bit of pressure on me to succeed, but I think I can go all the way. If I continue to take it as seriously as I do, there’s no stopping me. The better opponent I have the better I perform. Jamie will be my sixth fight and to be only 19 and boxing for the Southern Area is fantastic, I’m over the moon. A lot of people may think it’s too early but I’ve been sparring some of the best in the world like Ant Crolla and Lee Selby, and if I can hold my own with them then I’m more than ready to step up to Southern Area level. It’s really exciting and when I win this fight – not if, when – it’s going to open up some doors. Jamie Speight is no idiot and he’s been around a long time. A two-time Area champ and he’s boxed for the English, so beating him in his home town will make a statement.

“We’d been hoping to get a Southern Area shot before the end of this year, and the fight with Soloninkini was about getting some rounds in although it didn’t work out that way because I stopped him in the fourth. I’ve always known who Jamie Speight is, and I remember when he lost the Southern Area super-bantam against Jon Fernandes and that was a close fight. If you’re an average lad he’ll beat you but at the higher level he gets beaten by the better lads. He’s a stepping stone, but he does represent a big challenge for me though. When he fought Isaac Lowe Jamie gave him a lot of trouble because he’s so fit and has great ringcraft. So he’s no mug, definitely not, and by far he’ll be the best I’ve boxed so far. He’s had a lot more fights and has a lot of experience, but he’s been in quite a few hard fights already.”

Seemingly unconcerned at the prospect of being the away fighter for the first time Ballingall says: “It doesn’t really make me nervous going into his backyard for the fight, if anything he’ll be more nervous because it’s in front of all his home fans. I’d rather box away than in front of my friends or family because it’s more pressure on you – no-one wants to lose in front of friends and family. He’s always been the underdog too, so again no pressure, but now I’m the underdog and he’s the favourite. The pressure’s on him. I think I’m technically better to be honest, and I’m bigger and stronger. He calls himself ‘The Genius’, but he’s not. He’s a good boxer and his best attribute is his fitness, and as long as I’m just as fit there’s no way he can beat me. He’s only had one stoppage so he’s not a big puncher, and I’ve never been hurt either in sparring or a fight so I don’t see how he can possibly knock me out. I reckon I’ll stop Jamie late on in the fight. He’s very durable but I think I’ll be too strong for him, and I’m going to get him out of there.”

Ballingall’s father, trainer and manager Michael is also optimistic of his son rising to the challenge: “It’s the quality of people he’s capable of moving about with at just nineteen years of age that gives me confidence. He gets great feedback from the boxers and their trainers and we know we’re heading in the right direction with Lucas. His variety of punches is excellent but he also has great reflexes, good hand-speed and he can punch a bit too. He uses his height and reach to good advantage as well.  I’ve watched Jamie Speight from the beginning and I also trained Jon Fernandes for his fight with Jamie (Southampton’s Fernandes won on points in 2012). Jamie’s very tough, wears his heart on his sleeve and he’s got a very, very good engine. He’s got a lot to think about on the night though, he’s under pressure to come out in front of his home crowd and look good. In the professional ring Jamie’s got the greater experience by far, but what he doesn’t have is the quality and that makes it a 50-50 fight. Lucas has the talent while Jamie has the experience, but Lucas has a good head on his shoulders and going into Jamie’s home town won’t be a factor. When my daughter was being born in Liverpool Lucas went by himself to spar Gary Buckland and Lee Selby, that’s the kind of lad he is, very mature and confident.

“I believe Jamie will be in the best condition of his life. He knows this is his last chance, and not only that, but it’s on his home ground. I know Jamie will look at the fact that Lucas has gone more than four rounds and consider that a big advantage, but trust me, it’s not, and Lucas will do ten rounds without a problem. We haven’t got anything to lose and it’s going to be a great fight.”