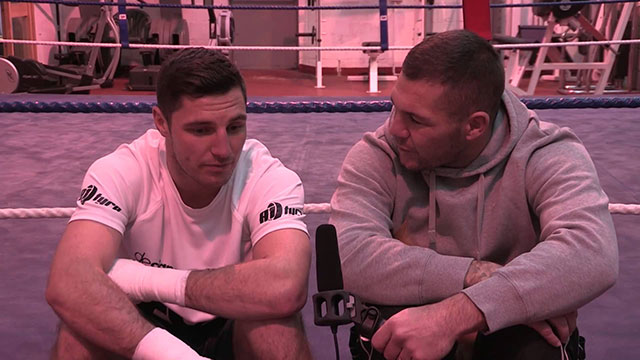 TOMMY COYLE is in the best shape he has ever been in, according to his trainer Jamie Moore, as he readies himself for the biggest test of his career.

The Hull lightweight, whose record currently stands at 19-2, will defend his IBF International lightweight title at the Hull Ice Arena on Matchroom’s “Point of No Return” show.

Coyle will be back at the venue where he fought Daniel Brizuela in a “Fight of the Year” contender in February, but Moore says any mistakes he made in that fight have been well and truly ironed out.

Moore said: “Tommy made a few mistakes against Brizuela, but we started to put them right in training and this has quite honestly been the best camp we’ve had.

“He’s been doing everything I’ve asked of him and he’s been a completely different class this time around. Before Tommy lacked a bit of discipline going into camp and in fights, which you could see as he was dragged into a fight too often.

“But, this time he really is spot on. He was in a much better shape going into the start of camp and he’s given himself the best possible chance of winning on Saturday.”

It will also be an important night for Moore as he continues his recovery from his injuries from the summer, when he was shot in Marbella whilst training Matthew Macklin.

But Moore said that he is now ready to start leading the corners once again and is well on the way to recovery.

He said: “I’ve made sure I haven’t rushed back and taken my time, but I’m ready to get back in there. We’ve got a young fighter called Andy Colquhoun and I ran his corner at the weekend to see if I was ready to be jumping up and down into the ring.

“He was only in a fou- rounder, but it was my little test drive ready for Tommy’s fight. I passed it with flying colours though and come Saturday with Tommy it will be all guns blazing.”