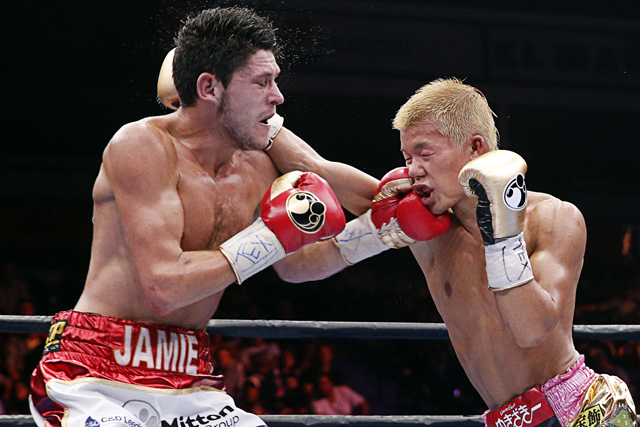 WELL enough has been said about the flop, I mean, the fight of the century. Let’s get back to the real world.

I was going to start off this week with Anthony Joshua but it wouldn’t be fair to Jamie McDonnell defending his WBA bantamweight title in America, with an American referee. Certainly, things seemed to be stacked in unbeaten challenger Tomoki Kameda’s favour. We also had commentator Jim Watt telling us throughout the fight that any rounds that were close would be scored for the local fighter (Japan’s Kameda trains over the border in Mexico).

Slow starter Jamie lived up to his reputation, and took a count of eight in the third round after a heavy knockdown, but he has an engine like the flying Scotsman, and gradually worked his way back into the fight. His continuous pressure was starting to pay off as the fight progressed, as Kameda seemed to be tiring and his speed was waning. I sat on the edge of my seat hoping he could get a knockdown, wondering how the judges were scoring it, and wishing Jim Watt’s glass was half-full instead of being half-empty. What a fight it was though! And there was more excitement to be had in waiting for the verdict than there was in the whole of Floyd Mayweather vs Manny Pacquiao put together. Well done Jamie – what a shot in the arm for British boxing.

I can’t leave it at that without commenting on Ricky Burns’ gigantic effort against Omar Figueroa, written off by all including myself – which was not surprising considering his results from his last four fights – but he dug in messed Omar about, hit him wherever he could legally and illegally. Although Ricky lost he reinvented himself and good luck to him he’s got a second chance in his career and to put away a bit of dough away for a rainy day.

Now back to Joshua. To be honest didn’t have much to beat, but he can only dispatch whatever is put in front of him and that’s what he did, he softened his opponent up with that bludgeoning straight left, then knocked him out with a right hand over the top and it was Goodnight Vienna. He does need to step up in class now, so after Kevin Johnson and I would like to see him in with David Price (far from an easy task), crafty and highly-ranked Tony Thompson, then Kubrat Pulev, and then Rule Britannia.