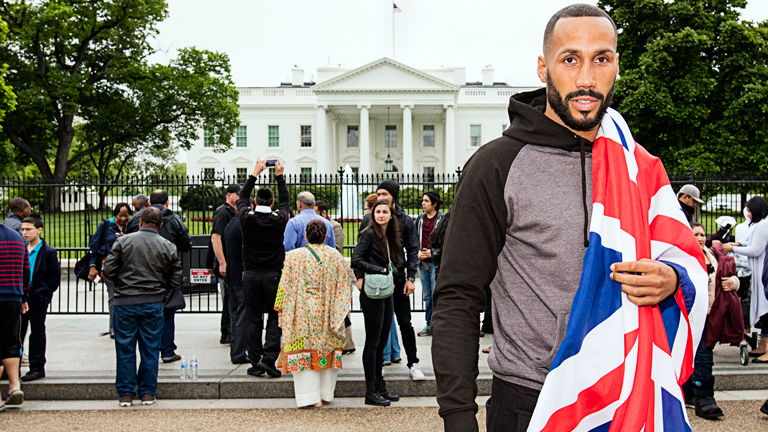 James DeGale is eyeing huge fights, but refuses to look past Badou Jack

The Londoner’s unification fight with Jack takes place at the Barclays Center in Brooklyn, New York and the match-up had been in the pipeline for about a year before it was confirmed a few weeks ago.

With former 168lbs king Ward dethroning WBA, WBO and IBF light-heavyweight champion Sergey Kovalev this past weekend, DeGale is eager to test his mettle against the fellow Olympic champion.

“It may sound crazy but I even fancy a fight with Ward. Two Olympic gold medallists, I don’t know if we could do a catchweight or he could come back down. Can you imagine that? The unified light-heavyweight champion and the unified super-middleweight champion. Trust me, I’ll speak to Al [Haymon, his advisor] about it.”

Ward’s last fight at super-middleweight – where he beat the likes of Carl Froch, Mikkel Kessler and Arthur Abraham – came in 2013 when he routed Edwin Rodriguez.

That preceded his unfortunare hiatus from the sport, which he ended last year before moving up to light-heavyweight to set up his blockbuster clash with Kovalev.

However back in 2013 – before DeGale picked up his world title – the Brit claims he came close to fighting ‘Son of God’.

“When he [Ward] was going to box [Edwin] Rodriguez, they offered me the fight with Ward and I took the fight,” he continued.

“So when they were sorting out the Rodriguez fight, they offered me the Ward fight and I accepted. But it didn’t work out.

“I think he can still do super-middle. I want these big fights, ‘The Night of Gold’, that would be some night. I have to get through Badou Jack first, and if I get through him there are a lot of big fights there. The next four years, that’s when I’ve got to work hard, get the big fights, earn my money and run.”

While the 30-year-old has lofty aspirations, he is not neglecting the immediate threat of Jack. The pair both boxed on the same show in April as a part of the promotion to their mooted unification fight and, with both men keeping hold of their titles, it seemed everything was set.

However things went quiet for a few months while issues were ironed out, but last month US broadcaster Showtime announced the fight as a part of its outstanding upcoming schedule.

Though DeGale had other options pushed his way, he did not sway from his intention of unifying the division and cementing his status as the best super-middleweight in the world – even if it meant taking a pay cut.

“I signed with Al Haymon and we had a plan, and this was the third fight in the plan, so I was confident it would happen,” DeGale said.

“I boxed in April and there was a big gap and all this messing about and I thought, ‘does Badou Jack really want it?’ I give a lot of props to Al Haymon for getting it sorted because there was a time where I thought it wouldn’t happen.

“Al did put a couple of names forward for me to box for better money, but I wanted this fight. I’m not getting a massive, massive purse for this. I’m getting paid well, but it’s not a career-best. Hopefully I’ll get respect and people will know that I want to fight the best and get all the accolades.”