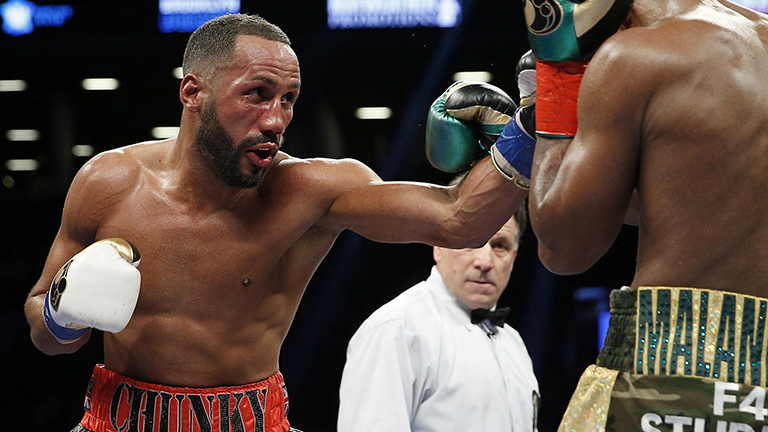 JAMES DeGALE will defy his critics and come back better than ever after recovering from an operation which solved a long-term shoulder injury, according to his trainer Jim McDonnell.

DeGale underwent surgery earlier this month on his right shoulder, during which a 180 degree tear was found – extending his projected recovery time.

He last fought in January, battling to a draw with Badou Jack in a gruelling fight, and McDonnell – who has trained James for his entire professional career – cannot wait to see the improvements his charge will make once he’s back in the gym.

“It’s just wear and tear over the years, he’s had [the injury] for a while now. People don’t realise how good he is, he’s literally boxed as a wounded soldier. Obviously he’s done his training and everything but it plays with your subconscious at the back of your mind,” he told Boxing News.

“I’m just so excited about how good he’s going to be. As good as he is, he’s mustard, even in the Badou Jack fight, he’s better.

“James is so strong. Mentally, he’s so strong. He’s the strongest boxer, mentally, I’ve ever met. He defies everything. To do the things he’s done is incredible. Sport at the top level is 80 per cent mental, James is 100 per cent mental, and that’s what gives him an advantage over everyone.”

Op was bigger than expected. They found a 180 degree tear Bit of a longer recovery but still hoping to fight this year pic.twitter.com/3bYdFS04P2

‘Chunky’ made history in 2015 when he became the first British boxer in history to win both an Olympic gold medal and a professional world title by outpointing Andre Dirrell for the IBF super-middleweight belt.

He came close to fighting unbeaten Liverpudlian Callum Smith this summer and is hoping to meet WBA super-middleweight champion George Groves in a mouth-watering rematch of their 2011 encounter in the near future.

Beside his natural talent, McDonnell is keen to point out another attribute of James’ – his commitment to hard work.

“Everything he does, even training, is relentless. People don’t see that, they see a kid with lots of talent and skill but he is a machine,” he continued.

For now though, he has to rest and let his shoulder completely heal before resuming his career. He and his team hope he can return to action before the end of the year, at which point McDonnell expects to see an even better fighter.

“It’s basically rehab at the moment. Rest and recovery, taking it easy. You can’t run before you can walk so as long as he’s patient, he’ll be a beast,” he said.

“He’ll be the best he’s ever been, he’ll be like an animal. Just thinking about how good he is, I think: ‘how did you do that with an injury? Most fighters couldn’t do that with three arms.’ I think we’ll see the best of him.”