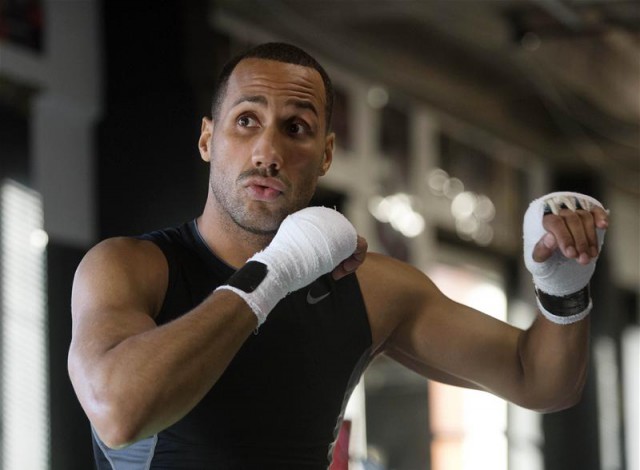 And it could be for the IBF super-middleweight title, if Carl Froch vacates the belt, writes John Dennen

MATCHROOM will hold another show at the O2 arena in London on April 25. Promoter Eddie Hearn envisages James DeGale fighting Andre Dirrell for the vacant IBF super-middleweight world title on the bill, if Carl Froch vacates the belt.

“Froch has got to make the decision on his IBF [title],” said Hearn. “The likeliehood is that he’ll probably vacate that because of his injury. James DeGale will fight for the vacant title. We’re just dealing with that at the moment.

“He’ll fight the next available [contender]. If you look at the rankings you’ve got James DeGale, Andre Dirrell, Gilberto Ramirez, George Groves.”

Hearn is confident Dirrell could be brought to England. “I think he may not have any choice. 50-50 split, what draw has he got in America versus James DeGale’s draw here? I don’t see how we can’t win the purse bids for that fight. I think he’s a cast iron favourite to have the fight in England, we’ve got April 25 booked at the O2 and that’s where we want to do the fight. A great fight… It’s a high stakes fight,” he said.

“Where James has been hanging around, he doesn’t care, he’ll fight anyone. If Dirrell’s next, he’ll fight Dirrell. His confidence levels, at the moment he’ll fight anyone. Ramirez didn’t look great [in his last fight], an unbeaten Mexican southpaw. But would he want the fight? I think they’re still building him a little bit.”

If Carl Froch vacates the belt, it doesn’t mean he would retire from the sport. “He’s at the stage of his career where he doesn’t need belts. He doesn’t like vacating titles. He’s got a bad elbow. He can’t really fight till probably June. He doesn’t see DeGale as the fight he really wants. If he is going to fight again it’ll only be a fight that makes him go, ‘I fancy that.’ Unless we get him one those fights, he won’t fight again,” the promoter said.

That fight looked to be against Julio Cesar Chavez Jnr in Las Vegas at the end of March. “I had it done,” Hearn sighed. “[Froch] got everything he wanted really but it took a long time. I’ve been working on it since June last year.

“He made the right decision [to pull out] but a frustrating decision.”

Chavez will now fight Andrzej Fonfara on April 18. But there could be other options for Froch. “A lot of people are talking about [Bernard] Hopkins. HBO really like the Hopkins fight. I don’t think [it would be a bad fight] because I think Froch will just stick it on him. I guess for a wider audience and when Hopkins comes over and starts yapping, it’s a big fight,” the promoter suggested.

He doesn’t expect Froch to retire, but nor does he expect Carl to rush back. “I think he’ll fight again. He’ll wait for the right opportunity,” Hearn said. “That could come in May, June, July, September.

“If he boxes in England it’ll be at the City ground, that’ll be a great event, if he boxes in America, it’ll be Vegas against Chavez.”

FOR THE FULL RINGSIDE REPORT FROM THE LATEST SHOW AT THE O2 DON’T MISS THIS WEEK’S ISSUE OF BOXING NEWS.